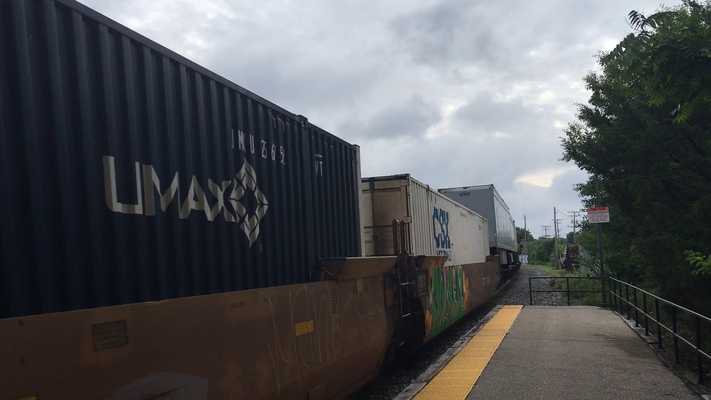 US Class I railroads are set to face tough questions over domestic intermodal service and pricing following the release of second-quarter (Q2) earning results.

Beyond US intermodal volume falling 4.6 percent, largely due to decreased domestic intermodal shipments, a recent shipper survey and multiple conversations with cargo owners signal a reduced appetite for shipping via 53-foot containers and trailers for the second half.

“The second quarter was the deepest quarter of demand disappointment against our rail volume expectations that we can recall at least since 2016,” said Bascome Majors, an analyst with Susquehanna Financial. “Simply put, rail customers ... are shipping less product than either they or their rail providers expected.”

But it seems like they’re happier with the levels of service. Sixty-eight percent of shippers rated service as good or excellent compared with 55 percent in Q1, according to a Cowen Inc. survey. The number of shippers calling service 'poor' dropped from 11 percent to 6 percent. Shippers even offered higher grades to Union Pacific Railroad, which reported intermodal train speeds slowed 6.3 percent year over year in Q2.

One drayage terminal manager with Horizon Freight Systems told JOC.com that he strongly prefers UP’s Global 4 terminal to BNSF’s Logistics Park Chicago and Lot 16 facilities. BNSF has been beset by mismatches of containers on the wrong chassis and long truck lines to drop off empty boxes, but the railroad said it’s working to alleviate issues in both locations in Elwood, Illinois.

Some railroads will credit precision scheduled railroading for service improvements, while skeptics believe service becomes more reliable as volume dwindles because there are fewer opportunities for error.

There’s no ignoring the macroeconomic environment that feeds into the freight market.

“We expect the buzzword of the season to be ‘uncertainty’. No company will want to be overly negative, as the broader economy feels healthy and the consumer seems fine, but transport companies cannot ignore how bad freight has been year to date,” wrote Citigroup analyst Christian Wetherbee in a rail earnings preview.

And even if service were better, this uncertainty means there will be fewer truck-to-rail conversions. One year ago, a quarter of shippers told Cowen that they would increase their intermodal loads more than 10 percent if service were better. Today only 12 percent would tender as much. Meanwhile 66 percent of shippers would tender less than 5 percent additional volume to the rails, up from 46 percent a year ago. So the upside for good service isn’t as rosy as it once was.

Will there be a mood change?

“The Purchasing Manager Index that we follow hit 55, which is up from the previous month — which is strong — so that tells me that people are going to be buying things in the future; that with a late spring and hopefully we can get the tariff noise out of the way,” he said in the Q1 earnings call. That did not happen based on data from the Association of American Railroads, Intermodal Association of North America, or the Cass Freight Index.

“We think the rails and intermodal marketing companies [such as J.B. Hunt and Hub] will continue to suggest volumes can return to growth in the second half of 2019, which we think will be met with investor skepticism,” Long wrote in his earnings preview.

Intermodal analysts such as Larry Gross with Gross Transportation Consulting forecast the industry will be unable to dig out of the hole until at least 2020.

“Last year, intermodal benefited from the ELD [electronic logging device] crisis. Demand was inexhaustible no matter what changes the railroads made. But as quickly as they arrived, those days are now gone,” Gross wrote in a recent JOC.com column. “That situation is not going to change in the foreseeable future … [but] if history is any guide, then in time the pendulum will swing. When that will happen and how the industry will be re-shaped in the meantime is open to debate.”