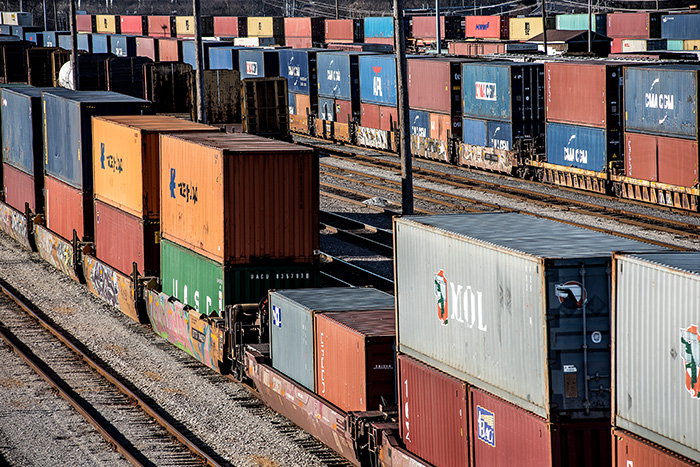 In recent months, the pace of growth in intermodal domestic container loadings has been slowing. But the top-line figure has masked a significant divergence in the performance of the two sectors that make up the fleet. Simply put, privately owned domestic containers are outperforming rail-owned units.

At the end of 2018, rail-owned domestic containers comprised just about one-third of the total US domestic container population. The vast bulk of these are contained in two fleets: EMP (Union Pacific Railroad and Norfolk Southern Railway) and UMAX (UP and CSX Transportation). The other two-thirds of the US fleet are privately owned units, operated by such companies as J.B. Hunt, Hub Group, and the like. The rail-owned fleets cater to non-asset carriers, while the private fleets are typically operated by integrated intermodal carriers.

It is not that unusual for growth rates for the two sectors to diverge. Since 2001, there have been periods during which growth in shipments via private containers outpaced rail-owned units, and vice versa, so it may be premature to jump to conclusions based on their performance last year.

One conclusion that can be drawn from this trend, however, is that the performance of the rail-owned fleet has been more volatile than that of the private fleet; the highs have been higher and the lows have been lower. This may reflect the equipment investment or marketing strategies of the railroad providers or the performance of their retailers.

Examining recent performance in more detail, rail growth fell behind that of the private fleet at the beginning of 2017 and has lagged ever since. In fact, the performance gap has been widening over most of the period, but it’s not entirely clear what’s causing them to pull farther apart.

One possible culprit is fleet capacity, but the data say otherwise. According to Jason Hilsenbeck, president of Loadmatch.com and Drayage.com, the US rail-owned domestic container fleet grew 6.9 percent last year, only slightly behind the 8.7 percent expansion seen in the private fleet.

Alternatively, all three of the big rail providers of domestic containers — CSX, NS, and UP — have been adjusting their networks and trimming their route structure during this time frame. Could we be seeing the cumulative market effects of their walking away from multiple “low-volume” secondary routes? Perhaps, but it also could be a productivity issue, with the velocity of the rail-owned fleet lagging and the vital interchange process between the railroads bogging down. Still another potential cause could be lower demand due to pricing decisions on the part of the railroads and the effect on their asset-light intermodal marketing company retailers.

There are too many moving parts right now in the intermodal picture to be able to determine which and how many of these factors are moving the needle. But it is safe to say that if this growth differential continues, much less widens, it will have major implications for the future of non-asset intermodal retailers, as well as the intermodal share of each railroad, depending on which equipment and retail strategy it employs.