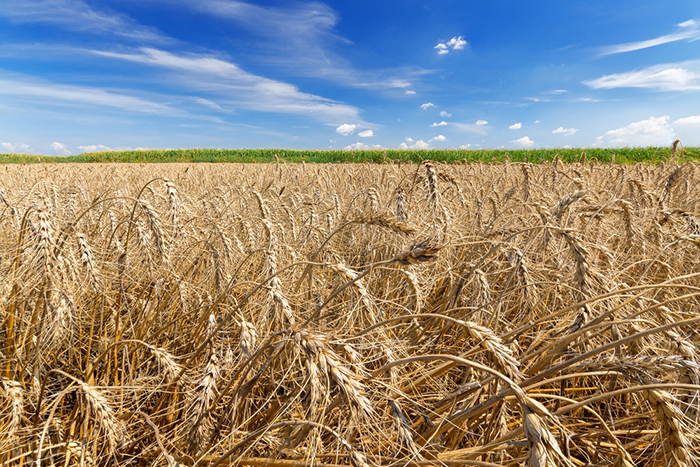 Wheat production is expected to rise 13 percent year-over-year in 2016 as other crops are also expected to come in above 2015 levels.

U.S. exporters are bracing for what could be another historic harvest this year, providing Western railroads with more intermodal cargo and container lines backhaul freight to Asia.

Unlike in years past, however, the North American intermodal network is primed to accommodate that load and healthy competition from markets overseas should relieve pressure on intermodal equipment demands.

Exporters can expect equipment to be tight in the typical places — Kansas City and Minneapolis — and congestion to mount in the usual locales — the Pacific Northwest and Vancouver. Nevertheless, industry insiders told JOC.com the 2016 harvest season should run smoother than in previous years.

“Everything’s really pointing to a really strong, and very likely historic, harvest,” said Mike Steenhoek, executive director of the Soy Transportation Coalition. “Certainly there’s going to be a lot of volume that will have to be accommodated by our nation’s transportation system. Fortunately, those various modes, at least rail and barge, have the capacity to accommodate it.”

It looks to be a productive harvest season in North America for a number of crops, from soybeans and wheat to distillers grains, or DDGs, and pulses, or legume grain seeds.

It looks as though 2016 will be the third such bumper crop for grain in three years.

That could spark worry for some who remember 2013 and 2014, when many farmers reported delays of weeks — if not months — to get crops shipped via rail to seaports. Because of a lack of rail equipment, farmers headed to the secondary markets: non-railroad suppliers, such as lessors, to secure hopper cars, adding in some cases thousands of dollars per unit onto existing tariffs.

“The 2013 crop was the one that was the challenge,” Steenhoek recounted. “But railroads responded to the shortage of rail supply. They responded vigorously. There was some new track, new personnel, new locomotive power added in the past few years that wasn’t there before.”

Railroads over the past three years have been investing considerably in their networks — entirely unreleated to bumper crops, though. Coal three years ago was still a hot commodity and the entrance of Big Oil in places such as North Dakota has required new investment in rail transport.

BNSF Railway alone spent $15 billion upgrading its tracks, sidings and loading facilities the past three years across its 33,000 miles of track covering the western United States.

As oil and coal prices have slackened though, there has been less demand for energy products, and those investments are now paying off for other corners of the market, like grain. Moreover, the decline in energy shipments has also been a windfall, providing more trains and track for hauling agricultural products.

And railroads have also learned valuable lessons from prior years, too.

According to Canadian Pacific Railway, the rail supply chain has “returned to normal” since the extraordinary crop and winters of 2013 and 2014.

Grain is CP's largest line of business and, like its primary competitor Canadian National Railway, CP is required by Ottawa to move a minimum amount of Canadian grain weekly until November or face stiff fines.

CP has said it is well-positioned and ready to move this year's western Canadian grain crop to market.

"We have been preparing for this crop year for months and we are ready,” CP CEO E. Hunter Harrison said in a statement.

Harrison, however, said that in order for the system to move the forecast record volumes of grain, it is essential that port terminals such as Canada’s Vancouver operate on a 24/7 basis, remain fluid and that seaways be utilized to take pressure off terminal facilities.

But Harrison’s warning may be too little too late, according to Jeff Mailhiot, director of TSC Container Freight, a non-vessel operating common carrier and freight forwarder based in Illinois.

But congestion at those Western ports is fairly typical during the peak of the harvest season. Just as tight equipment supplies are fairly typical in places such as Kansas City and Minneapolis this time of year.

Grain loads may help carriers reduce empty backhauls to Pacific ports and Asian markets, but in Kansas City and Minneapolis, unlike Chicago, there is a fixed number of inbounds headed for those destinations, limiting the supply of empty containers for grain exporters there.

“The one thing that’s really important for the carriers to know, that the shippers don’t understand, is Chicago has almost all the equipment you can get,” explained Ed Zaninelli, a former shipping executive, now president of Griffin Creek Consulting. “Kansas City has a fixed number of imports. To move empties to Kansas City from some place is going to cost you $500 to $600. Places like Kansas City, Minneapolis, will have to live off the inbound that they have.”

Not only is it a be a bumper crop, but high demand from Asian consumers is underpinning the market.

“It’s all relative to the buyer’s appetite and the buyer's appetite in India, which is the largest market, is strong right now,” said Mailhiot.

How much pressure is put on the North American grain market is partly dependent on how well competing markets perform.

“The more important thing is what’s happening to the other crops around the world. There are rumors that the South American crop didn’t do well and China’s crop has some problems,” said Zaninelli.

A poor South American harvest, which comes in the spring, means higher demand for North American grains by fall. But North America is not the only region with a late-in-the-year harvest season.

Black Sea states as well as the Commonwealth of Independent States, which includes Russia and a league of former Soviet states in eastern Europe, is reporting a bumper crop of its own, which should dull demand on North American grain some.

Russia, on its own, is now facing a lack of grain storage as it remains on track to produce the largest cereals crop in post-Soviet history, according to the head of Russia's Grain Union, a non-government farmers' lobby group.

Arkady Zlochevsky, the head of the union, told a briefing in Moscow earlier this month he expects a grain crop in the range of 5.2-5.4 billion bushels, including 3.2 billion bushels of wheat.

“That crop comes in about the same time as ours, that’s the most competitive crop that competes with our stuff,” said Zaninelli. And it stands to drag down the price of grain, but also provide some relief for what, in the past, has been an overtaxed North American agricultural supply chain.