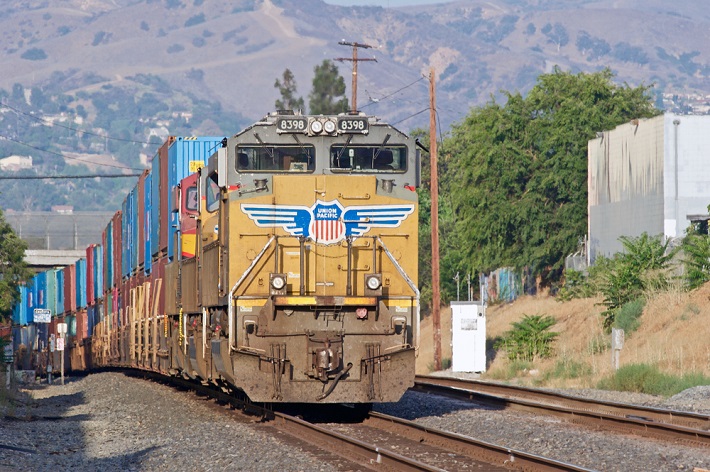 There is already evidence that tariffs have hurt intermodal volume. Photo credit: Shutterstock.com.

US intermodal volume is set to grow for the third straight year but at a slower rate than 2018, thanks to international and domestic pressures.

Tariffs on Chinese goods threaten the consumer confidence that drives the railing of containerized imports and US manufacturing. Trucking will also compete for domestic freight as spot market capacity is more abundant than it was a year ago, pressuring Class I railroad operators and intermodal market companies to be more competitive with price and service.

Intermodal volume expanded 5.3 percent in 2017 but slowed to 4.8 percent last year, according to the Association of American Railroads (AAR). Industry analysts with Stephens Inc. forecast 4.5 percent growth in 2019, but estimates are contingent on a trade deal with China rather than an escalation of $200 billion in US tariffs to 25 percent from 10 percent, which is set to take effect in March. International loads represent about 56 percent of total US intermodal volume, according to TTX Co. and the Intermodal Association of North America (IANA).

Tariffs are a transportation headwind

There is already evidence that tariffs have driven down volume. Despite the ports of Los Angeles and Long Beach handling more than 16 million TEU last year, outbound international moves to Chicago dropped nearly 20 percent between July and November. Los Angeles-to-Chicago container traffic represents up to 10 percent of overall volume, according to IANA.

Eric Starks, CEO of FTR Intelligence, argues that shippers built up inventories in reaction to tariffs.

“This is not a significant positive on the transportation market, or manufacturing, as we move into the first half of this year. We need to monitor how this translates into inventory-to-sales ratios,” he said on a Jan. 10 webinar.

Historical data show when the inventory-to-sales ratio climbs, demand for transportation recedes — as in 2009 and 2016.

Walter Kemmsies, chief strategist of ports, airports, and global infrastructure with Jones Lang LaSalle, believes a trade war would translate into an intermodal recession in 2019, but he considers this outcome unlikely.

Mark McKendry, vice president of intermodal for NFI Industries, explains how global trade disruptions trickles down to domestic transportation too.

“If high tariffs are applied to Chinese goods, consumption will be reduced; further, domestic output would diminish because of the increased cost of raw materials ...[However] the likelihood of a full-blown trade war with China is quite low,” he said in a Jan. 8 blog post.

Railroads don’t have much power to influence international business. They cannot control global trade, alter US trade policy, or rip up multiyear contracts with ocean carriers. But they can control aspects of domestic intermodal, about 44 percent of volume.

They decide where to offer service, the number of trains, and price per container. They also make decisions that impact train speeds and dwell times. Shippers also typically operate on contracts negotiated every 12 months.

Railroads face more competition on domestic freight than international. A 40-foot container is unlikely to be drayed 2,000 miles from Los Angeles to Chicago because most drivers wouldn't accept such a job. But everyday freight is placed on 53-foot trailers through the truckload spot market. This forces railroads to provide a competitive product to customers, particularly now when truck capacity is easier to book than a year ago.

Shippers choose domestic intermodal if service is consistent and it’s cheaper than a truck. But speeds and dwells were below the five-year average in 2018, decreasing 4 percent and increasing 3.2 percent year over year, respectively.

Average speeds dropped two miles per hour across all commodities between 2016 and 2018. Stephens Inc. estimates this translates into a need for 100,000 railcars per year because equipment turnover is slow.

Mark Rourke, president of trucking company Schneider, said on an April 2018 earnings call that it was unable to satisfy up to 6,000 orders because of intermodal service troubles.

“[Railroads] absolutely do not want the inefficiencies of 2018 to hinder growth in 2019. Most are optimistic that the capital committed in 2018 will allow them to acquire more share of market, moving forward,” McKendry said.

Some believe precision scheduled railroading (PSR) is an elixir to underperformance. PSR emphasizes an efficient use of assets by running fewer but longer trains. Low-margin lanes are eliminated, excess equipment is scrapped, and other assets are redeployed to stronger markets.

CSX Transportation, which uses PSR, increased speeds and reduced dwell times in 2018. It was the only Class I railroad to do both, according to AAR. But Canadian National Railway, which also uses PSR, reported a 12 percent decline in speed and 14 percent increase in dwell times, which some blame on trimming too much.

The bar on year-over-year comparisons will be low in 2019, so five-year averages on speed and dwell times will also be an important benchmark.

One year ago, intermodal shippers saved more than 15 percent as truck prices soared in reaction to the electronic logging device mandate. Now it’s less than 5 percent, according to a JOC.com analysis of 45 intermodal lanes.

“We do expect to see adjustments that exceed [the] consumer price index [CPI] by a few percent,” McKendry said. “Another unknown is to what degree increased truck capacity will limit intermodal price expansion.”

A Cowen & Co. survey found shippers expect rates to climb 3.4 percent in 2019, likely much closer to the climb in truckload rates than in 2018. During strong economic periods, the Cowen survey indicates contract rail rates tend to rise nrstly 5 percent. During weaker freight markets, rates grow between 2 percent and 2.9 percent. Rail rates almost never decline year over year. Since 2009, the CPI has risen on average about 1.8 percent.

“There is a lot of upward pressure on rates to maintain these ratios. So the industry is going to be faced with a choice between pricing and volume,” Gross said. “Railroads cannot raise intermodal rates faster than trucks because there will be a volume consequence.”

Canada Trade and Shipping Outlook
TPM22: What We Learned — Container Shipping in the Crosshairs
Managing E-Commerce From Order to Delivery and Beyond
END_OF_DOCUMENT_TOKEN_TO_BE_REPLACED