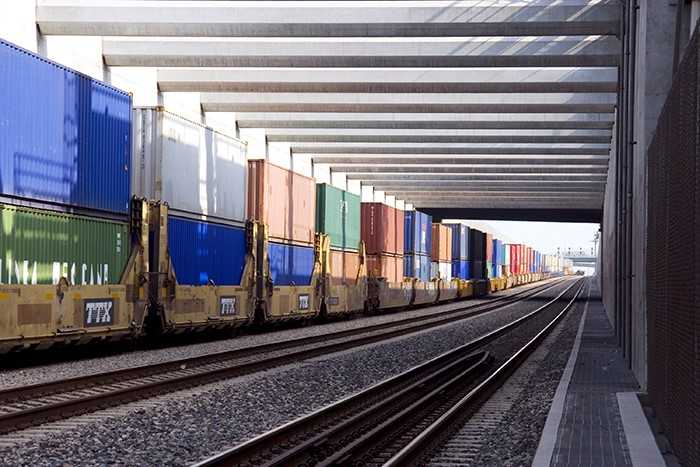 Although the 2018 imports and intermodal shipments were inflated somewhat due to the tariffs, the 10-year trend has been increased transloading of imports to domestic containers in Southern California. Photo credit: Alameda Corridor Transportation Authority.

The upward trend in Los Angeles-Long Beach toward transloading of containerized imports into domestic containers for shipment inland spiked 5.3 percentage points last year owing to the front-loading of spring merchandise caused by the US-China trade war.

“It was primarily the tariffs,” said John Doherty, CEO of the Alameda Corridor Transportation Authority (ACTA). The transloading of imports from marine containers to 53-foot domestic containers for intermodal transport to the eastern half of the country reached a record 3,002,000 TEU in 2018. Transloaded shipments as a percentage of all containers that left Southern California by rail was a record 52.2 percent, according to ACTA numbers.

Total intermodal traffic, including intact containers moving inland, was up last year because retailers and manufacturers shipped more merchandise or components in November and December when they were concerned that 25 percent tariffs on more than $200 billion of a number of imports from China would take effect on Jan. 1. The tariffs were initially delayed until March 1 and were delayed once again as US and Chinese negotiators continue to seek a trade agreement.

“They were just trying to get everything in before the tariffs,” Doherty said. The total number of containers leaving Southern California by rail was 5,748,000, an increase of 3 percent from 2017. Total imports through the largest US port complex in 2018 were 8.97 million, up 4.5 percent year over year.

Although the 2018 imports and intermodal shipments were inflated somewhat due to the tariffs, the 10-year trend has been increased transloading of imports to domestic containers in Southern California. The commensurate decline in the intact shipment of marine containers from on-dock and near-dock rail facilities to the eastern half of the country has been under way since 2006, according to ACTA statistics. Transloading percentage of total rail movements from Southern California increased from 32 percent in 2006 to 52.2 percent last year.

Higher-value, time-sensitive imports are the main driver of transloading because retailers and manufacturers save 10 days or longer in transit time to interior destinations, thereby reducing inventory carrying costs or servicing just-in-time manufacturing operations. Rob Leachman, professor at the Institute of Transportation Studies at the University of California, Berkeley, told the 2017 JOC Trans-Pacific Maritime Conference in Long Beach that 63.9 percent of electronics imports and 57.8 percent of auto parts enter the US through Los Angeles-Long Beach. By contrast, the port complex handles only 47.4 percent of lower-cost consumer goods such as furniture, he said.

On the other hand, the relentless 13-year growth in transloading as a percentage of total rail cargo may be slowing as the trend matures, said Lawrence Gross, president and founder of Gross Transportation. Shippers of higher-value merchandise have built transloading into their logistics plan. “It’s less opportunistic and more core,” he said.