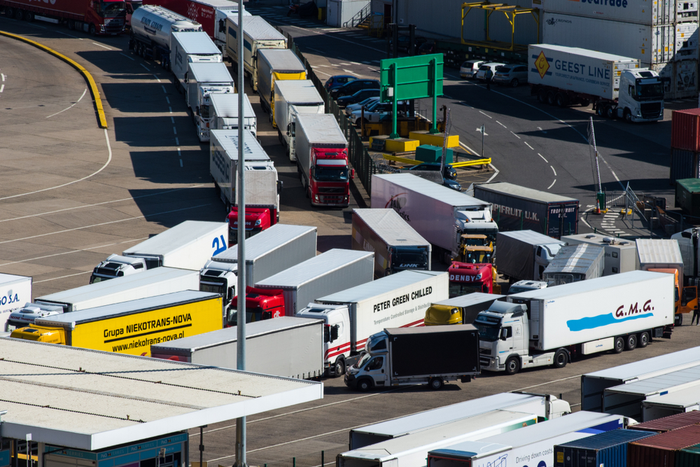 An estimated 14,000 trucks cross the UK-EU border every day, with the port of Dover (above) handling 17 percent of the UK’s total trade in goods. Photo credit: Shutterstock.com.

European multimodal carrier Samskip is expecting UK exporters and importers to begin switching from trailer transport to containerization soon, repeating a trend established in the run-up to the original March 29 deadline for Britain to leave the European Union.

Such a shift would move huge volumes of cargo from the road to the ocean, but Samskip believes the experience it gained in the build up to the March EU leaving date left it fully prepared and enabled the operator to refine its multimodal options ahead of the final Oct. 31 Brexit deadline.

“We saw a significant push in container volumes up to March 2019, especially into Hull [a northern England port], as decision-makers facing uncertainty opted for the reliability and proven procedures of container shipping,” said David Besseling, Samskip’s UK trade manager.

The multimodal carrier added new services between Hull and the Dutch port of Ghent, and Hull and Amsterdam in late 2018. They joined existing high-frequency connections between Rotterdam, Tilbury, Hull, and Grangemouth.

Samskip CEO Diederick Blom said container transport proved to be a reliable and efficient alternative to the accompanied and unaccompanied trucks in the period leading up to the original Brexit date.

“It [container shipping] could handle far more freight without the risk of terminal gate tailbacks, customs red tape, driver shortages or industrial action,” he said in a statement.

The vast majority of these trucks travel through the Calais-Dover trade corridor, a key pain point identified in the UK-Europe supply chain. The route handles 75 percent of all roll-on, roll-off (ro-ro) freight arriving by ferry from Europe every year, or more than 4 million accompanied trucking units. An estimated 14,000 trucks cross the UK-EU border every day, with the port of Dover handling 17 percent of the UK’s total trade in goods.

Blom said all indications were that the UK would leave the EU with no deal, an outcome widely regarded by all parties in the cargo supply chain as a worst-case scenario.

A no-deal Brexit will see the UK exit both the single market that allows the free movement of people across borders, and the European customs union that allows the free movement of goods among the EU’s 27 member states. Should the UK leave the customs union, all goods traveling between Europe and the UK will require customs declaration and inspection.

Shippers and forwarders on both sides of the English Channel warn such a change would create massive delays at the busy ferry ports of Calais in France and Dover in the UK. The EU is the UK’s largest trading partner, accounting for 44 percent of its exports and 53 percent of imports.