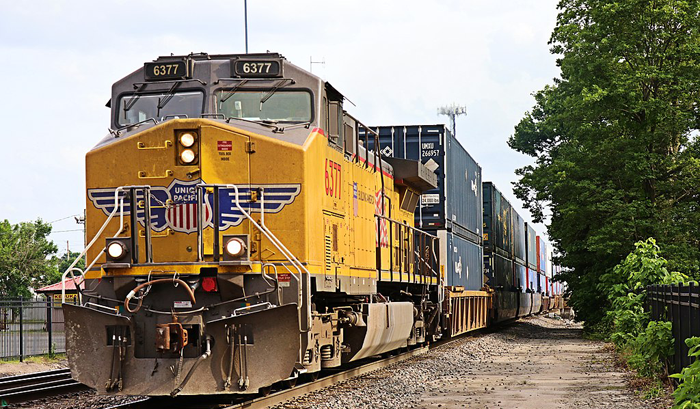 Union Pacific reported the lowest third quarter intermodal rail volume since 2016, along with train speeds slower than a year ago and lackluster reviews from a Cowen and Co. rail shipper survey. Photo credit: Tyler Silvest/Wikicommons.

Third-quarter intermodal volumes saw their sharpest decline in three years as the market shows no signs of bottoming despite the arrival of peak season.

Although a number of Class I railroads and intermodal marketing companies declared this summer that a bottom was near, intermodal traffic dropped 4.6 percent in the third quarter, the steepest decline for the July-September period since 2016.

“Volume has really been stagnant over the last three months,” said Ron MacDonald, senior vice president of Cornerstone Systems, an intermodal marketing company. “We haven't really seen any major changes. The imports did not come in and that has a big variance on the volume because of the transloading.

“So overall, it’s like we’re in July and stuck in July,” he added. July is considered part of the offseason in intermodal.

The Class I railroads moved nearly 4.8 million containers and trailers in the third quarter, down from 5 million in the year-ago period, according to the Association of American Railroads (AAR). Every United States railroad finished the summer with less volume than a year ago for the second consecutive quarter. Intermodal volume fell 3.6 percent in the first nine months of 2019 versus a year ago, according to AAR.

Domestic intermodal business has led the poor market in 2019. Through August, domestic intermodal volumes had dropped 6.3 percent while international container business had risen 0.3 percent, according to the Intermodal Association of North America (IANA). The rolling three-month average, however, is much worse for all types of containers. IANA said domestic volume was down 8.1 percent and international volume 1.9 percent lower between June and August on a year-over-year basis.

Union Pacific Railroad suffered a particularly sharp decline in the third quarter. The Class I railroad handled 912,852 containers and trailers, down 11.6 percent from 2018 and 3.4 percent lower than 2017. UP has issued a $200 surcharge on aggregate rates, which small shippers use as an annual rate. UP hasn’t imposed a peak season surcharge on large shippers this year. In comparison, UP applied a $1,250 peak season surcharge on excess freight out of Southern California in July 2018.

The use of rail-owned 53-foot containers declined nearly 13 percent through August on both a year-to-date and quarter-to-date basis compared with last year.

“We don't have any problems in getting equipment with any railroad. Every now and then we might have to wait one day. But even at all ramps it’s been fluid,” MacDonald said. “The chassis supply seems to be adequate for the volume that’s now moving.”

Justin Long, an industry analyst with Stephens Inc., said there are a number of reasons why intermodal volumes have fallen so much in the previous two quarters.

“We believe this is attributable to a combination of 1) softer demand environment, 2) the impact from tariff-related uncertainty and 3) readily available capacity in the truckload market,” he said in an investors note. “Peak season does not seem to have materialized to a significant degree.”

Service is the biggest concern of intermodal shippers, according to many surveys. So, is service getting better? Depends on who you ask.

The AAR data shows average intermodal train speeds are 25.7 miles per hour, a 3.1 percent improvement versus a year ago. Nevertheless, it’s slower than the 2017 average of 26.3 miles per hour.

Dwell times for all railroad equipment, which includes railcars, containers, and hopper cars, has declined nearly 12 percent. Lower dwell times are good for shippers because it means their cargo is moving faster.

A Cowen and Co. rail shipper survey, however, shows the average “positive” service rating in the third quarter fell to 56 percent from 62 percent in the second quarter. Shippers gave all Class I railroads lower grades compared with the second quarter and the prior year.

Service to intermodal marketing companies (IMCs), however, is measured by more than speed, dwells, and surveys. IMCs also consider how quickly a railroad takes to unload a train and make containers available to be collected. With precision scheduled railroads pursuing longer train sets, IMCs have complained that estimated times of container availability are inconsistent and undependable.

There is little good news for railroads in the latest numbers. Shippers remain concerned about service despite the positive metrics, but there are no signs that faster speeds and lower dwell times will be bringing volume back to the rails anytime soon.