Pressure on US domestic intermodal to up its game

Pressure on US domestic intermodal to up its game 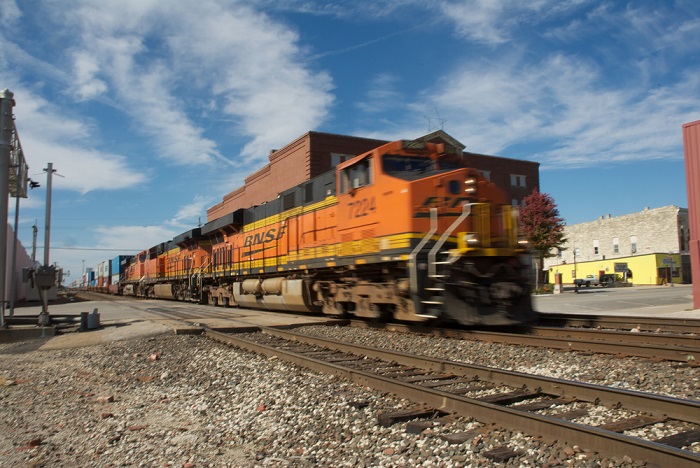 If price is how intermodal separates itself from trucking, railroads should think hard about rates. Photo credit: Shutterstock.com.

In 2018, domestic US shippers turned to intermodal because capacity was so difficult to find in trucking, but this year railroads will need to offer more competitive rates and better service to keep customers on board.

In 2019, the truck market has loosened and all-time record rates on the spot market have receded to levels in October 2017. The desperate shippers in February 2018 are no longer desperate, so there must be a new reason to use intermodal.

“It’s pretty clear 2019 is going to be a much more competitive year than 2018 was in terms of truck versus rail. Competitive conditions will be much more challenging for intermodal,” said Larry Gross, intermodal analyst with Gross Transportation Consulting. “Simply having an empty box was sufficient last spring. It will not be sufficient in 2019.”

If price is how intermodal separates itself from trucking, railroads should think hard about rates. According to a JOC analysis of 45 origin-and-destination pairs, intermodal is saving shippers much less than a year ago. In some cases, intermodal offers less than a 5 percent discount, and in other situations truck prices are cheaper. On some lanes, such as Houston to Chicago, intermodal will never be competitive. In other second-tier lanes, such as Charlotte to Chicago, a poorly priced rail quote will drive shippers to truckload.

Much of the intermodal volume growth occurred in the first half when truck rates were higher and capacity was difficult to locate. Shippers flooded to intermodal because a train was better than idle freight. Trains were slower than usual, dwells were longer, and service was poor, but there were not alternatives. Today shippers have choices.

Despite record annual volume, intermodal growth rates slowed from 5.3 percent to 4.8 percent last year, according to the Association of American Railroads (AAR). Intermodal volume grew 5.4 percent through June 30 but only 4.2 percent between July 1 and Dec. 31. The number of 53-foot containers on rail was up 5.3 percent through November, according to Intermodal Association of North America (IANA). Like the AAR data, IANA’s information cannot separate international from domestic business because of transloading — the transfer of cargo from international boxes into larger 53-foot containers.

Nevertheless, US domestic truckload was a factor in the intermodal story.

Spot market rates surged more than 30 percent by June 2018, according to DAT Solutions and Truckstop.com. By Dec. 31, truckload rates and demand metrics turned negative year over year. Expect the cooling to linger this year, according to industry economists and analysts.

This will increase the pressure on the intermodal marketing companies (IMCs), a group of brokers that sell transportation to shippers on behalf of Class I railroads.

If having space isn’t enough, then railroads must provide other incentives. The two main levers are lower prices and improved service. The latter will be necessary because every Class I railroad — except CSX Transportation — reported slower intermodal train speeds and longer dwells in 2018. Norfolk Southern Railway and Canadian National Railway saw conditions in both metrics deteriorate by double digits last year.

If the railroads improve service and offer competitive rates, transportation managers could save money this year as CEOs and chief financial officers (CFOs) ratchet up pressure to remain on budget. In a growing number of lanes, however, intermodal costs more than truck. It’s an issue that developed this summer and persists to this day.

According to a JOC analysis of 45 freight lanes, spot intermodal was saving an average shipper about 15 percent versus truckload in January 2018. Now the average is less than 5 percent. Out of the 45, rates are equal or cheaper via truckload on 18 lanes. The analysis compares intermodal rates, via Intek Freight and Logistics, with truckload linehaul plus a retail markup.

An example of the intense competition is in one of the busiest corridors — Los Angeles to Chicago.

Twelve months ago, spot rates topped out at $1.60 per mile on intermodal versus $1.90 on truckload. By December, intermodal rates climbed above $2 while truckload remained at or below $2. Intermodal contract rates were about $1.60 in 2018, based on conversations with IMCs.

From Atlanta to Dallas, spot rates were $1.90 per mile on intermodal versus $2.10 on a truck a year ago. Now intermodal costs as much as $2.20 while truckload remains the same.

Neither lane is at risk of losing volume, though, since both are massive freight markets. Rick LaGore, CEO of Intek, explains that high-volume shippers negotiate very competitive contract rates in these lanes.

These larger shippers will keep their intermodal footprint because they view transportation strategically, LaGore explains. Transactional shippers will be shopping in 2019.

“Big shippers know conditions are cyclical. If it’s a small or medium-sized shipper, they’ll pit truck versus intermodal rates all day long. But big shippers with high volumes spread their eggs in a bunch of baskets,” LaGore said. “Do the big guys care about price? Absolutely. Do they [care] as much as the smaller guys? Not really.”

Justin Long, analyst with Stephens Inc., doesn’t believe there should be any concerns.

“Rail pricing is a lot more stable relative to truckload and has a history of continuing to increase in the low-single digits even in recessionary periods (due to consolidation in the sector). Second, if freight growth slows, we think a more fluid rail network could expedite the rate of truck-to-rail conversions,” he wrote in an investors note.

On some lanes, intermodal will never be competitive. Some examples are Laredo to Chicago, Houston to Chicago, or Denver to Los Angeles. The IMCs have long struggled to sell these lanes, and Norfolk Southern Railway and Union Pacific Railroad are eliminating domestic services in these markets this winter.

Precision scheduled railroading (PSR), which is now being implemented by UP and NS, views uncompetitive lanes as expendable. UP’s hire of Jim Vena, who worked with PSR pioneer E. Hunter Harrison, as chief operating officer is further evidence this operating model is here to stay.

To a PSR operator, if a service doesn’t generate enough operating income, then it should be shut down and resources redeployed to more lucrative markets.

Some examples are Chicago to Atlanta, and Linden, New Jersey, to Los Angeles, routes in which intermodal offered a discount even through December 2018. Even the L.A.-to-Chicago and Atlanta-to-Dallas lanes have so much freight to warrant extra resources.

But how will railroads approach in-between lanes? Chicago to Houston; Charlotte, North Carolina, to Chicago; or Seattle to Los Angeles.

Shippers could save up to 20 percent a year ago, based on a JOC analysis, but now intermodal rates are on par with or more expensive than truckload.

Will PSRs price such lanes with an eye towards truckload, or be laser-focused on operating ratios without prioritizing cost savings?

“If railroads are not offering a reasonable discount versus truck, the freight won’t move on intermodal. Intermodal doesn’t set pricing; intermodal has to follow truck pricing,” Gross said.

If prices are set to achieve a PSR-fueled operating ratio, IMCs will have a hard time selling these lanes to shippers.

“It’s going to go truck,” said LaGore, when asked about these lanes. “We probably won’t have a lot of volume in these lanes. The folks who win the business will be those [asset-owning intermodal companies] like J.B. Hunt Transportation Services.”

The landscape should become clearer in the next couple months. Savvy intermodal shippers will investigate contract rates in late January and February and will quickly make 2019 commitments.

Shippers will continue to use intermodal and expect volume to rise once again overall in 2019, according to analysts, but how much is tendered to railroads will ultimately come down to these decisions on price and service.