Intermodal volume has been on a steady decline since mid-February due to COVID-19, an aberration in normal seasonal trends based on the five-year average. Photo credit: Ari Ashe/JOC.com.

North American intermodal rail volumes last week fell to the lowest point in nearly a decade, underscoring the dramatic fall-off in containerized imports and slowing growth in the shipment of trailers and domestic containers. 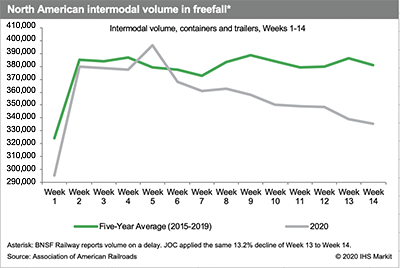 Intermodal volume declined 15 percent year over year to 339,125 containers and trailers in the week ending March 27 (Week 13), the worst final week of a first quarter since 2013, according to a JOC.com analysis of data from the Association of American Railroads and BNSF Railway. Although BNSF's intermodal data is not yet available for the week ending April 3 (Week 14), last week's volume will be the weakest in North America since 2013 in a best-case scenario and lowest since the Great Recession of 2008–09 in a worst-case scenario.

The decline in volumes is contributing to a deep financial hit to Class I railroads, which Amit Mehotra, rail industry analyst with Deutsche Bank, reckons will cost the industry some $9 billion in revenue, including intermodal and railcar business, and $4.7 billion in profits this year. He estimates volume across all commodity groups will drop 14 percent year over year in 2020 “roughly consistent with broad-based volume declines endured during the financial crisis in 2009, and significantly worse than declines observed between 2014 and 2016 [the last freight recesion].”

With US imports from Asia in March down to the lowest level in seven years and US truckload rates falling to February levels, reflecting slowing demand, there’s little hope among analysts and intermodal marketing companies (IMCs) of a short-term rebound.

“The unprecedented shut down of businesses is going to last through this month and probably longer. Then when it is lifted, I think it's going to be a struggle for intermodal business to come back, not a V-shaped snapback. People are out of work, we won’t be able to turn that switch back on in a heartbeat,” said Larry Gross, an intermodal analyst and JOC contributor.

Intermodal executives with an optimistic view believe a sharp recovery will occur and that companies struggling to navigate a recession will cut transportation budgets to compensate for lower sales, giving a potential advantage to intermodal as a cheaper alternative to trucks.

“If [people] return back to work after April 30, that means shipping is going to increase drastically and capacity is going to shrink, and you're going to probably see that within a 30-day window,” said Robb Johnson, a California-based agent of IMC Mode Transportation.

Instead of quickly getting essential goods to shelves, he said saving money in an economic recession could be the chief concern for shippers, although Johnson also acknowledged this would be in a best-case scenario.

“Shippers will be looking for a more economical price point to move their goods. Just getting it there right away and we didn't care what we paid was how shippers operated in the panic. However, now the economy is in trouble and you’re looking just to stay afloat,” he said.

Other intermodal providers, however, believe the current low-volume environment could persist through 2020.

Rick LaGore, CEO of InTek Freight and Logistics, an IMC, doesn’t believe railroads will be able to lower prices enough to capture freight, in part because diesel prices are so low, which makes trucking rates more competitive with intermodal. The US Energy and Information Administration reported the national average for diesel last week was $2.548 per gallon, down 54.5 cents compared with a year ago, and the lowest level since July 2017.

“I think a number of these stores are never going to reopen, so there aren’t many companies restocking right now. Those who are restocking are needing it quickly and using trucks,” he said.  “So I think we’re going to take it on the chin for a while but hopefully not be taken down to the mat.”