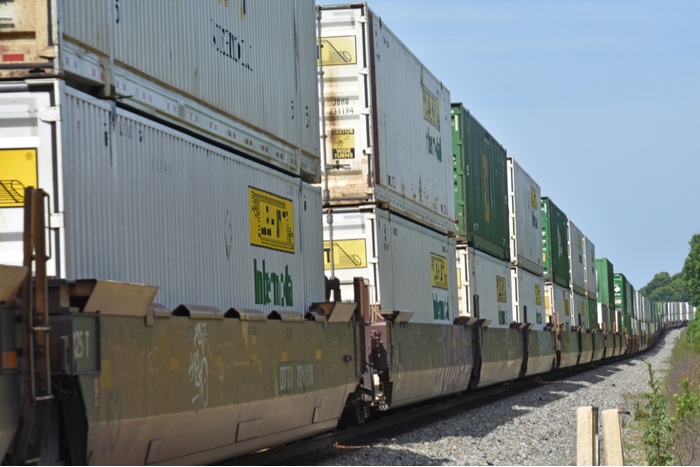 Domestic intermodal lose almost all its price savings in April after a huge swoon in truckload rates, and volume will likely remain depressed until truck rates aren't so cheap in markets where intermodal rail typically thrives. Photo credit: Shutterstock.com.

US intermodal rail savings in April fell to their lowest in more than a year, reversing what was a strong discount in the first quarter, according to JOC’s proprietary Intermodal Savings Index (ISI).

The initial snapshot of April’s intermodal pricing is the first reading of how the COVID-19 pandemic has impacted the value rail brings to a shipper when compared with over-the-road truckload.

The index measures how much money a shipper should expect to save on nearly 200 modally competitive lanes. There are two indexes: spot market and contract market. Index values are measured from a neutral base of 100, signifying truckload and intermodal rail rates are identical. Values over 100 indicate intermodal is cheaper, while values below 100 indicate trucking is cheaper. The higher the value, the more intermodal saves over trucking.

The first April reading, subject to adjustment, indicates a spot index value of 102.9, the weakest month since February 2019 and a stark reversal from 116.5 this past March. The April total was also far below the historical spot index average of 113.9.

All index values correspond to percentages, which means 102.9 equals a national average of 2.9 percent intermodal savings compared with long haul trucking, down from 16.5 percent savings in March and below the historic average of 13.9 percent savings.

Volume falls off a cliff

Not only were rates not as competitive as in the past, but neither was volume. The Intermodal Association of North America (IANA) reported last week that intermodal volume, both international and domestic, declined 6.7 percent year over year in the first quarter. Domestic intermodal alone was down 1.8 percent.

“The coronavirus is the obvious headwind going into Q2, on top of existing trade issues, and no market segment is immune,” IANA CEO Joni Casey said. “We don’t know how long volumes will remain where they are, and recovery will bring its own set of challenges.”

Intermodal volume has been down more than 10 percent every week since Week 9, the last week of February, according to the Association of American Railroads (AAR), posting some of the weakest numbers since the Great Recession of 2008-09, although that data doesn’t separate international and domestic business.

J.B. Hunt Transport Services, however, warned of a double-digit percentage decline in domestic intermodal in the second quarter.

Intermodal volume took a hit as the COVID-19 pandemic caused spot truck rates to plunge across the US. Several headhaul lanes, such as out of Los Angeles, became cheaper to move on a truck than a train, according to the index and a JOC.com analysis of data from digital broker Loadsmart. The national shipper spot retail rate in April was $1.67 per mile, according to Loadsmart, down from $1.90 in March. That was in line with the double-digit sequential decline in broker-to-driver wholesale rates measured by DAT Solutions, which reported its April dry van rates were the lowest since September 2016.

Loadsmart’s data of top US freight lanes is based on quotes of what they would charge a shipper, rather than actual transactions, but is highly correlated with DAT’s directional movements. Loadsmart’s early May data shows a further deterioration in rates from April, even though DAT Solutions reports demand has stabilized.

Knight-Swift Transportation CEO Dave Jackson told JOC.com that as long as truck drivers are willing to haul loads at unsustainable rates, intermodal will struggle to compete. Drivers last week protested in Washington, DC, about the low rates, which in some cases are less than $1 per mile, yet there are drivers willing to do it.

Jackson said those drivers are often just trying to survive another week, reasoning that any freight is better than no freight when a stack of bills are due.

Chad Boblett, a driver who runs a Facebook trucker group called “Rate Per Mile Masters” with more than 25,000 members, told JOC.com he has more than $5,000 in costs each month even if he doesn’t move his truck. That includes a monthly truck payment, truck insurance, health insurance, and other costs that don’t vanish if he sits at home.

The Contract Index didn’t move nearly as much, which is not unusual because contract markets tend to be less volatile than spot markets during a supply chain disruption. The April preliminary value was 118.2, only one index point lower than March’s reading. The contract intermodal market has been well below the historical average of 124.5 since the beginning of 2020. That’s because while contract truck rates fell 5.6 percent year over year in the first quarter on the indexed lanes, contract intermodal rates rose 1 percent.

Similar to the spot index, it’s unclear how contract intermodal savings will progress in the next few months. During recent earnings calls from CSX Transportation, Norfolk Southern Railway, and Union Pacific Railroad, railroads have indicated they won’t chase the spot market down by lowering rates on contracts.

Intermodal marketing companies (IMCs), which sell rail capacity to shippers, said in February that CSX was quite conciliatory on rates, but also told JOC.com that many of the bids were paused when businesses shut down in March. It’s unclear how the new economic reality that results from the pandemic might cause a reset in rates, according to IMCs.

The same uncertainty exists on truckload contract bids that were paused, so JOC’s Contract Index, which compares contract versus contract in the two modes, will measure the differences in the final results of those bids in the coming months.