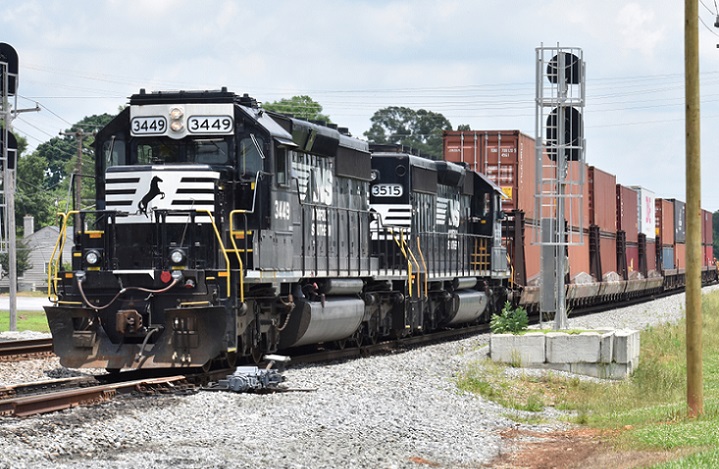 North American intermodal volume for the first quarter receded for the first time since 2016, while service for international and domestic containers leaving California deteriorated, a combination that means more delays and costs.

Weather was certainly a factor, as CSX Transportation and Norfolk Southern Railway performed better than in 2018 while Union Pacific Railroad and BNSF Railway struggled to keep trains running amid snowstorms, a polar vortex, and flooding. And despite strong January volume due to front-loaded cargo, truckload and intermodal drayage executives acknowledge February and March were very weak.

The combined headwinds of inclement weather and a pullback on shipments following heavy front loading at the end of last year caused volume to come in below industry expectations in the first quarter. The question is now whether the economy is strong enough to overcome these obstacles.

“If we have this conversation in six weeks and we haven’t seen the improvement in rail service, or there’s a significant degradation of the US economy, I will be more concerned. But because of the noise in the first quarter, I think it’s just a soft patch for the moment,” said Todd Tranausky, FTR’s vice president of rail and intermodal.

Total first-quarter intermodal volume dropped 1.3 percent from the same three-month period a year ago, according to the Association of American Railroads (AAR). Domestic volume will decline in the first quarter, while international business is poised to be flat or down slightly, according to FTR Associates. It all depends on whether a 6.5 percent rise in international volume in January was enough to offset a 2.4 decline in February and likely a poor March. What’s more, a decline in volume usually correlates to better service because of fewer opportunities for errors, but last quarter bucked this historical trend.

Intermodal train speeds were 12 percent slower in March than the 10-year average, with West Coast railroads showing the largest declines. BNSF’s trains were 3 percent slower on average even though volume dropped 5.3 percent, according to AAR. UP’s volume grew 3.7 percent thanks to new business from Ocean Network Express, but intermodal train speeds plunged 11 percent year over year.

On the East Coast, CSX’s volume fell 4.4 percent while NS gained 2.2 percent, likely the result of CSX eliminating services as part of its implementation of precision scheduled railroading (PSR). Both railroads reported faster train speeds than a year ago without any major weather disruptions. Whether this means PSR could also be the elixir for other railroads is unclear.

Snow, cold temperatures, and the flooding in the Midwest and Central Plains was clearly a factor for freight rail in the first quarter. Tracks buried under water are unusable, and unlike trucks, trains cannot easily detour from their given route. And even after flood waters recede, trains cannot immediately return to maximum speed. Railroads have to inspect and replace damaged ballasts, crossties, and track.

“There is a buildup from 10 miles per hour, then 20, and incrementally until maximum speed. It will take another four weeks probably to get the network back to where it was,” Tranausky said.

No forecasts or modeling of 2019 volume could have accounted for the unanticipated emergency.

According to a recent Cowen and Co. shipper survey, shippers would tender more freight to the railroads this year if service improves. The average positive rating of Class I service decreased sequentially from 64 percent to 49 percent in the first quarter, but if service was better, 82 percent of shippers indicated they would transfer up to 10 percent more freight to rail, the survey found.

This is ultimately the goal of NS, UP, and KCS in integrating elements of PSR into their networks: better service with fewer assets.

“As the three recent precision scheduled railroading [PSR] adopters continue reshaping their networks and assets, shippers may feel the disruptions in their service. That being said, in our view, PSR adoption [with NS, UP, and KCS] has not been as disruptive as at CSX, and we believe that winter was the more disruptive catalyst,” said Cowen analyst Jason Seidl.

Price is also a determining factor for shippers, as intermodal is viewed as slower but cheaper than truckload. But a JOC.com analysis of more than 100 lanes found BCOs save less than 5 percent on average using spot intermodal. A growing number of 800- to 1,200-mile spot market hauls are now cheaper on a truck, although 95 percent of intermodal business is done via contract.

Will the economy hold up?

There are signs the North American economy is also trending in the wrong direction. The Cass Freight Index, which measures both truck and rail shipments throughout North America, fell 1 percent in March, the fourth consecutive month of year-over-year declines.

“Yes, all of these still relatively small negative percentages are against extremely tough comparisons; yes, the two-year stacked increase was 10.8 percent for March; and yes, the Cass Shipments Index has gone negative before without being followed by a negative GDP [a recession],” said Donald Broughton, principal and managing partner at Broughton Capital and author of the Cass index report. “But at a minimum, business plans and economic outlooks should be moderated or have contingency plans included or expanded.”

Indexes from the Institute for Supply Management (ISM) and National Federation of Independent Business (NFIB) are also lower than a year ago but remain positive. The ISM’s purchasing managers’ index (PMI) dropped 6.7 percent in March, while the NFIB’s Small Business Optimism Index slid 2.1 percent year over year.

The Cowen survey found 52 percent of rail shippers were not as confident about the economy as they were three months ago. For the first three quarters of 2018, a majority (about 60 percent) expressed a growing confidence in the economy.

The next six weeks might determine whether this is merely a pause in economic expansion or the beginning of economic contraction, according to Broughton.

If service issues in the first quarter were truly all about the weather, then service should improve in the coming months, as should volume. But if trade wars flare, the economy falters, spot truck rates stay low, or PSR is pushed out too aggressively, 2019 might be worse than previously projected.