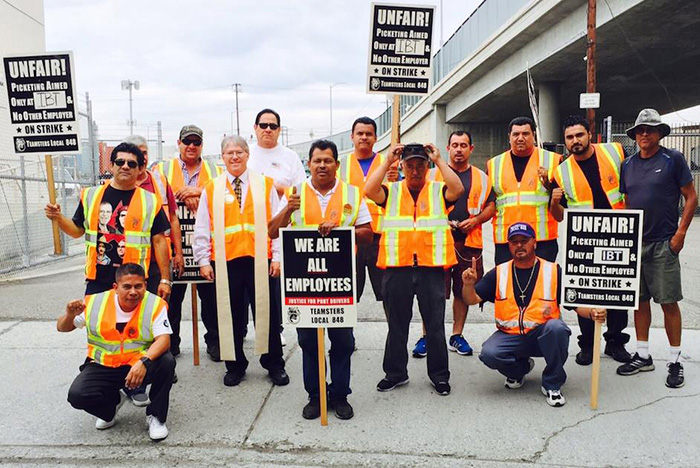 The recent decision by Hub Group to discontinue its employee-based drayage operation in Southern California is the latest event in a tug of war between the independent contractor model of trucking and the employee model that is likely to continue for some time to come and the result will impact costs for shippers.

Drayage companies nationwide, and especially in California, face increasing pressure from state and federal regulators to re-classify their owner-operator drivers as employees. So-called misclassification lawsuits, some filed by drivers on their own, some supported by the Teamsters union, have resulted in a handful of companies shifting to the employee model.

On the other side of this battle are the hundreds of drayage companies that strongly support the independent contractor model in which the drivers own the vehicles, or are involved in lease-purchase arrangements. This model has dominated harbor drayage and short-haul trucking since the industry was deregulated in 1980.

As these developments play out in the coming years, the message for cargo interests is that truck capacity and pricing of drayage services will be affected. Truck company owner and industry attorney Greg Stefflre said capacity shortages could develop in certain markets if drivers migrate to higher-paying sectors of trucking. No matter where the industry heads, the result will be an increase in drayage pricing.

“Everything begins and ends with what the trucking company is paid for its services. What’s the market?” he said. Stefflre brings a unique approach to the debate. As owner of Rail Delivery Services in Southern California, he understands the pricing pressures in the drayage industry. As a long-time practicing attorney, he has provided legal guidance to the American Trucking Associations and the California Trucking Association, and is knowledgeable about the complexities involved in misclassification litigation.

On the other side of the debate is Nick Weiner, Teamsters port campaign director. The Teamsters union is often involved in misclassification efforts and driver demonstrations at seaports because a company that shifts from the independent contractor to the employee model is subject to possible organizing by the union. Four drayage companies in Los Angeles-Long Beach in recent years have been organized by the Teamsters or are in negotiations with the union.

Weiner said he sees the Hub development as part of a larger scenario in which the hundreds of small, oftentimes marginally-funded drayage companies do business with powerful national retailers and powerful shipping lines and carrier alliances. The fragmented drayage industry has no leverage over either of those forces, and its fate is therefore to experience downward pressure on prices and driver earnings if the industry doesn’t change.

“How can 600 to 700 drayage companies (in Southern California) compete in this environment?” Weiner said. He answered his own question with one word, “consolidation.” The Teamsters view consolidation as large-scale mergers and acquisitions until a much smaller population of well-funded companies with employee drivers controls drayage in a region, ensuring sufficient capacity for shippers, good pay and benefits for drivers and profits for the trucking companies.

Hub, which did not return phone calls, could not compete in the Southern California market after less than two years under the employee model. Facing misclassification pressures in 2014, and sensing that the regulatory environment in California was against the independent-contract model, Hub shifted to employee drivers. However, by pricing its services aggressively to gain market share, Hub was not able to pay its drivers competitive wages, and what resulted was a “downward spiral” in which the company had no choice but to exit the market, Weiner said.

About 30 trucking companies in the region have shifted to the employee mode the past several years, and the Teamsters have organized four of them, with a total of about 500 drivers, Weiner said.

The employee-based model is decidedly more costly, Stefflre said. He cited a study by Southern California economist John Husing which concluded that with employee drivers, “the cost of labor would rise by a 2.08 factor while the work hours would decrease by 2.63 percent in order to comply with California labor laws.”

Marine terminals in Los Angeles-Long Beach are turning to creative approaches such as container dray-offs and free-flow of containers to decongest their docks in order to handle the mega-ships that are calling at the largest U.S. port complex. In these arrangements, the in-terminal times spent by drivers decrease significantly, and they can get seven to 10 turns a day, versus two or three when they mix with hundreds of other truckers at congested terminals.

In a free-flow environment, trucking companies get the productivity they require, and that allows them to pay employee drivers hourly wages with benefits, Weiner said. Furthermore, by controlling truck capacity and directing the employee drivers where to call, the companies can ensure their customers they will have sufficient capacity to handle the cargo surges, he said.

Conversations with local trucking executives indicate that a unionized driver in Los Angeles-Long Beach will earn about $20 to $22 an hour, with benefits of $21 to $23 an hour, for a total cost to the employer of $41 to $45 an hour.

Driver earnings shot up last year during the prolonged coastwide contract negotiations between the International Longshore and Warehouse Union and the Pacific Maritime Association. Due to labor slowdowns and retaliatory actions by employers, the ports went into gridlock, and truckers were idled outside the marine terminal gates for hours at a time.

Owner-operator drivers are paid by the trip, so downtime translated to reduced earnings. Long waits at the terminals also artificially reduced capacity in the harbor. As a result, cargo interests paid “congestion surcharges” to the the trucking companies to ensure capacity, and the companies passed the money on to the drivers to keep them working.

Stefflre sees danger lurking if the industry relies on the belief that congestion surcharges are here to stay. In the short term, drivers in non-harbor drayage work, such as serving the intermodal rail yards, or local warehouses, will naturally gravitate to the harbor if the earning potential is higher. Companies in non-harbor work will have to raise their rates in order to meet the harbor rates.

However, Stefflre noted, given the historic experience in the harbor, the surcharges could very well end, or at least be significantly reduced. “Thus a decision to base the profitability of an employee-driver operation on the current rates appears to be risky,” he said.

In short, tensions between the employee and independent-contractor models in drayage will continue. This is especially true in California due to the regulatory environment and spate of misclassification lawsuits. “That means that for the foreseeable future, we can find no respite from these attacks in California’s state and federal courts. At best, we will fight a rearguard action based on factual preponderance and effective lawyering,” Stefflre stated in a white paper on the subject.

Permalink Submitted by markrabens@idsg... on Feb 17, 2016 10:15PM EST
Sounds like another Teamster ad, really sorry to see so many picking sides and building verbal cases. They need to fix the terminals, and make it so drivers can get 3 to 4 round trips per day like they did in 2008 and 2009, and the beginning of 2010 before everyone decided that this class of worker didn't have the right to make a living wage, and that they somehow needed the Union to fight for them because they had no voice. . . .all sides can do better, but one always has the media playing them.

Yes, fix the root cause

Permalink Submitted by kgent@hubbell-l... on Feb 18, 2016 9:38AM EST
Yes, fix the root cause (terminal operations), do just assume that someone else can pay for the severe inefficiencies. DO THE RIGHT THING. Drivers deserve a fair wage, but simply ignoring the issue of the terminal operations and passing issue onto someone else is not the way to do it. Congratulations to the Southeast ports who have worked to build compelling operational models; there are many of us who are becoming bigger and bigger fans of your desire to build something that people want rather than the West Coast model of 'they have to use us, so let's pass on the issues to the customer'.