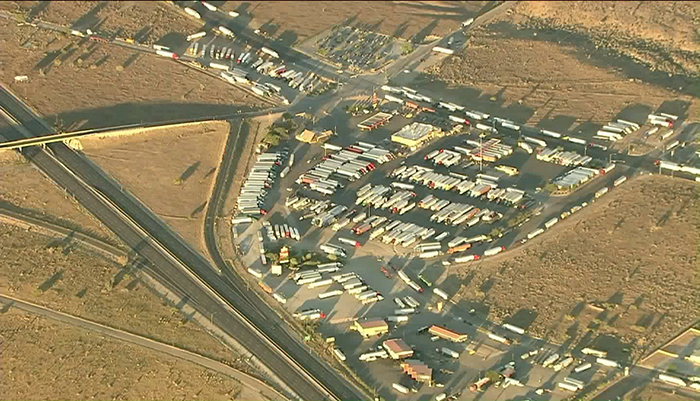 That means disruption, detours and delays for shippers moving goods through the region at the edge of the Inland Empire, a major transfer point for containerized trans-Pacific freight.

Interstate 15 is just one of several roads in San Bernardino County Caltrans said to have been shut down by the so-called Blue Cut fire, which started in the Cajon Pass near I-15 and swept through the area Tuesday.

(Visit the InciWeb incident information system for regular updates on the wildfire.)

BNSF Railway Tuesday reported “an operational impact” from track shutdowns in the Cajon area. That affects traffic to and from Southern California on-dock intermodal facilities.

“Customers may experience delays of 36 to 48 hours on shipments moving through this corridor,” the railroad said in a service advisory. It could not say when the tracks might reopen.

Union Pacific Railroad also shut down its track through the area. "Our focus is the safety of those affected by the fire and assisting the Forest Service and local fire departments in their response efforts," a company spokesperson said in an e-mail.

"We have begun rerouting trains around the fire," he said. "We do not currently have an estimate when normal operations will resume."

"Countless big rigs" were parked on either side of Cajon Pass Wednesday, according to The Sacramento Bee, waiting for I-15 to reopen. Alternative routes for truckers involve significant detours.

More than 80,000 people have been ordered to evacuate the region and 34,000 homes are threatened by the fire, which by Wednesday morning had spread more than 30,000 acres.

California Gov. Jerry Brown declared a state of emergency in San Bernardino County as the wildfire expanded rapidly Aug. 16. I-15 is closed between San Bernardino and Hesperia.

Truckers may have difficulty finding alternative routes in the area. Caltrans advised tractor-trailers not to use State Routes 138 and 18 through the San Bernardino Mountains.