All intermodal contracts booked up for Southern California 2018 peak

All intermodal contracts booked up for Southern California 2018 peak 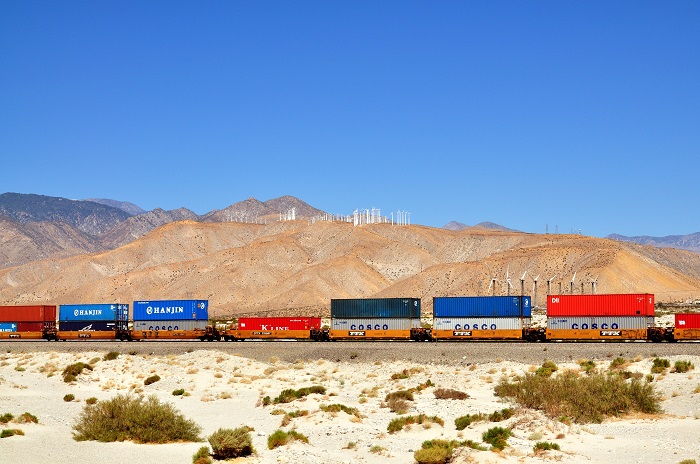 Union Pacific is no longer taking on new contracts for peak domestic intermodal business later this year out of Southern California, according to Intek Freight & Logistics. Small-size and mid-size shippers will likely be hurt the most because they don’t have the volume to gain leverage in negotiations. (Above: A freight train passes through Palm Springs, California.) Photo credit: Shutterstock.com.

Shippers waiting to decide whether to buy capacity to move a 53-foot container out of Southern California are out of luck with contractual business already locked up for the peak season on one rail line. For the stragglers, the only option is to pay huge spot market rates and absorb the hit on the bottom line.

For those suggesting rates have plateaued, think again.

Rick LaGore, CEO of Intek Freight & Logistics, said that Union Pacific Railroad is fully booked on contracts through the fourth-quarter peak season, leaving the spot market the only viable alternative for shippers to find capacity.

Some of the highest domestic intermodal spot rates are exiting Los Angeles, according to the JOC Shipping & Logistics Pricing Hub. For example, prices from Los Angeles to Atlanta have skyrocketed 128 percent over the prior year, according to Intek Freight & Logistics. For the week ending May 21, rates surged 116 percent from Los Angeles to Jacksonville, Florida, and soared 92 percent on the cross-country trip to Kearny, New Jersey. A week before, Los Angeles to Atlanta and to Kearny were up more than 115 percent on a year-over-year basis. Intermodal rail spot rates can be found on JOC.com's Shipping & Logistics Pricing Hub.

The declaration is the latest in what has been a tsunami of business in the transportation industry this year. Domestic intermodal business expanded 7.4 percent in the first quarter, according to the Intermodal Association of North America, as shippers unable to find truckload capacity turned to the rails. The four-week moving average on US intermodal is up 7.9 percent, according to the Association of American Railroads. The Cass Intermodal Price Index rose 6.6 percent year over year in April to 141.9, close to the all-time record of 143.2 established the month before, and the three-month moving average is up 5.9 percent.

"Tight truckload capacity and higher diesel prices are creating incremental demand and pricing power for domestic intermodal," said Donald Broughton, analyst and commentator for the Cass indexes. "Longer term, we continue to foresee oil trading in the $45 to $65 range [per barrel] and diesel in the $2.50 to $3.25 [per gallon] range throughout 2018 [without the refining interruption pressure produced by hurricanes or other catastrophic events]."

Robert Rich, CEO of Roar Logistics, an intermodal marketing company (IMC), said the situation in Southern California is another example of the trends since January. Strong economic growth, low unemployment, a shortage of truck capacity, and the electronic logging device mandate reducing driver productivity have combined to form a perfect storm to push freight to the railroads, even after the service problems this winter.

“Right now we’re street turning more boxes,” Rich said, referring to the practice of using the same container from one job to the next, rather than exchanging boxes. “Literally, every box we have going to the West Coast we’re strategizing on how we can street turn it and we’re only in the second quarter. Usually we don’t spend this much time on street turns until October.”

Drew Roy, director of intermodal operations for Scott Logistics, said that asset-owning IMCs are in a more fluid position to continue to take on Southern California business, but even that opening is limited.

Roar Logistics and most other IMCs do not own their 53-foot containers but lease them either from the Class I railroads or private-asset owners such as Milestone Express or COFC Logistics. Some IMCs, however, own containers and therefore have more flexibility.

“We would not be surprised if other [railroads] introduced the same policy for Northern California later in the year, as well as introduce similar measures in Chicago and Memphis, Tennessee, if volumes continue to rise in these markets,” Roy said.

LaGore and Rick Hauff, a group manager with Giltner Inc., agreed with Roy on Chicago, but were unsure about contract business in the Oakland-Stockton area or in Memphis.

“Shippers will have to be proactive and look to lock up capacity as soon as it is available. I believe intermodal can still be an option for shippers, they may just have to be a bit more flexible as capacity will soon be the next issue we face,” Hauff said.

Small, mid-sized shippers hurt the most

Most large shippers made the decision early on about capacity contracts for the peak season. Small shippers or mid-size shippers, however, without sophisticated operations or predictable volume, were most likely the ones waiting too long.

“These shippers are traditionally putting freight on truckload because that’s what they have always done. But they are soon going to say, ‘We’ve never run intermodal, but boy we can’t find any trucks’ and they are going to play on the spot market at a time when prices are at record highs,” LaGore said.

These shippers typically also hold the same leverage in terms of volume in a negotiation with the railroads. No matter the mode, carriers provide preferential treatment to those with a large volume of profitable freight. A small shipper will be unlikely to have as much sway in a negotiation.

“CSX now requires 500 shipments in a lane instead of 250 shipments to get lock-in pricing. UP tried to do the same thing but are now being more flexible with their small and mid-sized shippers. We told CSX that they need to do a better job communicating with these shippers about why they are doing this and how it will affect them,” Kristy Knichel, CEO of Knichel Logistics, told JOC.com in April.

While the railroads are tight-lipped about their individual thresholds, large companies will have a better chance to lock up any contractual opportunities than the small shipper.

Shippers sending freight to California in the driver’s seat

Although intermodal prices are higher in virtually all markets, shippers moving freight east to west have a better chance to get a favorable rate.

There is such a huge demand to move 53-foot containers to Los Angeles that IMCs may accept a smaller margin to accomplish it.

Rates from Dallas to Los Angeles, for example, are only up 5 percent versus the prior year. Prices from Seattle-Tacoma and Houston to Los Angeles are also up less than 10 percent.

“In an economy like this where we need equipment on the West Coast, we may be willing to lower some prices going west to feed the business coming back east. We have to use a pricing strategy to get the boxes where we need it the most,” Rich said.

“It makes the attractiveness of inbound [freight] elevated, while providing some, if only a little, leverage to the shipper to negotiate better than market rates. For example, ‘I send two inbounds to Southern California, so let me get one of those at my historical rate’,” said Ian Moy, director of national carrier sales and intermodal for Zipline Logistics.

But with the strong economy showing no signs of stopping, and the United States lifting the tariffs on China to negotiate a trade deal, shippers may have no choice but to buckle up and survive a bumpy ride for the rest of the year.