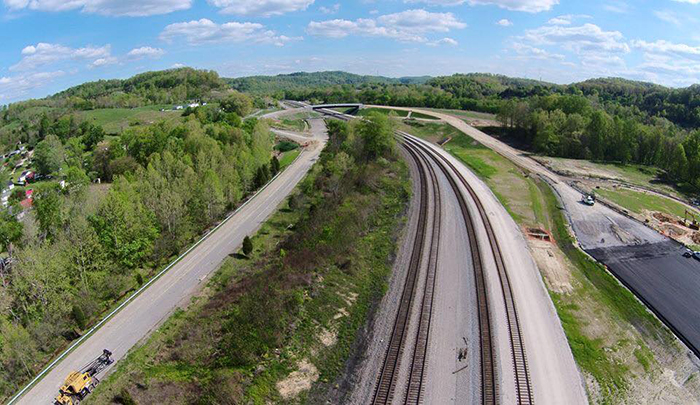 West Virginia has always been coal country, but a new intermodal terminal in the state’s western corner could help change that, riding on a crest of rising intermodal and declining carload volume.

The Heartland Intermodal Gateway terminal in Prichard, halfway between the Port of Virginia and the rail yards of Chicago on Norfolk Southern’s Heartland Corridor, is the first ever in the state. The terminal was made possible through a $12.7 million federal grant and $4.3 million a year in state railroad intermodal enhancement funds.

The West Virginia Port Authority, which owns the site, and railroad officials, who donated the land, have said they hope the new 76-acre terminal will mirror the success at other facilities like Front Royal, Virginia, and Greer, South Carolina

“They’re moving large amounts of containers,” said Neal Vance, port authority executive director, according to an Associated Press report. “They’re starting to see warehousing and distribution centers pop up along the edge of their properties. I really think we could potentially see that here.”

Not only do state officials see the terminal as a gateway to better times for the local and state economy, it is also an opportunity for NS to win over some intermodal business it has lost to over-the-road competitors in the past year.

While there are dozens of intermodal terminals across the country, the nearest facility to the Pritchard operation is 140 miles away in the town of Georgetown, Kentucky.

Although brand new, the terminal already has promise and prospects.

The state port authority has already identified 1,500 potential warehousing and distribution center jobs the new terminal could create. Meanwhile, Toyota Motor Manufacturing West Virginia has said it expects the terminal will help cut shipping costs for parts and finished products at its plant in nearby Putnam County, according to West Virginia’s State Journal.

Carload still dominates the railroad industry, especially in coal-rich West Virginia, but recent shifts in the energy market have taken a chunk out of the coal-heavy carload business. Coupled with an organic increase in intermodal volumes, the intermodal sector is playing a more and more significant role in the railroad business.

Although intermodal was also down around 1 percent in NS’s third quarter, it was up industry-wide.

NS executives have said they are confident the tide will turn in their favor as the company makes a concerted intermodal push. Tightening capacity and new federal regulations will hit the trucking sector, conversions will pick up the pace and the railway will win back whatever market share it has lost to over-the-road competitors, officials have told JOC.com.

“Put it in perspective, our domestic intermodal franchise has grown about 600,000 units. It’s a compound annual growth rate of a little less than 10 percent a year. When you think about that, that’s 100,000 to 200,000 units of growth,” Shawn Tureman, director of domestic intermodal marketing at NS, said back in October.