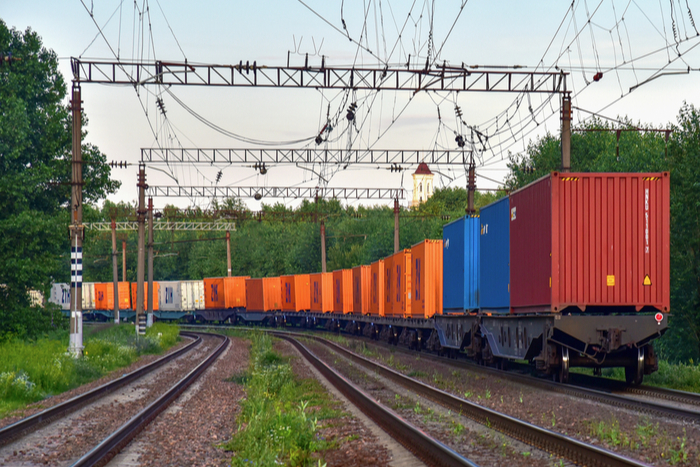 A train from China rolls through Belarus toward the Polish border, a key interchange point where congestion often delays cargo at times of heavy demand. Photo credit: Shutterstock.com.

Rail rates from China to Europe have more than doubled in the past few months, as the land bridge is swamped by shippers forced out of the air and ocean markets by tight capacity and severe equipment shortages.

Demand accelerated through the fourth quarter, placing available westbound rail capacity under severe pressure, despite a record 12,400 trains deployed in 2020 by China Railway Express, the state-owned operator of the rail network.

Rates in January for carrier-owned containers on China-Europe from terminal to terminal passed $10,000 per FEU, with the soaring demand for limited capacity quickly elevating rates from the $4,000 to $5,000 per FEU levels seen in October, according to an executive at a Europe-based forwarder who asked not to be identified.

Tony Cole, the head of ocean freight at Davies Turner, a UK-based forwarder offering services on the China–Europe rail network, confirmed to JOC.com that “rates per FEU without guaranteed space and equipment, [which is] still in very short supply, are over twice what they were back in October.”

Strong demand from European importers is pushing short-term rates on all modes out of China to levels never seen before, with the demand condensed into the last four months of 2020 and continuing through January, overwhelming capacity across air, land, and sea.

On ocean trades, the average China-North Europe spot rate as assessed by rate benchmarking platform Xeneta reached $8,108 per FEU on Jan. 12, rising almost vertically from $2,170 per FEU on Oct. 1. Shippers have also reported receiving quotes as high as $16,000 per FEU on ocean routes out of China for cargo outside weekly allocations agreed with carriers, and those that can are delaying orders in China until after Chinese New Year in the hopes rate levels will ease.

Shippers shifting to air are also facing budget-busting prices, with travel bans and widening COVID-19 lockdowns across Europe keeping passenger planes grounded and removing more than half the available capacity from the market. The space constraints pushed Shanghai to Europe air freight rates up to $4.76 per kilogram this week, an increase of 94 percent from the same week last year, according to the TAC Index.

The primary selling point of the China–Europe rail network is that it has traditionally been more expensive than ocean but far cheaper than air. Rates are now more in line with sea freight, but even though rail prices have doubled in the last few months, the rate per kilogram remains well below air freight. A Davies Turner calculation on its website shows that China–Europe rail will cost shippers $0.66 per kg.

Thomas Kowitzki, head of China rail and multimodal Europe at DHL Global Forwarding, said the forwarder’s China-Europe rail volume in 2020 grew 94 percent compared with 2019 levels, and he warned that rail rates were expected to continue rising until Chinese New Year in mid-February.

“With the beginning of the year, we still see strong demand for rail solutions westbound from China to Europe, and vice versa,” Kowitzki told JOC.com, adding that container shortages in Asia, and tight train capacity at both ends, were behind the “skyrocketing” rates.

“We have secured additional volumes for our customers by deploying various dedicated DHL blocktrains,” he said. “However, the situation remains volatile with tight capacity and rates on the rise.”

Yves Larquemin, Dachser managing director of air and sea logistics for North Asia, said in a statement this week that the shortage of air and sea freight capacity has created greater demand for rail freight.

“The current peak season has added fuel to the market, so it brings even more customers from various industries, such as retail, to look to rail as an alternative solution,” he said.

Accurate annual throughput levels for the entire network are difficult to find, but media reports that 1.1 million TEU was moved between China and Europe in 2020 are supported by figures from the two main operators on the routes. Russian Railways announced that it had carried 502,000 TEU on its China-Europe network last year, while UTLC ERA, which operates the narrow gauge part of the network across Kazakhstan, Russia, and Belarus, said in a statement it had moved more than 500,000 TEU since the beginning of 2020.

After a quiet start to 2020, rail volumes from China to Europe began to increase from mid-March as air routes were shut down. Kowitzki said container volume accelerated from July, and even though rail operators deployed a record number of trains on the network to accommodate the rising demand, rail wagon equipment shortages grew, with congestion at the interchange points on the China-Kazakhstan and Belarus-Poland borders.

“The system began to shake and from September to December even increased train capacity was no longer able to cope with the demand,” he said. “The availability of containers became more of an issue and rates started to increase due to the shortage and in line with the development in ocean and air freight, where capacity was also tight.”