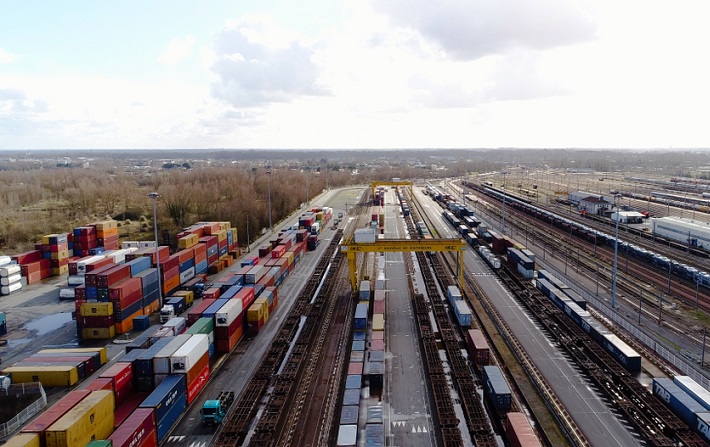 The potential of Europe's rail sector was underscored by the 1.53 billion euro ($1.77 billion) bid by US investment bank Morgan Stanley’s infrastructure unit, Warwick Holdings, for VTG, which Europe’s leading railcar leasing and rail logistics company has rejected. (Above: A rail yard in France.) Photo credit: Shutterstock.com.

LONDON — The rail industry, long regarded in Europe’s freight transport, particularly containers, may see an increased market share, if it can cash in on a rash of commercial and political opportunities.

These could be the best of times for rail freight operators: the dominant trucking sector’s shortage of drivers and capacity, rising fuel prices, and toll roads are boosting rates; barges still face congestion at Rotterdam and Antwerp, Europe’s top ocean container hubs, and plans to significantly increase inland waterway capacity are at a virtual standstill.

Also, the “love affair” between rail and governments and shippers is deepening amid growing fears of surging carbon dioxide (CO2) emissions from trucks on increasingly congested roads across the continent.

There are plenty of opportunities for the rail sector to boost its European transport market share — a market that has grown by nearly 25 percent over the past 20 years and is projected to expand by 50 percent by 2050, according to the European Commission.

The potential of the rail sector was underscored by the 1.53 billion euro ($1.77 billion) bid by US investment bank Morgan Stanley’s infrastructure unit, Warwick Holdings, for VTG, which Europe’s leading railcar leasing and rail logistics company has rejected.

Warwick Holdings — which has a 27 percent stake in Hamburg-based VTG — has agreed to acquire the 20 percent holding of Kuehne Holding, headed by Klaus Michael Kuehne, who has a 25 percent stake in ocean carrier Hapag-Lloyd.

VTG’s fleet grew by around 11,000 to more than 94,000 railcars earlier this month when it closed on the 780 million euro acquisition of Paris-based Nacco Group, the European rail leasing unit of CIT Group, the New York-based financial holding company.

Still, the rail sector’s woes are highlighted by the negative news from the continent’s two leading rail companies.

“Our rail freight business did not have an easy first half of 2018” due to rail strikes in France and a serious storm in January, according to CEO Richard Lutz. “We also faced problems of our own making. However, we will be addressing those problems in a lasting way.” The company is expected to post a full-year loss of 150 million euro to 200 million euro.

The freight unit of SNCF, France’s state-owned railway, which has racked up debts of more than 4 billion euro, was hard hit by a wave of strikes earlier in the year in response to the government’s planned reforms to modernize its heavily loss-making parent.

The reforms, which are the biggest shake up since the French rail industry was nationalized in the 1930s, focus mainly on the passenger business and are unlikely to have much of an impact on SNCF’s freight unit, which has been steadily losing traffic to private firms, including foreign operators, since the EU liberalized the rail cargo market.

There have been some positive signs, however, with growth in European rail freight transport in 2017 continuing into this year, particularly in Poland and Sweden. “Development was supported by strong demand for capital goods and dynamic trading. Positive momentum was generated mainly from transport through the North Sea ports of Antwerp, Rotterdam, and Hamburg,” according to Deutsche Bahn.

Rail freight shuttles through the cross channel tunnel linking the UK and France that compete with roll-on, roll-off (ro-ro) ships are breaking records, despite fears that London and Brussels won’t reach agreement over Brexit — the UK’s exit from the European Union on March 29, 2019.

Getlink, the operator of the freight shuttle, posted its best-ever third quarter with nearly 139,000 trucks transported in September, the fifth consecutive monthly record that has pushed total traffic in the first nine months of the year to just short of 1.26 million trucks, an increase of 3 percent from the same period in 2017.

But the bottom line is that despite government support across Europe for environmentally friendly rail transport and the steady launch of new services by private rail operators and multimodal forwarders, rail has failed to squeeze market share from rival modes, particularly road transport.

Rail hasn’t capitalized on the growth of freight traffic in Germany, as trucks have boosted their market share despite widespread road construction, impassable bridges, and increasing traffic jams along with rising fuel costs, driver shortages, and the resulting capacity crunch.

However, the rail industry has another chance to up its game because the German government will raise distance-based road tolls next year, just months after it extended the total toll route network from 15,000 kilometers (9,320 miles) to 52,000 kilometers. Berlin also plans to halve rail track access charges in a bid to shift traffic off the crowded highways.

Nevertheless, a major rail freight boost isn’t in the cards because top operator Deutsche Bahn is seeking to trim its investment spending as its debt approaches 20 billion euro.

But Deutsche Bahn, which runs Europe’s biggest rail cargo business, is upping its 10-year-old Europe-China service with the recent establishment of a new unit, DB Cargo Eurasia, which has a goal shifting more freight onto the route and hitting its 2020 target of 100,000 containers, up from an expected 90,000 this year.

Deutsche Bahn is also testing a sea route between Kaliningrad, the Russian enclave between Poland and Lithuania, and the German port of Rostock, in response to shippers’ requests so it can ship goods from the Baltic to the rest of Europe with greater speed and flexibility.

But the outlook for some European countries isn’t looking good, particularly for the Netherlands, whose 7,300-kilometer network is almost full. There is no point in building new lines, according to infrastructure manager ProRail, which is calling for improved utilization of the current capacity to handle an expected 8 percent increase in traffic in 2019.

The international outlook is more bullish, however, with the number of trains on the Betuwe route, the 4.7 billion-euro dedicated freight link to Germany, jumped 17 percent in 2017 to 25,100, after two consecutive years of decline, due to construction work on the German side of the border. Traffic on the 11-year-old track is expected to reach 34,500 to 37,500 trains in 2025 after the link with Germany, the port of Rotterdam’s dominant hinterland market, is completed and rise to a peak of 37,000 to 43,000 trains in 2030.

Further, there are some success stories across the sector that are hidden by rail’s failure to boost its European market share. Swiss intermodal operator Hupac, which operates about 110 trains a day, boosted first-half traffic by 8 percent from a year earlier to 805,693 TEU, helped by a 9.4 percent jump in trans-alpine traffic. ERS Railways, which was acquired from Genesee & Wyoming Inc. along with the US firm’s 47 percent stake in Hamburg-based rail company boxXpress, in June, contributed to the first-half increase by extending Hupac’s hinterland port network from Rotterdam and Antwerp to Hamburg.

The port of Hamburg is also a stand out success with about 200 daily rail services hauling 2.4 million TEU a year, accounting for 42 percent of its hinterland traffic, including bulk cargo. Rail is likely to boost its market share, due to the lack of barge transport and increasingly congested roads leading to Europe’s third-largest container port.

In addition, new services continue to be launched on a regular basis, underscoring the appeal of rail to shippers, as well as ports, who are desperate to ease the flow of containers to and from their hinterlands. France Helvetia Express, a thrice-weekly rail shuttle connecting France’s top ocean container hubs Le Havre and Marseille-Fos, commenced operations in September, targeting the estimated 350,000 to 400,000 TEU of Swiss container traffic passing through French ports each year that is transported to the landlocked nation mainly by trucks.

Also, the first direct shuttle service between Rotterdam and Budapest was launched this month by Rail Cargo Operator (RCO), which says it is responding to demand from shippers. RCO added that the frequency could increase, as the Hungarian capital becomes an increasingly important transport hub, with onward shipment to Romania and Turkey and connections with the rapidly growing Europe-China rail route.

Ocean carriers and shortsea lines are also boosting their rail services in response to growing shipper demand. Mediterranean Shipping Co., the world’s number two container line, has just launched a new rail service connecting Spanish agricultural producers and other exporters to international markets via the port of Valencia, a major Mediterranean hub. It complements MSC’s rail service between Seville and Sines, Portugal, which was launched earlier in the year.

P&O Ferrymasters, a UK ro-ro shipping line, has just acquired 150 huckepack trailers to meet rising demand on its route between the port of Rotterdam and Poznan, Poland, which added a sixth weekly service in the summer. The ro-ro subsidiary of P&O Ferries, which is owned by Dubai’s DP World, also has a rail terminal in the Romanian city of Oradea, which facilitates the onward movement of freight to the UK from Asian countries via China’s Silk Road rail route. The company, which has a fleet of more than 20 ships, includes rail along with road and sea links in its services across 13 European countries with annual traffic of about 2.3 million freight units.

Meanwhile, Italy is investing in its rail network and rail facilities at its ports in a bid to become a European gateway on the Chinese route, according to Maurizio Gentile, CEO of the country’s rail infrastructure group. The overwhelming majority of cargo arriving in Italy from China through its ports is transported inland by trucks, but “in order to generate a modal shift to rail, Italy must make intermodal transport more competitive by addressing bottlenecks at transshipment points.”

There are doubts, however, whether Italy’s populist government, which took power in May, is willing to invest in large public infrastructure projects approved by previous administrations. Most at threat is the multibillion-euro 57-kilometer rail tunnel under the Alps linking Turin and Lyon, which claims it will at least halve the 4 million trucks transiting the roads south of the Alps between France and Italy annually. But Italy’s Infrastructure Minister Danilo Toninelli has said that when he studies projects such as the Turin-Lyon tunnel, “I can only feel anger and disgust for how the money of Italian citizens has been wasted.” Toninelli has commissioned a cost-benefit analysis for the project before making a final decision amid divisions in the government. The League, the junior partner in the governing coalition, backs the project while the larger Five Star Movement attacked it during the election campaign, claiming it made sense 30 years ago but not now.

Politics also play a role in the planned reopening of the Iron Rhine rail link between the port of Antwerp and Germany’s main industrial region, which was closed in 1991. The problem is that the track, which would shift cargo from clogged highways between Belgium and Germany, passes through the province of Limburg, Netherlands, and requires investment by the Dutch government in a project that risks undermining the competitiveness of the port of Rotterdam.

The port of Antwerp faced a similar problem a few years ago when the Dutch Parliament took its time to approve the deepening of a stretch of the Scheldt River that passes through the Netherlands and is the Belgian inland port’s access to the North Sea. Without deepening, the largest ships could only reach Antwerp at high tide, sparking speculation that the Dutch delays were a ploy to boost Rotterdam’s position as it was expanding its terminals to handle mega-ships.

Rail’s attraction to shippers was highlighted earlier this month when an estimated 15,000 people attended a rally in Valencia demanding the European Union fund a corridor linking the inland region of Aragon to Spain’s Mediterranean and Atlantic ports.

But the industry, particularly its state-owned sector, has to get its act together, if it is to substantially eat into trucking’s dominant and solid market share.