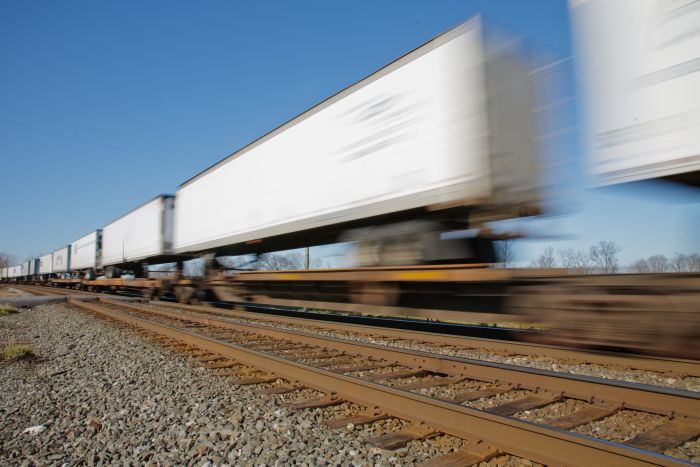 U.S. shippers expect to ramp up their conversion of freight from truck to intermodal rail to the highest level in a year and a half, according to a new survey.

But railroads are still going to scrap for that cargo with trucking motor carriers able to offer more competitive pricing, according to intermodal rail executives and pricing indices for intermodal and over-the-road transport.

According to a recent Wolfe Research survey of more than 600 supply-chain managers whose aggregate transportation budget exceeds $10 billion, despite low fuel prices and overcapacity in the over-the-road segment, expectations for intermodal volume growth rebounded in the first quarter to their highest level in one-and-a-half years. Looking ahead, shippers told the New York-based transportation research firm they expect 14 percent of their total over-the-road volumes to go through intermodal in five years.

That said, “intermodal is going to have to grow the old-fashioned way,” Larry Gross, a senior transportation analyst at FTR Associates, told JOC.com Friday. “It’s going to have to earn it. It is a competitive environment out there, to be sure.”

The competition for valuable intermodal cargo is stiff. Freight volume expectations are now at their lowest level in six years, the soft energy market is wreaking havoc with carload traffic increasing the role of intermodal freight in profit margins and flush capacity on road and rails is driving down pricing industry-wide.

That’s going to be the case at least through the remainder of 2016, according to Wolfe Research. The firm’s survey of shippers in March and early April found that shippers diverted 1.9 percent of their volumes from truck to rail in the first quarter of 2016. That’s up 0.8 percent from the prior quarter in 2015. On the flip side, shippers moved 1.5 percent of their freight from rail to truck during the same period, up slightly from 1.2 percent in the previous quarter. The figures imply a net freight diversion to rail of 0.5 percent during the first quarter, a reversal of the 0.5 percent net diversion to truck in the fourth quarter.

Just because net conversions have swung in the railways’ favor does not mean they have won that cargo easily, as Gross indicated.

Surveyed shippers’ expectations for freight growth are now at the lowest levels in six years, according to the Wolfe Research report. Shippers expect just a 1.3 percent increase in same-store shipment volumes over the next year, down from the 1.6 percent reported in the last quarter of 2015 and the 2.2 percent growth reported exactly one year ago.

The overall volume slowdown has been experienced across the shipping industry, and is evident in the Class I railroads’ first-quarter figures.

Year-over-year intermodal volume comparisons were flat or down in the first quarter of 2016 at four of the six Class I railroads that have reported their first-quarter figures. It’s a list that includes Canadian National Railway, Kansas City Southern Railway, Union Pacific Railroad and Norfolk Southern Railway.

International intermodal volume has been especially hit hard in the early months of 2016.

CP executives on a first-quarter earnings call with investors and analysts called international intermodal business a “wild card,” and CN leadership bemoaned a “slowdown” at the Port of Prince Rupert on Canada’s West Coast. Meanwhile, UP maintained that high inventories, a decline in premium shipments, weaker peak seasons and sluggish retail sales have been weighing down intermodal business industry-wide.

Hub Group was an outlier in the first three months of the year. Intermodal volume at the Oak Brook, Illinois-based trucking and transportation provider increased 3 percent year-over-year in the first quarter, and the company even revised its outlook. Hub now estimates it will see intermodal volume rise anywhere from 2 percent to 4 percent, an improved forecast from the 1 percent to 3 percent increase predicted in late 2015.

Nevertheless, Hub’s chief executive David Yeager did say on the company’s first-quarter earnings call that those volume gains will not be easily won.

“We're seeing the over-the-road carriers being very aggressive even on what has been traditionally a lot of short-haul intermodal lanes,” Yeager said last Tuesday. “We have actually seen greater amounts of conversion back to over-the-road from intermodal than we've seen in many, many years.”

Rail service is no longer the chief villain of intermodal business. Once an industry bugaboo, rail service level metrics have improved significantly in recent months.

As of April 7, intermodal train speeds were continuing to trend up, according to Gross. The four-week average for rail speeds among all Class I railways, excluding CP, as of that date had increased 0.3 miles per hour to 32.3, the best on record since 2010.

“The trains are running very well, which is a good thing,” Gross said. “But then, you’d have to expect that with volume down as far as it is.”

It’s those inventory levels that continue to stand at historic highs — a holdover from the 2014 to 2015 U.S. West Coast port crisis when shippers, especially retailers, retooled their promotional calendars to cope with the congestion and slowdowns.

“Notably, the spread between higher and lower safety stocks is the biggest we’ve seen in our survey. We think that higher inventory levels have been a drag on freight volumes the past few quarters, and we expect this headwind to continue for now,” Wolfe Research analysts reported.

Not only are volumes down, but capacity remains flush on both the road and rails.

“It is a competitive environment out there because there is sufficient truck capacity out there for the moment and that’s being exacerbated by what’s happening on the carload side with volumes down significantly as they are,” said Gross.

Coal and energy-related cargo volume was down double-digits in the first quarter at all the Class I railroads that have reported their first-quarter earnings to date. The result is that intermodal cargo has become that much more valuable to the railways.

“There’s only one place where the railroads really have a good chance of converting traffic from truck to rail and that’s in intermodal,” Gross said.

Not only are railroads competing among themselves for valuable intermodal cargo. They’re still competing with trucks.

According to the Wolfe Research survey, roughly 78 percent of shippers polled cited overcapacity in the truckload market, a slight improvement over 82 percent in late March but still up from 65 percent in the fourth quarter of 2015.

In order to increase their chances of winning over market share, every player in the industry is making its rates more competitive.

Shippers expect their average intermodal rail rates to decrease 0.1 percent over the next year, down from 0.9 percent in the last quarter of 2015.

“This is the fifth straight quarter that intermodal pricing expectations have worsened,” Wolfe Research pointed out.

Shippers also pointed to UP and NS as being most aggressive among the rails in raising rates, the Wolfe Research team said.

The over-the-road market, however, is playing the pricing game, too. According to Hub Group’s Yeager, truck rates have been and are going to be changing more “quickly” and “dramatically” than what’s experienced on the rails.

Truckload rate expectations in the first quarter recorded by Wolfe Research decreased for the first time since 2010. On average, shippers expect their truckload rates to fall 0.9 percent over the next year. Meanwhile, expectations for less-than-truckload rates are now at their lowest levels since the second quarter of 2010. Shippers expect a 0.9 percent increase in less-than-truckload pricing over the next year, down from 1.7 percent in the last quarter of 2015.

The pressure on surface transport rates is also evident in the Cass Freight Index, the Cass Truckload Linehaul Index and Intermodal Price Index, all measures of freight volume, shipper spending and pricing drawn from data from more than $25 billion in annual freight bills.

The Truckload Linehaul Index peaked in January 2015, rising 7.9 percent year-over-year, before beginning its long slide into 2016. The 0.6 percent drop in the index indicates not a slower growth rate, but an actual decline in truck rates that is pushing intermodal rates lower.

Most analysts, though, including the Wolfe Research team and Gross, say they believe the railways will ultimately take market share from trucks over the long term.

“Over the longer term, we expect the rails to take market share from trucks, given: 1) cost savings, even at reduced fuel prices; 2) political pressure to divert freight from increasingly congested highways; and 3) improving rail capacity and service levels over time,” Wolfe Research reported.

Shippers surveyed expect intermodal to increase from about 12 percent of their current over-the-road volumes to about 14 percent of total volumes in five years, according to Wolfe Research.

Gross said he also expects those factors Wolfe listed will play a stronger role in conversions as the industry heads into 2017.

“Everybody is going to have to really work hard this year,” Gross said. “But that is going to change pretty significantly as we get into 2017.”