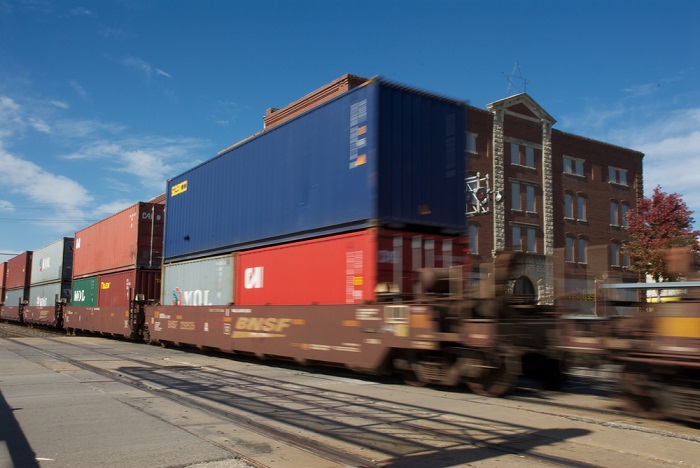 Not all one-time intermodal rates are higher than truckload. (Above: A freight train travels in Kansas, United States.) Photo credit: Shutterstock.com.

US intermodal rail is traditionally a cost-effective alternative to truckload, but shippers should pay attention to spot rates because a truck is actually cheaper right now in a number of key lanes.

Not all one-time intermodal rates are higher than truckload, but rate comparisons show pricier spot rail versus spot truck rates from Los Angeles to Chicago, Dallas, and northern New Jersey. The dynamic is somewhat counterintuitive considering the double-digit increases in spot and contract truck rates, but it shows railroads have been quite aggressive in controlling demand to ensure service levels through record-high spot quotes.

Railroads use pricing to balance volume against service. In a time when operating ratios matter, at least to railroad CEOs and investors, some freight is poor. High volume, low-yielding freight can hurt margins and clog the network.

“We're interested in growing both price and volume. And we are intently focused on making sure that we receive the value that our capacity is worth when we do both of those things,” said Union Pacific Railroad CEO Lance Fritz on a second-quarter earnings call July 19.

One-time transactions are uncommon in the railroad universe. Ocean carriers sign multiyear contracts with their rail partners. In domestic intermodal, a vast majority of cargo moves under contract, perhaps more than 90 percent, according to intermodal market companies (IMCs). By comparison, as much as 25 percent of truckload hauls are done on the spot market, according to DAT Solutions.

But as containers become harder to secure, and with train speeds below five-year averages, throttling rates up and down can keep rail demand in check.

To study the issue, JOC.com examined 12 outbound lanes from Los Angeles by comparing spot prices in the two modes. Rates were provided by Intek Freight and Logistics and DAT. There were only two destinations — Chicago and Dallas — in which intermodal was 10 to 15 percent cheaper last month. In the remaining 10, truckload was cheaper.

JOC used a rolling four-week average on intermodal and a 30-day average on truckload, covering September 2018. The rates don’t include broker margins.

One of the major intermodal lanes — Los Angeles to Chicago — demonstrates this volatile market.

Intermodal spot rates surged this August to $4,785. At the same time, DAT’s average truckload rate was $3,800. In September, Intermodal rates returned to about $3,300, while truckload rates remained the same. But in the week ending Oct. 1, intermodal jumped again to nearly $5,000.

On a year-over-year basis, intermodal rates have skyrocketed 50 percent.

Larry Gross, of Gross Transportation Consulting, explains there is a difference in seasonal patterns between rail and trucks.

Los Angeles outbound to Dallas follows the same trajectory. Intermodal spot rates began the summer at around $4,000 and surged to $5,700. In September, rates returned to normal — about $3,200 — before climbing to nearly $5,000 this past week. DAT’s average truckload spot rate on this lane was $3,679.

Los Angeles to northern New Jersey intermodal spot rates have been more than $5,500 frequently since May, whereas the truckload rates hover around $4,500 to $5,000.

In these examples, an IMC would recommend using a truck. Most of the talk this year has been centered around truck to rail conversation, but these prices may cause some flow in the other direction.

For shippers, a good rule of thumb is to shop around. Even if they’re under contract, not every rate is better than spot truckload. Price comparisons can save shippers money when every cent counts towards remaining within transportation budgets.