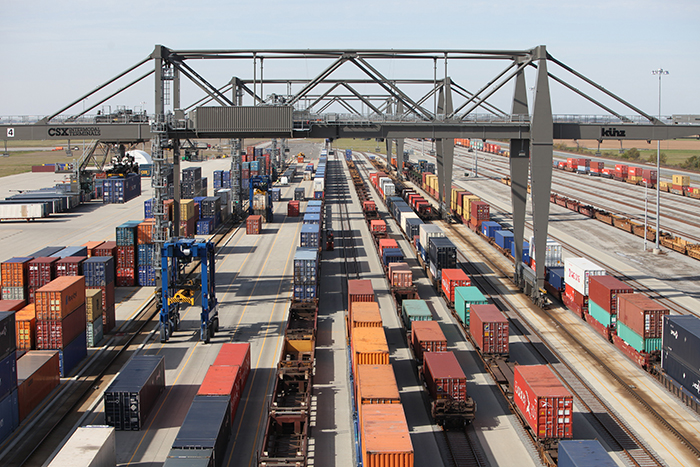 Average intermodal spot rates for for the top 18 lanes the week ending Dec. 21 were down 1.4 percent week-over-week and 14.2 percent year-over-year at $2,293.57, according to data on all-inclusive 53-foot door-to-door spot pricing quoted by railroads and provided by IDS.

The Indianapolis-based 3PL, though, warns shippers that the trend could easily reverse course if the winter weather remains as unpredictable as it has been.

“The Midwest and the East are experiencing very unusual warm weather patterns,” Shelli Austin, president of transportation at IDS, told JOC.com. “I am so concerned it is the calm before the storm.”

El Niño, the periodic warming of the Pacific Ocean, can have a number of effects on weather, everything from heavy rain to extreme drought, persistent warmth to stubborn cold. Those effects were no more evident than over the Christmas weekend. The holiday marked the warmest on record by far for a vast stretch of the Eastern Seaboard but was followed almost immediately by the first snowfall of the year in New England, tornadoes in Texas, a fierce ice storm in Chicago and freezing weather in Southern California.

Austin said the industry has seen some delays and slight capacity constraints, especially in the Northeast, due to this “sudden imbalance of weather.” Rates, however, have continued on their relative downward trend even with the exception of the weekly imbalance swings, she said.

According to Austin, flush capacity in the wake of a particularly muted peak shipping season on the West Coast continues to keep rates historically low for outbound cargo there.

“The California market is very weak and plush with capacity,” Austin said.

Inventories at retailers nationwide have been much higher than they typically are this late in the year after shippers retooled their promotional calendars before and during the protracted labor negotiations between the International Longshore and Warehouse Union and the Pacific Maritime Association.

The result has been a less traditional peak season and less predictable spot rate market. It’s contributed to a general decline in demand for intermodal services which in turn has contributed to falling spot rates.

“It is common for this time of year for the volumes to decrease and capacity to open up however since the capacity never got tight this appears to be an even greater reduction than in years past on volumes as capacity continues to be very loose,” Austin said.