UP suffers delays out of LA-LB ahead of peak season

UP suffers delays out of LA-LB ahead of peak season 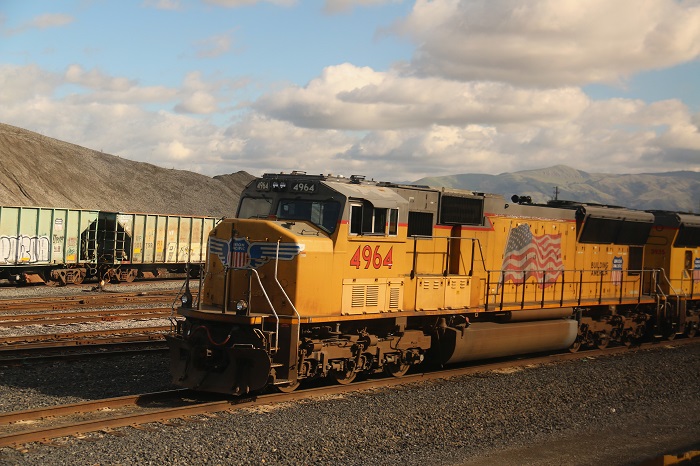 Union Pacific continues to add crew, equipment, and locomotive power throughout its network, with Los Angeles-Long Beach receiving special attention — with the goal being an operation that can handle likely increased freight volume this peak season. (Above: A UP train in California, United States.) Photo credit: Shutterstock.com.

Union Pacific Railroad continues to deal with occasional delays in positioning intermodal trains at marine terminals in Los Angeles-Long Beach, and pulling trains from the terminals to inland destinations, as it prepares for the increased freight volumes anticipated during the upcoming peak season.

Yusen Terminals in Los Angeles, where UP is adjusting to a consolidation of shipments from the three former lines that formed the Ocean Network Express (ONE), is a major focus of the railroad’s attention. “Last week UP was late in departing and arriving trains,” Alan McCorkle, Yusen’s vice president in Los Angeles, said Monday. That caused a day or two delay in the movement of trains. Power (locomotive) and rail car shortages have occurred sporadically since the global launch of ONE on April, he said.

The formation of ONE from NYK Line, MOL, and “K” Line was a proud day for UP when it captured the intermodal business from the three lines, but it also created an “ocean of challenge,” as UP stated in its Inside Track publication. Creighton Reinhard, who manages the ONE account at UP, noted that he coordinates internally among more than 10 departments and hundreds of employees to manage intermodal moves to and from all of the West Coast gateways.

UP has contended this year with equipment and crew shortages throughout its US network. In a customer advisory dated April 27, UP noted that operational metrics on its US network were “trending in the right direction” following weather issues in the northern region, heavy track maintenance work in the western region, and local switching problems and delays in the southern region, especially in Texas, in the first quarter.

UP in the first quarter increased its train, engine, and yard workforce 8 percent, the advisory stated. Approximately 800 employees were added in the training pipeline, with the goal of graduating about 200 trainees each month. UP modified its locomotive repair schedule to return about 225 units from storage and entered into a short-term lease for an additional 100 locomotives.

The 12 container terminals in Los Angeles-Long Beach have contended with rail service issues on and off for more than a year now, caused in part by changes in vessel rotations following the global restructuring of ocean carrier vessel-sharing alliances in April 2017. On the US West Coast, ocean carriers have intermodal contracts with either UP or BNSF Railway, and sometimes with both railroads. When an alliance shifts vessel calls from one terminal to another, rail services must also be adjusted.

Restructuring of the carrier alliances from four to three last year produced a shuffling of vessel and intermodal rail services at many ports, but the impact in Los Angeles-Long Beach was the greatest because 12 terminals were affected by the changes. Formation of the ONE line from three former companies effective April 1 this year magnified the problems at Yusen, which got much of the intermodal business that was formerly spread out over three terminals in the Los Angeles-Long Beach port complex.

The terminals are attempting to smooth out rail and vessel operations now, when cargo volumes are still building from the slack winter months, before the peak shipping season begins in late July and runs through October. US import growth in the winter and spring has been about 4-5 percent year over year and is projected to increase to 5-6 percent in the second half of the year, according to Alphaliner.