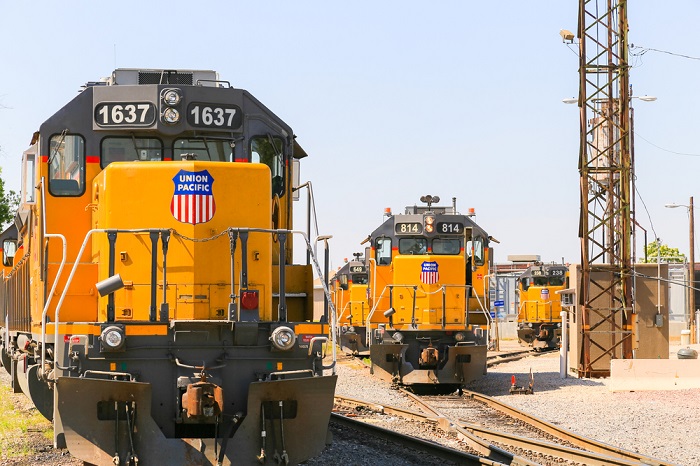 Union Pacific Railroad will begin a two-year process to implement precision railroading to address poor service to shippers this year, but it’s also an operating model that customers tend to believe is more about operating ratios than service, and one in which shippers have seen a service-detrimental rollout when CSX Transportation undertook a similar strategy.

Precision railroading (PR), founded by the late E. Hunter Harrison, is an operating model that eliminates waste in a network. Harrison implemented the model at Canadian National Railway, Canadian Pacific Railway, and CSX before his death in December 2017. PR reinvented how to route freight across the country and how to most efficiently use resources.

UP could use a shot in the arm because its service and operating ratios trail peers. Intermodal volume grew 4 percent through June 30, but average train speeds are about 4 percent slower than in 2017 as of September, and last year was 4.4 percent slower than 2016. Terminal dwell times, or how many hours freight idles in a terminal, rose 7.6 percent in 2017 and are up nearly 5 percent year over year as of September. Altogether, UP is handling more containers but not offering an exceptional customer experience to many shippers. By implementing Unified Plan 2020, the official project name, UP hopes to win back goodwill from shippers and shareholders.

"We are not currently meeting customer expectations," said Lance Fritz, UP's chairman, president, and CEO. "Unified Plan 2020 is our path forward to secure our place as the industry leader in safety, service, and financial performance."

Supporters of PR believe that by running longer trains and eliminating waste, shippers will receive a higher level of service and operating ratios can be lowered to levels that deliver value to shareholders. Critics argue that PR prioritizes shareholders over service, but supporters believe shippers and shareholders both benefit. By offering fewer weekly trains, PR supporters believe longer trains can be built and more reliable service can be sustained because equipment is being put to better use.

Unified Plan 2020 will be rolled out in phases across the network. The plan will first be implemented on UP’s operations between Wisconsin and Texas.

Frustrated shippers remember how customer relationships frayed in each of Harrison’s stops, and many have concerns about whether this will also occur for UP.

“In a nutshell, [precision railroading] means doing less with less,” testified Brad Hildebrand, vice president at Cargill, Inc., at an Oct. 11, 2017 hearing into CSX’s service woes after Harrison implemented PR.  His concise statement speaks to the criticisms of many rail shipers.

Critical shippers could point to UP’s emphasis on achieving a 60 percent operating ratio by 2020 and eventually 55 percent as a nod to shareholder concerns taking precedence over service.

Analyst: UP has room for productivity improvement

Ben Hartford, industry analyst with Robert W. Baird, believes labor productivity is a place in which UP can eliminate waste.

“Using 2017, [UP's] labor expense per carload is nearly double that of [CN]. Locomotive productivity [measured as revenue per average locomotive] is also roughly half of CN’s. We would expect these areas to be key focuses for UP under a [PR] plan,” he wrote in an investor’s note.

Harrison and successor Jim Foote could give us a preview of what’s to come in UP under his model. Harrison eliminated nearly a dozen hump yards, ceased service on 327 origin destination pairs in October 2017, eliminated domestic intermodal service to Detroit as of September, cut interline service with UP on 192 lanes, and simplified steel wheel service through Chicago by changing destination terminals for shippers in Baltimore, Philadelphia, Boston, Detroit, Cleveland, Cincinnati, and Columbus, Ohio.

Shippers were displeased with those announcements but railroad metrics show that CSX’s train speeds are higher than a year ago and terminal dwell times are down, although the railroad revised its calculations last autumn. Train speeds are nearly 15 percent faster and terminal dwell times are down about 13 percent so far this year, and the rancor of last year from shippers seems to have become less intense.

UP will hold a conference call on Sept. 19 to outline its plan. One key unanswered question is — who will lead the effort?

Cindy Sanborn, UP’s regional vice president of transportation for the Western Region, worked under Harrison as his chief operating officer but was ousted last autumn, as Harrison restructured management by adding Foote and other PR veterans. UP has not announced any hires yet of anyone who has extensive first-hand experience with Harrison during his time with CN, CP, or CSX.