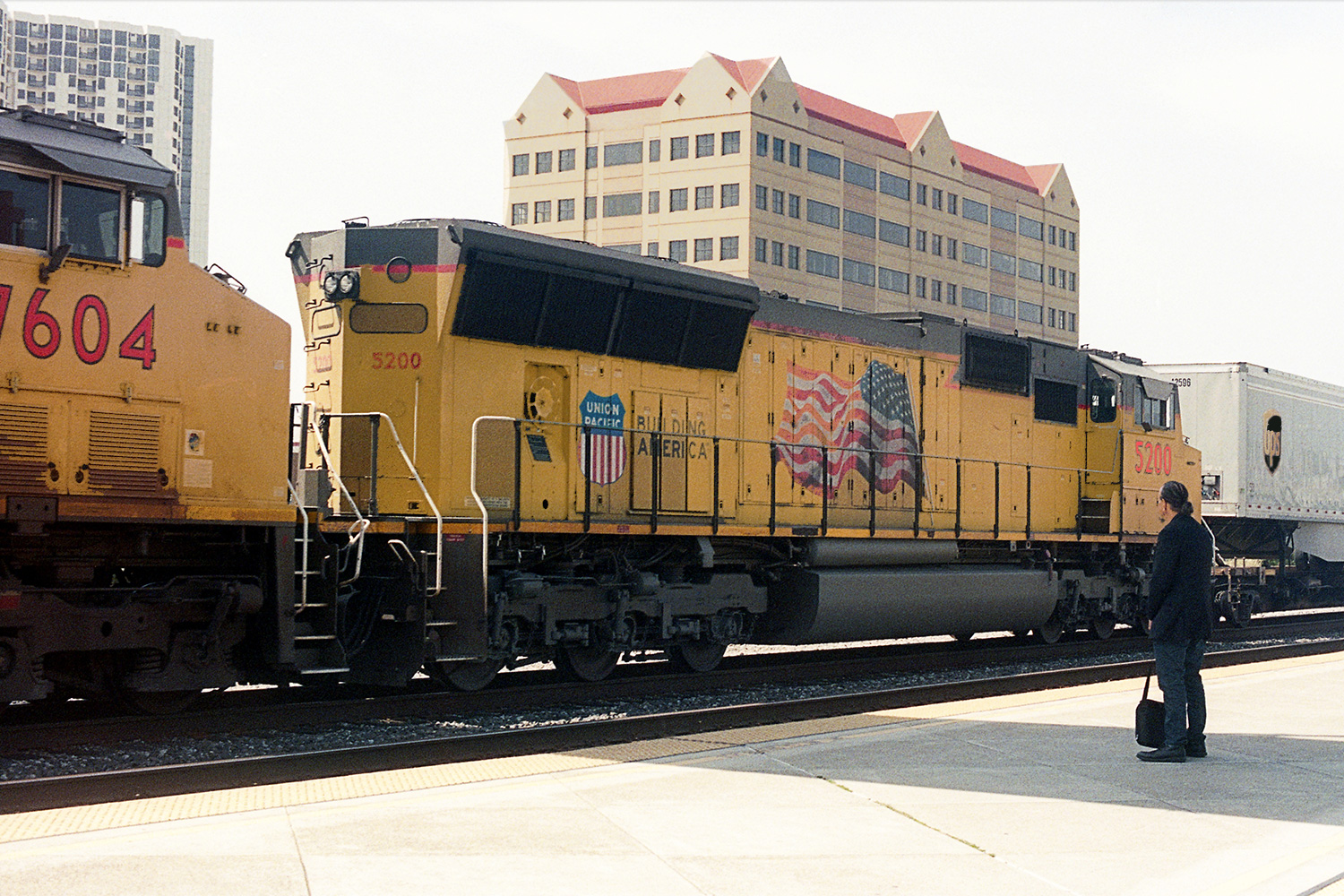 Shippers are struggling to get containers and space on Union Pacific Railroad because of a strong surge in parcel volume after locomotives and railcars were placed in storage this spring. Photo credit: Paul Sullivan/Flickr.

Shippers who use Union Pacific Railroad equipment in Southern California have seen spot quotes skyrocket more than 40 percent since June 1 due to the most severe equipment shortage in two years, according to four intermodal marketing companies (IMCs).

There doesn’t seem to be a single reason for the shortage, according to the IMCs — who spoke on the condition of anonymity — but rather a combination of UP not having enough locomotives, flatcars, and containers in circulation amid a surge in e-commerce business.

Union Pacific, while not directly confirming the equipment shortage, said it was moving containers to meet the boost in demand. “Union Pacific has experienced an increase in demand for rail containers as the economy is opening back up,” it said. “We are actively working to position containers from storage to ensure we meet our customer commitments.”

According to Mastercard, more money was spent online in April and May than the last 12 Cyber Mondays combined. US e-commerce spending grew 93 percent in May year over year, the credit card company’s research arm said.

With online shopping surging during the COVID-19 pandemic, UPS Ground has been inundated with packages. The company confirmed to JOC.com the surge in business has put more packages into its network compared with a typical spring and early summer, but would not offer specifics.

“While we have seen unprecedented demand for our domestic ground service over the last several months due to the surge in e-commerce, we don’t comment specifically on our network partners,” UPS spokesperson Dan McMackin said. “We certainly do use both our own and our vendors’ containers to move packages.”

The explosion in e-commerce is positive for Amazon, UPS, and FedEx, but it’s causing a spillover effect of capacity shortage for other shippers. Since June 1, IMC executives have said it’s next to impossible to secure rail-owned containers called UMAX and EMHU boxes, book a gate reservation, or find an open slot on a train.

“Maybe 25 to 30 percent of our equipment reservations are getting granted by the UP,” said an executive based in the south-central US. “And these are customers with annual contracts [the ‘UP mutual commitment program’]. And when you talk to the UP, they get mad at you for even asking.”

“It's been [hard to find containers] for three weeks now,” added an IMC owner based in California. “In addition, they do not have space on the trains even if we get equipment, therefore gate reservations are limited.”

Between April 1 and the second week of June, intermodal volume plunged more than 20 percent for the western US railroad compared with the same period in 2019, according to the Association of American Railroads (AAR). The coronavirus pandemic closed retail stores, factories, and caused a sharp decline in port volumes into Los Angeles, all stunting demand for rail transportation.

Demand for transportation on the West Coast, though, is roaring back this month. As the IMCs have observed, UP’s week-to-week intermodal volume has risen for three consecutive weeks, and six out of the last seven weeks, according to AAR data. UP’s sole week-to-week decline was around Memorial Day, a holiday week when every railroad experiences a drop in volume each year.

Last week — Week 25 — UP’s intermodal loads were down 4.8 percent versus a year ago, the smallest decline since the week of March 9, approximately two weeks before the initial impact of the pandemic on the US intermodal network. UP’s spot rates have risen as a result of the recovery off the historic lows this spring. Door-to-door rates between Los Angeles and Chicago have climbed from $2,345 per container on June 1 to $4,035 on June 23, according to InTek Freight and Logistics. The average per-mile rate has jumped 43 percent in the last four weeks on 12 outbound Los Angeles lanes, according to InTek, from $1.47 to $2.11.

InTek’s spot rate information, however, is one data set concentrated on rail-owned equipment.

A JOC.com analysis of InTek’s numbers and two asset-based IMCs shows a more modest climb. The Los Angeles-to-Chicago average of three rate tools is about $3,000 per container, or a 28 percent increase. The average of the 12 outbound Los Angeles lanes is about 10 percent higher today than on June 1. The two asset-based IMCs utilize their own containers rather than UMAX or EMHU containers.

Nevertheless, the IMCs agree conditions in Los Angeles are as tight as any point since 2018. An intermodal executive based in the Midwest said the equipment shortage rivals what the market would typically look like in late September during a busy peak season. There’s not much shippers can do about it.

“UP’s mutual commitment program has no teeth to it,” the Midwest executive said. “If customers don't fulfill their end of the bargain, then UP can fail to give capacity, UP can raise the rates, or UP can void the contract.  All the UP has to do is to endeavor to provide equipment and if they can't, then ‘oh, well that's your problem.’”

Behind the equipment shortage 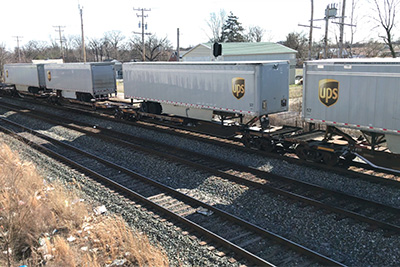 It’s impossible to know for sure what is causing the equipment shortage in Southern California because UP won’t comment directly. But the IMCs agreed one catalyst is the surge in e-commerce orders entering the UPS Ground network.

“UPS came in two weeks ago and took every empty Union Pacific had, and there's nothing the UP can do about it. UPS even took on additional containers from a leasing company,” said the Midwest executive. “The parcel business is just so strong right now with everybody shopping online that it’s creating a shortage for the rest of us.”

Mastercard reports year-over-year e-commerce sales in May surged 149 percent for home improvement goods, 64 percent for footwear, and 41 percent for apparel, which could explain the surge in UPS traffic on the Union Pacific network.

IMCs believe there are also other factors linked to the equipment shortage. An intermodal executive based in the Northeast with a significant book of business in Los Angeles blamed what he said was a slow response from UP to return locomotives and railcars back to service that had been stored during the big volume dip in the spring. The source said business was about as bad as possible through April, but intermodal shipments have jumped nearly 50 percent out of Los Angeles in the last six weeks.

“During the slowdown, the rails adjusted their network accordingly by parking assets and — pun intended — it takes some time to get that train rolling again,” the executive said. “The rails are generally good when it comes to steady, consistent business, but when the network takes a sudden and significant jolt, it is usually a struggle for a few weeks.”

The executive said the UP could have positioned itself better because the jump in demand was foreseeable as US states began moving to reopening businesses.

“It’s easier playing Monday morning quarterback, but what we are experiencing is not necessarily a surprise either,” he said. “In the rail’s defense, there was so much uncertainty from the shipping community of what to expect. Most planning seemed to be out the window and we were all just waiting for something to happen.”