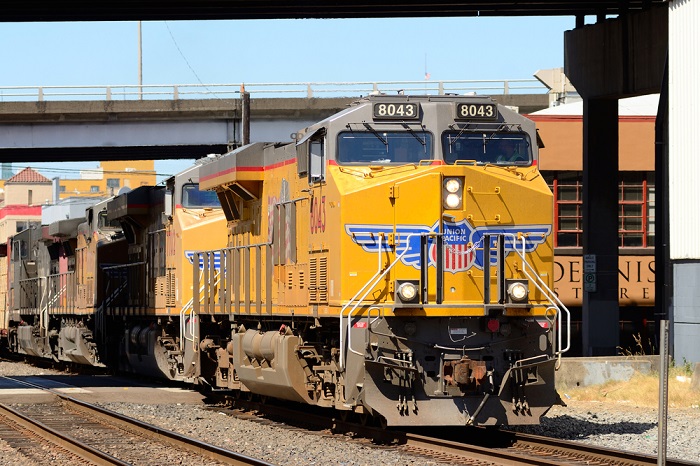 Rail shippers will have to scramble after Union Pacific Railroad and Norfolk Southern Railway announced the elimination of more than 425 domestic and nearly 100 international origin-and-destination interline pairs in multiple phases. Nearly two-thirds of the eastbound lanes will cease Jan. 8, 2019, and the rest on Feb. 5. All westbound cancellations will be effective Feb. 11.

This joint announcement will dump the responsibility of trucking containers between Chicago terminals onto shippers and intermodal marketing companies (IMCs). Railroads argue that simplification will unleash the benefits of precision scheduled railroading (PSR), shedding an inefficient and costly exercise of interchanging and redoubling efforts to provide reliable service by eliminating low-volume routes.

While IMCs aren’t necessarily pleased with the announcement, they acknowledge the timing is better than when UP and CSX Transportation slashed nearly 200 services in September because volume is much lighter in January and early February.

The decision marks the first major step by UP to implement PSR, a plan called Unified Plan 2020.

“The changes simplify transportation plans and will help us provide safe, reliable, and efficient rail service. We are communicating with customers and providing alternative options if service changes do not meet their needs,” UP said in a statement to JOC.com.

The scaling back of EMPU service — the formal name of the UP-NS interline network — came three months after UP and CSX slashed nearly 200 services, causing shippers to foot the bill on crosstown drayage in Chicago that can range from $80 to $300. The monetary impact depends on which of the four UP terminals and two NS terminals are used, but it should be similar to the CSX decision. While this complicates the work for shippers and IMCs, it eases the burden on railroads. By offering a door-to-door interline service, UP and NS took responsibility for exchanging containers between rail yards behind the scenes — either by flatcar or truck — which took coordination and was likely a drain on operating ratios. Now these hauls become ramp-to-ramp on two local trains with a dray in the middle scheduled by the IMC.

Jeff Heller, NS’s vice president of intermodal and automotive, told JOC.com that it’s also aiming to simplify the network, increase productivity, and provide better service to customers. Like UP, the eastern US railroad announced plans to install tenets of PSR within its network.

“The first step is to streamline the railroad, which will allow us to move assets faster and create capacity for our customers to grow. We also work cooperatively with the customers to create efficiencies in service. We are incorporating some elements and best practices of PSR because we believe that they work well within our network,” Heller said.

Shippers will suggest this is a move prioritizing shareholders over customers, while the railroads would argue that a PSR translates into a leaner and high-quality service for all. The remaining interline routes will also receive additional resources, including more exchanges via rail (steel wheel) rather than highways.

“The resulting service offerings will increase the amount of traffic that will utilize steel wheel interchange, particularly through the Chicago gateway, and improve overall effectiveness of the NS–UP interline services,” NS wrote in its announcement.

One intermodal marketing director, who spoke on the condition of anonymity, believes this change won’t be nearly as disruptive as CSX’s for his clients.

“A large portion of these lanes have not been competitive with truck for a long time. A vast majority are redundant. They don’t serve a purpose and we have trouble selling them. For example, we do very little outbound Texas business [on UP] south of Dallas,” said the intermodal director located in the Southeast. “I don’t see opportunities lost here. With CSX, lanes were eliminated that we were actively pricing.”

The biggest challenge for rail shippers and IMCs in Chicago is finding a truck to do the crosstown dray. It can take days of waiting until a driver is available because of strong demand. But detention and per-diem fees apply when containers aren’t retrieved quickly enough. Railroads want to prevent their terminals from becoming de facto storage yards, but IMCs complain that Class I railroads exacerbate the truck shortage in Chicago and then make money off the problem.

Free time, detention, and per-diem fines vary by Class I and by customer, but in general are $75 to $150 per day, escalating the longer a container is unretrieved.

“We’ve been waiting three days or more for crosstowns, although it’s starting to ease up a little bit now. But we’ve got to get a drayman to immediately pull the container off the ramp or we are charged per diem. When the railroad is doing it, they don’t charge themselves for storage, but they charge us,” said a vice president at a Mid-South intermodal company.

This source believes that much of the EMPU business interchanging in Chicago was transferred via draymen rather than flatcars, so it’s an issue of shifting responsibility more than sapping available capacity.

“The railroads were getting so far behind on finding trucks for crosstowns, but it was their responsibility. Now that it’s our responsibility, the storage and per diem rules are in play. When we face the delays like they were, we are double hit for the crosstown and the per diem,” the source said.

Eventually those extra costs trickle down to the shipper.

Mike Burton, CEO of C&K Trucking, said that the CSX effect in Chicago has not been as dramatic as he anticipated. His trucking company works with all the major Class Is and more than half of its business is crosstown moves between rail yards. He thought crosstown traffic would skyrocket after the CSX change in September, but he said the number of direct customers approaching his company for drayage was more than offset by lower-than-anticipated CSX volumes in the peak season.

Part of his observation, however, might be attributed to another shift CSX announced in which several interchanges done in Chicago for destinations in the US Southeast now are done in Memphis. Some shippers may have also shifted volumes to EMPU in September, an option that will go away.

The numbers show CSX’s volume growth was mediocre. In the seven weeks between October and last full workweek before Thanksgiving, intermodal volume declined three times, according to data filed with the American Association of Railroards. Of the four weeks with growth, only once was the rate more than 2 percent higher the same week of 2017. Over the seven weeks, in total, CSX's volume rose only 0.6 percent year over year.

It remains unclear, Burton said, how the UP-NS announcement will change the amount of direct-from-shipper solicitations his company receives and whether it will increase the total volume C&K Trucking hauls in an average week.

Which domestic lanes are being slashed

From west to east, more than 180 origin-and-destination pairs will be eliminated in 20 different markets. There will be 17 routes closed from Tucson, Arizona, 16 from Denver and Sparks, Nevada, and 15 from Tacoma, Washington. In Texas, services from Dallas, Houston, Laredo, San Antonio, and Rio Valley will experience service cuts.

East to west, nearly 250 pairs will cease, including all service originating in St. Louis. It’s the Steel City — Pittsburgh — that will experience the most impact. In total, 22 destinations will be shuttered to Texas, Colorado, Utah, Nevada, California, Washington, and even Mexico. There will also be 22 routes slashed from Greensboro, North Carolina. In the Southeast, the cities of Charlotte and Atlanta will lose 17 routes and Jacksonville will lose 16. In the Midwest, Columbus, Ohio, will also see 16 routes eliminated to the Southwest, Pacific Northwest, and Rockies.

Which international lanes are being slashed

From west to east, 75 origin-and-destination pairs will be slashed from 13 locations. From Los Angeles and Long Beach interline service will cease to Boston; Charlotte; Jacksonville and Miami, Florida; Norfolk, Virginia; Pittsburgh; and Savannah, Georgia.

The impact should be minimal, however, since there are other ports closer to these East Coast destinations than Southern California.

An import destined for Savannah, for example, can discharge in the Garden City Terminal. Exports going to these cities are unlikely to be originating from the West Coast unless the destination is Europe or the Caribbean.

East to west, only 20 routes will be canceled. Eight will be from the Boston area to Seattle, and Northern and Southern California. Exporters would have other options, however, than the West Coast, including Asian services on the East Coast.

Importers in the Rockies will lose interline access from the Port of Virginia and Port Elizabeth, but if the contents were from Asia, then it probably discharges on the West Coast.

There are very few options on the table for a shipper using one of these lanes. If the freight is exiting Florida or Texas, long-haul truckload can be a good option because rates tend to be cheaper out of those states than others.

For imports and exports, cargo owners might want to consult with their freight forwarders or non-vessel-operating common carriers (NVOs) to determine whether it would make sense to use another port. If an interchange is absolutely necessary in Chicago, shippers can team up with a logistics provider to see whether they can guarantee volumes to a trucking company.

Trucking companies will give preferential treatment to customers providing frequent and predictable volume rather than one-off transactions that fluctuate by the week.

Fortunately, these decisions will be effective in January and February. Barring a repeat of 2018, which was due in part to the electronic logging device mandate’s start, poor rail service, and bunching, there should be a few months to ease into a new routine before capacity becomes tight.