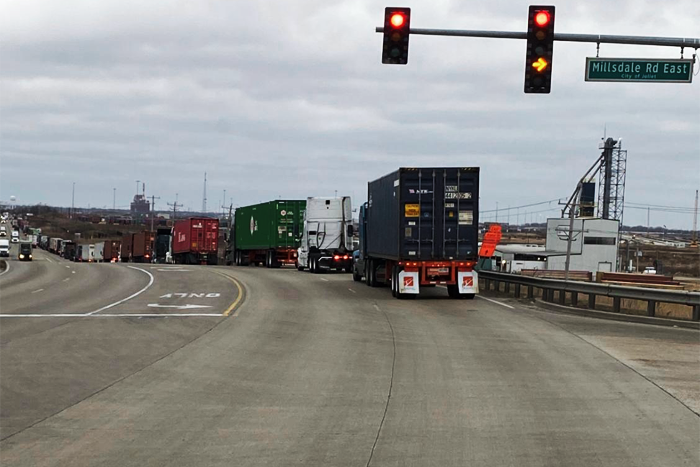 A software glitch has crippled Union Pacific Railroad’s gates at an intermodal terminal near Chicago since Thanksgiving, causing significant delays in freight deliveries. Truckers have photographed lines backed up for miles at the Global IV terminal and say turn times have jumped to up to five hours.

The delays mean drivers have been unable to complete as many jobs within their on-duty hours, forcing other deliveries to be bumped an additional day. Shippers subject to delays also risk incurring a detention penalty on their invoices.

The software malfunction has rendered UP’s kiosks at the terminal inoperable, forcing drivers to seek assistance to manually provide container information to lift the gate arms.

“On Dec. 30, I had drivers spending five hours just to get in and out of G4. Just bobtailing to pick up a container. Five hours. The line was backed up to the Home Depot distribution center,” said Dominic Pacella, vice president of Cushing Transportation. The Home Depot facility is three miles away. 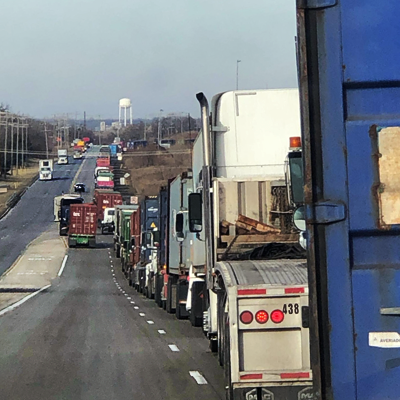 UP has been troubleshooting the software problems with Remprex, which provides technical support; Nascent Technology, which built the software; and Pacific Rail Services (PacRail), which operates the terminal.

“We are still processing traffic through our gates; however, there have been some sporadic slowdowns. We have made some adjustments to improve processing times, such as issuing manual tickets through the gate,” a company spokesperson said in a statement to JOC.com. “We understand the slowdown is frustrating and we apologize to the impacted drivers. This is a high priority, and we are working to resolve the issue.”

Kyle Bauer, a dispatch manager with Horizon Freight System, said the problem has been ongoing for 30 to 45 days.

“I’ve been hearing from our drivers at least 20 out of the last 30 days. Normally it might be once or twice a month,” Bauer added.

A source close to the situation said because the software issue is popping up sporadically, isolating the root cause has been elusive.

When viewed over a full month, official turn time data from the Illinois Trucking Association for December shows average turn times at UP’s Global IV terminal increased just seven minutes — to 38 minutes from 31 minutes in November. But that doesn’t tell the whole story, acknowledged Geostamp, the company that captures and calculates the numbers. Three of the worst days of December, the 18th, 19th, and 30th, were far worse than the monthly average.

Walker Banks, general manager of Geostamp, said the turn time data likely underestimates the severity of the situation being described for two reasons. First, the methodology used to calculate turn times takes into account the number of complete trips, which are higher under normal conditions and lower when there is heavy congestion. So, while the average trip is longer, there are fewer trucks being counted in the day.

Second, Geostamp only measures completed trips. Drivers who give up after a long wait aren’t counted at all. If a driver leaves before completing the job, the trip is not recorded. Jose Rios, operations manager with Fore Transportation, said that happens quite often.

“I don’t want to have a driver be in violation of his hours, so if I have to, I will switch him to another job and send in someone else that night or the next day,” Rios told JOC.com. So the original trip would not be included in the turn time data, even if the driver was in line for five hours.

Rios said shippers have been relatively understanding about the delays when informed their container will be delivered late. “We send them photos to show them what’s going on,” he said. “And it’s not just us. Everyone going to G4 has been experiencing the same thing, so the customers have been understanding.”

Pacella said he’s been posting pictures online showing a queue of trucks nearly two miles from the terminal “to raise awareness of the problem.” While he believes the visual evidence is resonating with shippers, Pacella and other observers say a lack of adequate staff to assist drivers when the software malfunctions is contributing to the delays.