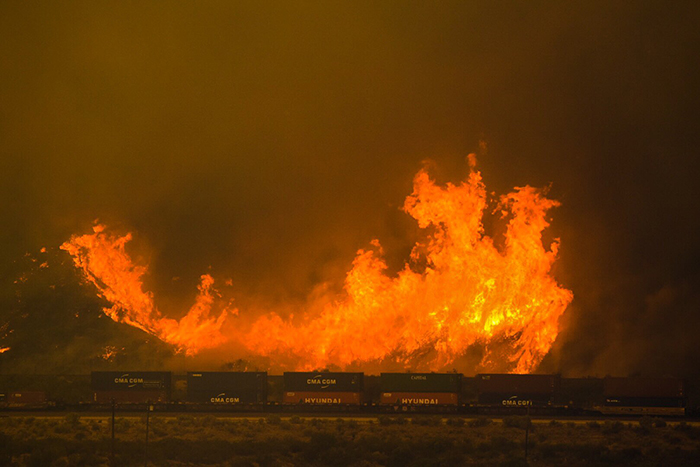 A train is seen with the Blue Cut fire in background at the height of the blaze that disrupted road and rail traffic from the largest U.S. port complex. Credit: @crimeshutterbug

Truck and intermodal rail traffic in Southern California are back to normal after wildfires in San Bernardino County disrupted commercial and vehicular traffic for five days last week. Cargo-handling at the Los Angeles-Long Beach port complex had not been impacted by the fire.

A Union Pacific track that had been closed last week reopened at 10 a.m. Saturday after bridge repair work. “The work crews did a phenomenal job on the bridge,” said UP spokesman Justin Jacobs. The backlog of rail traffic was cleared in less than 48 hours once the bridge reopened, he said.

Drayage companies in Los Angeles-Long Beach likewise experienced no significant issues because they were able to navigate around the closed areas, said Weston LaBar, executive director of the Harbor Trucking Association. Some HTA members reported equipment dislocations, but those problems were addressed, he said.

Residents in the region east of Los Angeles were returning to their properties. “All evacuation orders have been lifted,” Miller said.