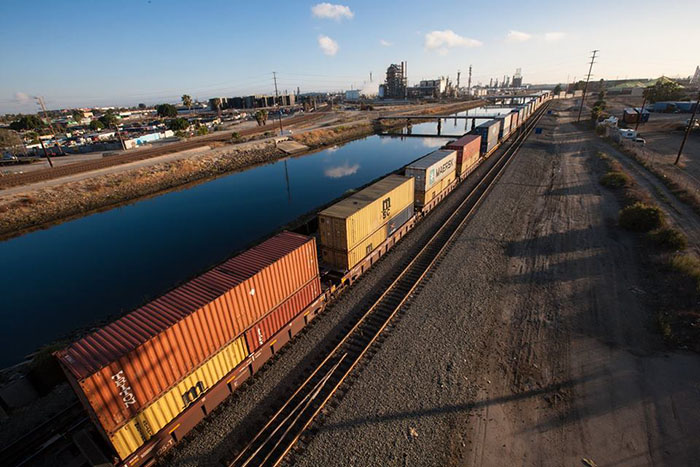 The majority of Class I railroads have said they will continue to load containers on trains whether or not they are accompanied by certified weights come July 1, when the new International Maritime Organization's container weight regulations take effect.

That decision begs the question: what will U.S. marine terminals that refuse to handle containers without an accompanying verified gross mass, or VGM, plan to do with those boxes when they arrive at on-dock rail facilities come July 1? According to a list released by a major ocean container line, 14 out of 27 marine terminals the carrier serves won't allow containers from rail to enter their facility sans VGM.

“The rails have taken a hands-off attitude when it comes to SOLAS, which, after all, is a maritime issue,” Larry Gross, a senior transportation analyst at FTR Associates, told JOC.com Tuesday.

The Class I rail industry has long been silent on whether individual railroads would accept containers without their VGM documentation. Now, five of the seven Class I railroads have told JOC.com they plan to continue to load containers and interchange with marine terminals under standard procedures come July 1.

She said CSX is communicating with its customers to ensure they understand the expectations that they’ll be able to meet the SOLAS requirements, including providing VGM paperwork, but the railway is not a party to the IMO’s SOLAS amendment and will therefore continue to operate under current best practices.

"We believe this is a concern between the shipper/beneficial cargo owner, the ocean carrier and the ports, and the required information should be handled through those parties," Susan Terpay, a spokeswoman for Norfolk Southern Railway, told JOC.com Wednesday.

“The VGM requirement is an issue between the shipper and ocean carriers,” agreed Doniele Carlson, spokeswoman for Kansas City Southern Railway.

Both Carlson and Terpay said their respective railroads will continue to accept shipments at terminals as long as the ocean carrier billing the freight complies with the existing intermodal waybill data element requirements. To date, intermodal waybills alone have required container weights but not certified VGM weights.

North of the border, Canadian Pacific Railway said the same as its U.S. counterparts.

“CP plans to continue to accept these shipments and operate under the governing transportation acts and expects the shippers to do the same with respect to the provision of shipment weights,” the company told JOC.com.

BNSF Railway, one of the first railways to publicly respond on the matter, has also maintained that only shippers and ocean carriers are party to the SOLAS amendment.

“The verification of the gross mass as provided on the ocean bill of lading is the shipper’s responsibility to provide the marine terminal operator,” BNSF spokeswoman Amy Casas told JOC.com back in Februrary.

Casas has said the railway plans to work closely with carrier partners and shippers to move freight as efficiently and effectively as possible as the industry works through the implementation of this new weight verification requirement.

Only Canadian National Railway and Union Pacific Railroad did not respond to JOC.com inquiries on the matter.

The Class I rail industry’s position on SOLAS compliance raises new questions about the fate of containers that lack VGM documentation when they arrive at on-dock rail facilities.

As Donovan Murray, manager port operation services with the Maryland Port Administration, told attendees at the North East Association of Rail Shippers’ conference in Baltimore last Wednesday: “We don't have a standard policy across all the ports in the U.S.”

At the Port of Baltimore’s Ports America Chesapeake terminal, terminal operators already plan to have space and procedures for containers that do not arrive with VGM documentation.

“If you don't produce the VGM ahead of time, we will weigh it for a fee,” Murray told the Baltimore crowd.

It’s unclear, however, how other terminals will tackle the matter. What is certain is that that determination is up to each individual terminal and there will be no set rule for U.S. shippers, said John Cushing, president of PierPass, the nonprofit company created by marine terminal operators at the ports of Los Angeles and Long Beach in 2005 to address multi-terminal issues.

More than a dozen of the marine terminal operators at the Los Angeles-Long Beach port complex have resolutely said they will not offer weighing services to support implementation of a global container weight rule. Several of those terminals have instituted a “no doc, no gate” policy, whereby no container without a VGM is to be allowed on a terminal.

Even how boxes are turned away or stored or eventually weighed and stowed will differ terminal by terminal, Cushing said. Many terminals haven’t publicly announced what they plan to do.