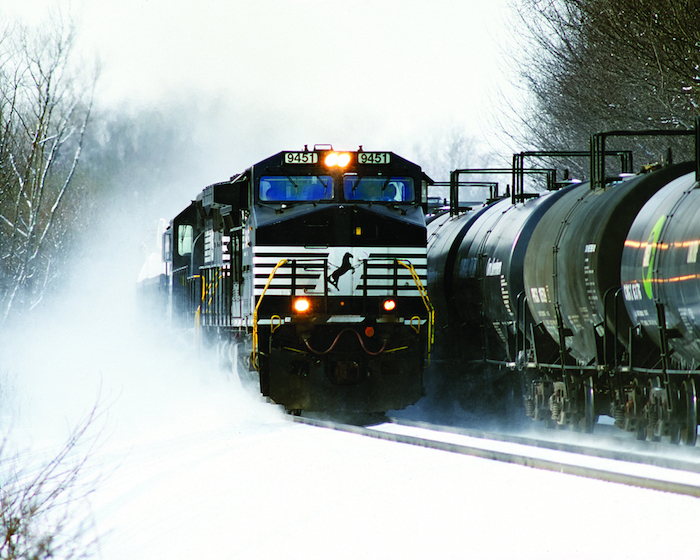 Railroads and trucking companies said shipping delays would be unavoidable Tuesday in the wake of severe winter weather that dropped as much as 2 feet of snow in some corners of the Northeast.

Norfolk Southern Railway and CSX Transportation, which together have a duopoly over all east-west freight rail traffic east of the Mississippi River, warned customers rail shipments could be held up for days until tracks are cleared and weather conditions improved.

In locations where extreme snow or ice conditions exist, both railroads said some local services may be curtailed.

Trucking companies across the Northeast closed terminals, secured equipment and tried to get drivers home before the storm hit Jan. 26. Widespread road closures and blanket travel bans imposed that evening made deliveries impossible in some states — and consignees were closed in any case.

“We did catch a break at some locations, with no snow in Virginia and little in Baltimore,” he said. “Even New Jersey was a near miss.” However, travel restrictions in some areas kept trucks off the road until Tuesday morning. “Essentially, northern New Jersey is shut down,” he said.

That includes the Port of Newark, where NEMF is based and transloads containerized shipments into LTL trailers. Marine terminals at the Port of New York and New Jersey are closed and will reopen Jan. 28, Terminals will reopen at 8 a.m., except for GCT Bayonne, which will open at 6 a.m.,  the port authority said in a statement. “Truckers should plan accordingly and not queue in the early morning hours and stagger their arrival in the morning to help limit potential congestion.”

Williston, Vermont-based LTL carrier Land Air Express of New England suspended line-haul service between terminals Monday night, Jan. 26, allowing limited line-haul service in New York state. “We forecast limited operations in Western and Central New York as well as Northern Vermont for Tuesday,” the company said on its website. “many of our terminals will not be open on Tuesday. … Delayed transit times for your shipment should be expected.”

As a northeastern trucking company, NEMF knows snow. The carrier, which operates from Maine to Virginia and as far west as Ohio and Chicago, keeps snow removal equipment at all of its terminals. Even when roads are closed, “we’re plowing out terminals,” Connery said.

In fact, NEMF and other carriers operating in snow-bound New England will be ready to pickup and deliver freight long before many customers are ready to receive shipments.

“The customer has to be dug out to receive a delivery,” Connery said. “They don’t always have the snow removal equipment,” but have to wait for local city or town plows.

“I expect we won’t crank up a full pickup and delivery operation in New England until Thursday,” he said. “We’ll probably start making pickups before noon.” Elsewhere in the Elizabeth, New Jersey-based carrier’s network, it’s business as usual, he said.

New England trucking operators have to operate “hardened” distribution networks that help them keep freight moving despite frequent winter storms and frigid temperatures. Carriers such as NEMF not only keep snow plows but power generators at hand. That’s a lesson NEMF learned from Hurricane Sandy, Connery said. “We’ve come up with contingency plans. We’ve also identified places where we could move equipment if there is flooding.”

The Port Authority of New York and New Jersey announced Tuesday that it would be reopening marine terminals to traffic Wednesday morning, after closing early Monday. GCT Bayonne will be the first to open at 6 a.m. Wednesday. All other terminals will reopen at 8 a.m.

Although terminals will be open, how much traffic they will see is still to be determined with both trucking companies and railroads reporting day-long delays on road and on rail.