NS focusing on intermodal efficiencies rather than chasing freight

NS focusing on intermodal efficiencies rather than chasing freight 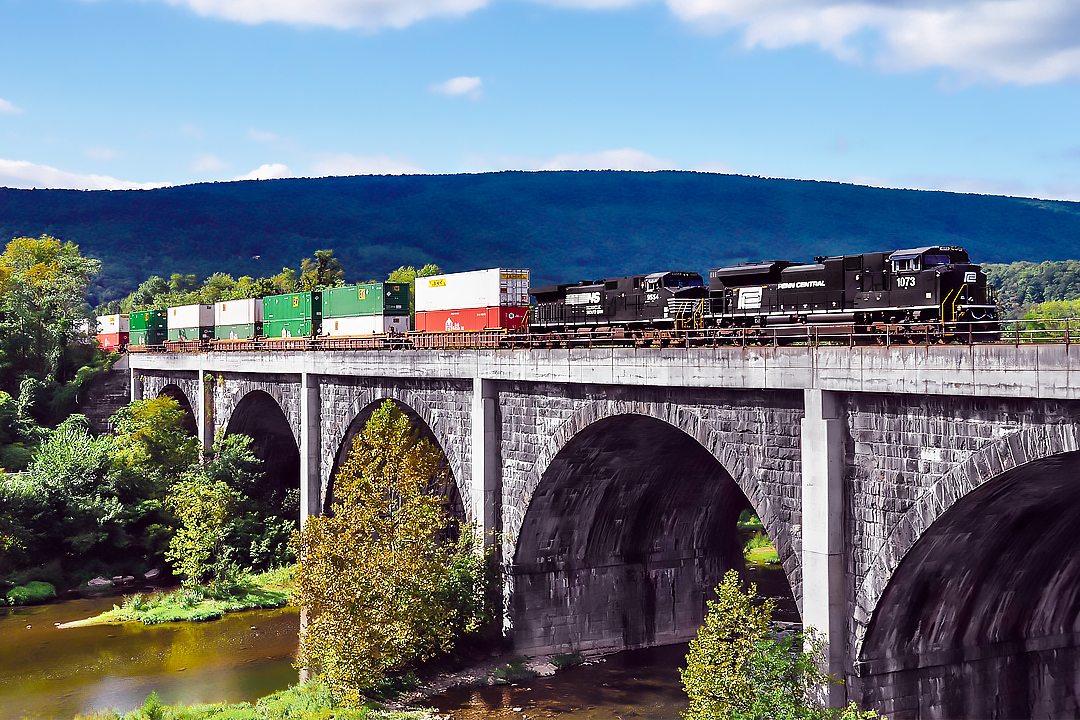 Norfolk Southern's intermodal volume in the last four weeks has been the weakest start to a second quarter since 2011, according to AAR data. Photo credit: Norfolk Southern Railway.

Rather than chase domestic intermodal freight by lowering rates, Norfolk Southern Railways will instead use the pandemic-fueled recession to make its services more efficient by eliminating unnecessary locomotives and yards, and by mixing containers with bulk cargo on trains.

That focus on efficiency gains is designed to win back business in quick order once the economy recovers, while Norfolk Southern is content to let truck brokers provide steep bargains to cost-conscious shippers.

“It’s important for us to maintain our vision as we’re approaching the market and not chase the spot truck market [down],” Mark George, NS’s chief financial officer, said on an earnings call Wednesday. “That’s not within the long-term best interests of our corporation.”

It’s a difficult position because railroads have suffered their weakest April in more than a decade in terms of intermodal volume, as small truckload carriers haul freight for unprofitable rates to remain afloat and survive.

Intermodal volume in North America has plunged 17.4 percent over the past four weeks compared with the same period in 2019, according to data from the Association of American Railroads, the worst four-week period in a decade. NS has fared the worst, with intermodal volume plummeting 23 percent year over year since Week 14 began on March 30. Union Pacific Railroad and Kansas City Southern Railway have also seen year-over-year declines of more than 20 percent since the beginning of April.

CSX Transportation, the other East Coast US Class I railroad, has suffered a 14 percent decline in intermodal volume. For the year through last week, NS’s volume was down 16.2 percent in all commodity groups, and off 14.4 percent in intermodal. By comparison, CSX’s was down 6.6 percent and 3.6 percent in the same categories.

Alan Shaw, NS’s chief marketing officer, blamed the volume declines on plunging demand for crude oil and coal, collapsing spot trucking rates, and lower imports from Asia. A year ago, NS had a particularly strong first quarter because of cargo that was shipped to beat US tariffs on Chinese imports that were due to go into effect at the start of 2019.

“We are very confident in our ability to price to the value of our product and the value of our franchise, and to make the best long-term decision for our shareholders,” Shaw said, pointing to how revenue per intermodal unit was up 2 percent in the first quarter, which demonstrates how NS raised rates on shippers.

By comparison, CSX’s revenue per intermodal unit fell 2 percent year over year. The different pricing strategies are consistent with the position of intermodal marketing companies in February.

Focusing on innovation instead

Similar to other railroads, part of the reaction to the recession is addressing excessive locomotives. NS announced the disposal of approximately 300 locomotives and designated 400 others as being up for sale.

“It has resulted in the decongestion of our yards, allowing cars to turn quicker in the terminals and trains to move faster in the network,” said Mike Wheeler, NS’s chief operating officer. After modeling out the locomotive needs if demand returned to 2018 levels, he said NS identified 703 locomotives as unnecessary out of a total fleet of 3,900 units.

Blending trains is another strategy that involves intermodal. Instead of a shorter intermodal train during a recession, or an automotive train with fewer finished cars, longer trains can be built with a mixture of containers, cars, coal, grain, and other commodities.

Wheeler and Shaw explained how blending can help provide intermodal service in shorter lanes that didn’t make sense before because containers ride with other commodities moving in the same direction.

Rail yards could also be closed, another cost-cutting measure after a careful examination to “test what we can live without,” Wheeler said.

Although he didn’t provide details on consolidation plans, NS’s TOP21 plan and UP’s Unified 2020 plan both prioritize precision schedule railroading, so the Western railroad could be a guidepost of what we may see from NS later this year.

UP last week said additional consolidation will occur later this year in Chicago, going from six terminals as recently as 2018 to three terminals. UP also closed an intermodal terminal last year in Rochelle, Illinois.