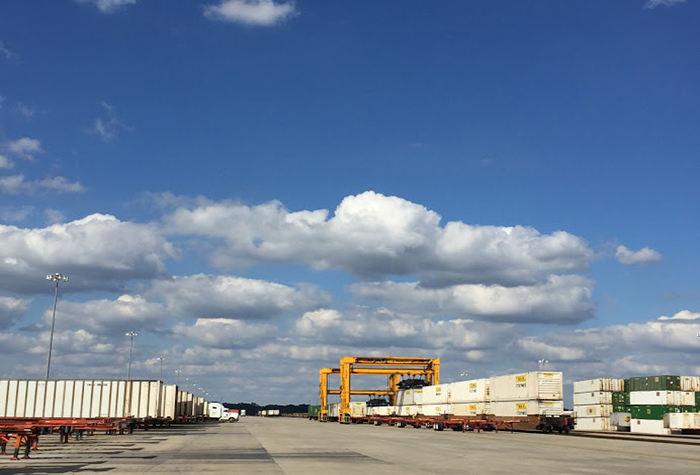 MEMPHIS — There isn’t much to Rossville, Tennessee, in the far eastern reaches of metropolitan Memphis: rolling farmland, stretches of highway and a Norfolk Southern Railway terminal.

But, it’s the three-year-old intermodal terminal that’s the first sign things in Rossville will soon be changing, NS executives say. A slew of distribution centers are now moving out of the Memphis area and into northern Mississippi.

The rail terminal in Rossville near the state line, at the confluence of a bustling Tennessee State Route 385 and a nearly completed Interstate 269, stands to reap the benefits of running ahead of that pack.

“The idea was to locate the facility not where the business is and was, but where it will be,” said Shawn Tureman, director of domestic intermodal marketing at NS, on a recent tour of the railway’s Rossville terminal.

There may not be much to Rossville, Tureman said, but that’s what makes it so attractive. There’s room to grow. The terminal was designed with capacity for 200,000 lifts, “but it has the ability to be expanded well beyond that,” he said. “The footprint that we have is more than 200 acres for the property. We’ve only developed about half of that.”

“This is where the future is,” Tureman said, indicating the sprawling flatness of the Rossville operation and surrounding countryside.

The current 571-acre facility completed 123,490 lifts last year, a roughly 16 percent year-over-year increase. On average, the 24/7 operation sees 14 trains and 607 trucks in and out every week. And the terminal’s automatic gate system means drivers are in and out in 30 minutes or less, according to NS.

The terminal has been feeling some heat recently, though, and not just from the blistering West Tennessee summer. Highway-to-rail conversions have been slowing industry-wide this year and, as a result, volume growth has slowed at rail terminals like the one in Rossville.

“Growth has decelerated and I think part of that is decreasing fuel prices,” Tureman said. “When that happens, when fuel prices lower, the advantages of rail compress and become closer to truck.”

Total NS intermodal volume grew 2 percent in the second quarter year-over-year, down from 5 percent growth in the previous quarter and 6 percent in the quarter prior to that.

The headwinds are undeniable, but NS executives have said they are confident the tide will turn, tightening capacity and new federal regulations will hit the trucking sector, conversions will pick up the pace and the railway will win back whatever market share it has lost to over-the-road competitors.

That push is being helped by an increased interest in the intermodal sector. Carload dominates the railroad industry, but recent shifts in the energy market have taken a chunk out of NS’ coal-heavy carload business. Coupled with an organic increase in intermodal volumes, the intermodal sector is playing a more and more significant role in NS business, Tureman said.

In the ‘90s, when he first joined NS, Tureman said intermodal made up only 9 percent of the company’s revenue. Today, it makes up 22 percent.

“Put it in perspective, our domestic intermodal franchise has grown about 600,000 units. It’s a compound annual growth rate of a little less than 10 percent a year. When you think about that, that’s 100,000 to 200,000 units of growth,” Tureman said.

NS sees enormous potential, he said, not only in intermodal, but in Rossville. The Rossville terminal itself, not just the rural community outside of Memphis, has become an attractive asset to distribution centers who are moving to the Rossville area.

Tureman calls Rossville a “crown jewel” of sorts for NS's Crescent Corridor, a more than a $2.5 billion rail infrastructure project spanning 11 states bridging the Southeast and Northeast to the Southwest, with connections linking to Los Angeles and Mexico.

Rossville has served as a pilot for similar greenfield operations that have opened up in the past five years in the Crescent Corridor including new operations in Charlotte, North Carolina; Birmingham, Alabama, and Greencastle, Pennsylvania.

“That’s four facilities, each one of them is about $100 million a pop, which are built specifically to tap into and help us capture over-the-road market share,” Tureman said. “It’s one of the key facilities to how we take freight off the highway.”