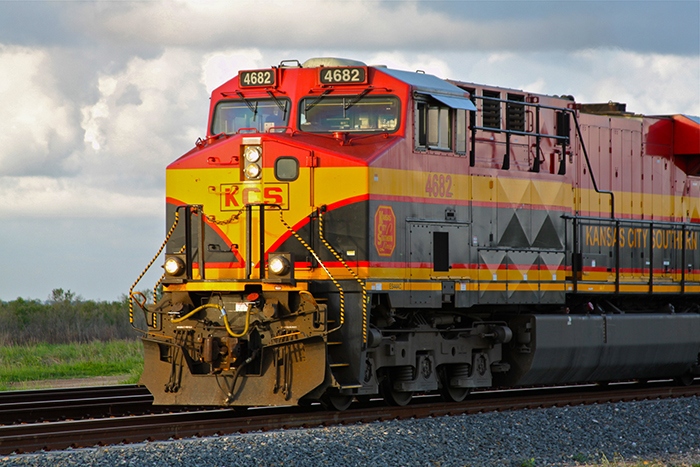 Kansas City Southern Railway says it remains “cautious” heading into 2016, after a soft market contributed to a rocky 2015 and promises to do the same in the new year.

With the energy and carload sector still struggling, intermodal will be a primary component in the railway’s long-term growth strategy, the company said. Shippers can expect increased investment in that sector in 2016, according to a joint statement from KCS CEO David L. Starling and President Patrick J. Ottensmeyer.

“We expect continued volatility in oil and natural gas pricing, which means our energy business, just like our peers’ businesses, will again be difficult to predict,” Starling and Ottensmeyer said. “The strong U.S. dollar will make American exports more expensive and less attractive to other global producers, which may impact many of the products we move.”

The executives at the Kansas City, Missouri-based railroad have owed year-over-year losses and volume deceleration in 2015 more to that strong U.S. dollar and low fuel prices than to slowing intermodal traffic or a total decrease in carloadings.

The railroad announces its fourth quarter and year-end earnings results Jan. 22. But for the past several quarters, the railroad, which operates primarily in the Midwest and Mexico, has been reporting weaker results as the peso has depreciated and the energy segment has softened, offsetting once-strong chemical and intermodal revenues.

A number of chemical and petroleum, industrial and consumer products as well as energy commodity volumes fell year-over-year in the third quarter. Utility coal volumes fell as much as 19 percent.

KCS intermodal volumes, meanwhile, fell 6 percent year-over-year in the third quarter, after growth slowed considerably in the quarters prior. Volume growth had fallen to just 2 percent in the second quarter of 2015 reversing a trend where volumes were up 4 percent the quarter before and 8 percent the quarter prior to that.

The KCS network as a whole was plagued with subpar service in 2015, something executives have said is turning the corner.

“In the cross-border market, competition from other railroads and the trucking industry, combined with service challenges in early 2015, caused cargo to migrate to other routes and modes,” Starling and Ottensmeyer said.

According to the two executives, service recovered northbound in the second half of the year, but work is ongoing to improve consistency in both service and capacity southbound to cater to customers’ need for container positioning into Mexico, including the southbound flow of auto parts and other time-sensitive commodities.

U.S. domestic volume was also hampered by poor service in early 2015, they said.

“While service has returned, volume is lower than anticipated in a somewhat depressed market,” the men said.

With its new Wylie Intermodal Terminal that opened outside Dallas, Texas in July, they said they believe KCS will be able to grow unhindered while cooperating with interchange partners. Wylie’s first phase will offer an annual lift capacity of 342,000 twenty-foot-equivalent units, more than 50 percent the capacity of KCS’s neighboring terminal in Zacha, which has an annual intermodal lift capacity of 168,000 TEUs and will now be used for transloading and automotive operations.

The plan is for Wylie to not only help handle anticipated growth in intermodal conversion in the Dallas area, but strengthen the railroad’s networks serving Mexico and the U.S. Southeast, the company has said.

South of the border, in Mexico, the KCS network struggled with a number of disruptions in 2015 caused by “outside factors,” as well as some capacity constraints and lingering crew shortages that hampered the efficient flow of rail cars and saw some cargo was diverted to truck.

“Despite these challenges, we will proceed with many of the planned strategic capital expenditures that will drive our longer term growth in areas such as plastics, automotive and intermodal,” Starling and Ottensmeyer said.

KCS has said its less-than-par intermodal service is already improving after the railroad implemented strategic initiatives to manage costs, undertake planned maintenance, improve our infrastructure and expand our capacity in 2015.

Highlights of KCS’s 2016 planned investments include the installation of 40,000 ties and 20 track-miles of rail between Beaumont, Texas and Dequincy, Louisiana, completing a three-year program for track upgrades over this rail segment; installation of 132,000 ties on the line from Kansas City. to East St. Louis, Illinois; installation of 76,000 ties and five track-miles of rail in the areas of Artesia, Columbus and Aberdeen, Mississippi; continued annual tie cycle programs from Kansas City to Pittsburg, Kansas, from Laredo to Corpus Christi, Texas and from Baton Rouge to New Orleans; as well as the replacement of 38 miles of curved rail and other priority rail areas across the system.

“With the continued cross-functional focus on building capacity and designing train schedules that offer the consistency and predictability intermodal customers require, next year will be a challenge,” Starling and Ottensmeyer said. The executives noted, however, it also remains “ripe with opportunity.”