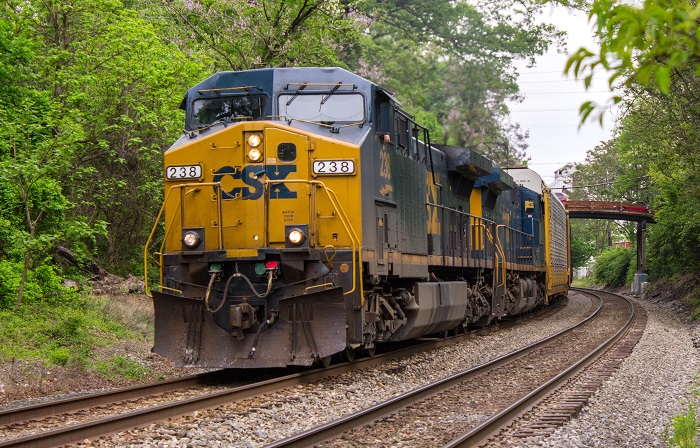 Ultimately, CSX consolidated all interline freight using a steel-wheel interchange in Chicago to North Baltimore routings as of last month. If shippers want a delivery to Cincinnati, Columbus, or Cleveland, Ohio, then they must book a crosstown dray to CSX’s 59th Street terminal or Bedford Park facility. Photo credit: Shutterstock.com

CSX Transportation is doubling down on its commitment to drive freight through North Baltimore, Ohio, with announcements that it will offer service from Los Angeles through BNSF Railway as of Oct. 29 and also partner to construct a logistics park adjacent to the railyard.

It’s the latest move in a shifting vision at CSX for the terminal, which the railroad hopes to make a central hub for Ohio freight but also includes logistical challenges for shippers and truckers. The hub was originally built to divert cargo away from often-congested Chicago, but the plan changed when then CEO E. Hunter Harrison took over in April 2017 and sought to streamline the network by moving away from the hub-and-spoke model.

Ultimately, CSX consolidated Ohio-bound interline freight using a steel-wheel interchange in Chicago to North Baltimore routings as of last month. If shippers want deliveries into Cincinnati, Columbus, or Cleveland, Ohio, then they must book a crosstown dray to CSX’s 59th Street terminal or Bedford Park facility.

Owner-operators don’t typically like hauling containers from the rural town unless they are well compensated because it is nearly four hours from Cincinnati, Columbus, and Cleveland, a round trip that is difficult to complete in one day under hours-of-service regulations. Those who serve North Baltimore prefer to work within 50 miles, not the 200 mile-plus hauls to the three Ohio cities.

“To Findlay, Ohio, just about 20 miles away, it will cost you about $200. From North Baltimore to Detroit is $400 to $475. It’s pretty similar to the other cities as well. You’re paying $2 per mile for a round trip. Add on fuel and it’ll be about $550,” said Jason Hilsenbeck, founder of LoadMatch and Drayage.com, an online intermodal directory and container-matching service.

Owens was flooded with requests in August to haul from North Baltimore to Detroit and the three Ohio cities. But he is reluctant to offer quotes because drivers make more money on local jobs.

“[In June], if you called me about a North Baltimore move to Cleveland, I would’ve charged $400 plus fuel. Today, we are going to rate it as you’re purchasing the truck for an entire day. That’s the only way I can sell it to drivers,” Owens said in August. “Once you get outside of 50 miles of North Baltimore, the prices shoot up exponentially.”

On this piece of news, Owens believes the main beneficiaries will be asset-based intermodal providers rather than trucking companies operating under an owner-operator model.

“My first thought goes to equipment. The BNSF [route] seems to be more for the asset carriers like J.B. Hunt [or] Schneider, with COFC Logistics being the largest private container owner,” he told JOC.com. J.B. Hunt Transportation Services and Schneider National are the primary intermediaries to BNSF.

CSX believes in North Baltimore, however, calling it a “strategically located terminal for growth and strengthen[ing] CSX’s value offering to the Ohio Valley.”

“CSX’s Northwest Ohio Intermodal Terminal is ideally situated on CSX’s main line network 30 miles south of Toledo on Interstate 75 and is surrounded by a population of nearly 30 million within a 200-mile radius. We are excited to transform Northwest Ohio into a regional demand point that provides attractive solutions for customers and supply chain needs,” CSX CEO Jim Foote said in a statement.

Shippers in Detroit, which lost domestic intermodal service via CSX last month, would more likely move freight on Norfolk Southern Railway because it can deliver into Toledo, Ohio.

BNSF will offer departures from Los Angeles to North Baltimore five days per week in each direction through interline service. Shippers can combine this new service with additional east coast port offerings from Ohio to the Port of New York and New Jersey and back. Existing UP interline services will remain in place.

NorthPoint Development will team with CSX to build a logistics park, including warehousing, distribution facilities, container yards, equipment storage, and transload facilities, on a 500-acre parcel.

A CSX spokesperson said there is enough labor available in the rural community to operate these new facilities and “the attraction of industrial development is likely to draw a workforce from around the region as well.”

“Customers have a number of options in the Ohio Valley, and we provide service alternatives in a number of key regional markets. The development at northwest Ohio introduces the opportunity to centralize regional distribution opportunities, whether from the west or the east, which may make sense for certain customers and/or shippers.  We have capacity to grow across the Ohio Valley to support key shipper needs in a heavy set of consumption markets,” the company told JOC.com.