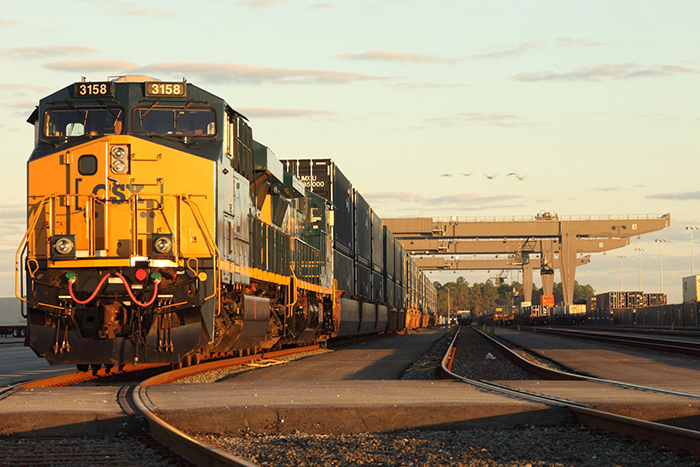 As the sun sets on some CSX contracts, service troubles may keep it from rising again for some customers.

Major service disruptions will not cost CSX Transportation much intermodal business in the short term, but unless the railroad can convince customers that the delays and missed cargo pickups will be short-lived, it risks losing volume and pricing power.

The 6.2 percent increase in CSX’s intermodal volume over the four weeks shows that although shippers are threatening to take their cargo away, they have limited avenues to use while others are not ready to bite the bullet of changing their distribution strategies. Besides, there is only so much capacity that truckers and their eastern archrival, Norfolk Southern Railway, can take on.

Container lines, such as Maersk Line and Mediterranean Shipping Co., contract with CSX for their customers in multiyear contracts, and major shippers may have more wiggle room to move cargo off the CSX network. Dealing directly with shippers, intermodal marketing companies (IMCs) handle the majority of domestic intermodal volume, moved in 53-foot containers and trailers, for CSX. IMCs have some ability to exit contracts if service suffers, but securing capacity either on trucks or on NS trains can be challenging. Container lines and IMCs will enter contract negotiations with CSX with plenty of complaints on behalf of their domestic and international shippers.

It is too soon to determine just how much intermodal volume is at risk and how concerned CSX is about the loss of some accounts, considering CEO E. Hunter Harrison’s history of letting lower-paying freight leave to improve overall margins. According to a recent Cowen & Co. survey, 80 percent of CSX customers have experienced difficulties with the railway. Of those, roughly 40 percent have switched some freight to NS, and 67 percent have transferred freight to truck.

Since March, parcel giant UPS has shifted at least some of its cargo from CSX to NS, according to people familiar with the matter. McDonald's has supplemented its regular CSX train shipments of frozen french fries into the Nashville area with truck deliveries, according to the Wall Street Journal.

Memphis-based Intermodal Cartage Group (IMCG) said it has shifted roughly a quarter of the volume moved by CSX to the NS network because of Southeast delays. US East Coast port officials are also urging CSX to improve its international rail services, following shipper complaints.

Shippers, and even some CSX employees, blame the service disruptions on Harrison’s “precision railroading” strategy, in which a railways’ fleet, workforce, and yards are thinned to cut costs, streamline operations, improve train schedules, and, ultimately, improve the company’s operating ratio, an indicator of profitability. It has worked at two other railroads in the past, Canadian National and Canadian Pacific. In the wake of cuts at CSX, however, the exact opposite appears to have occurred, and by Harrison’s own admission, mistakes have been made as he attempts to implement “precision railroading” for the first time in the United States.

According to Harrison’s own estimates, CSX already has pulled approximately 900 locomotives and could remove another 100, and shed 2,300 employees with a further downsizing of 700 possible. The railway also has shuttered or transitioned seven of its 12 hump yards since March.

Meanwhile, average intermodal train speeds at CSX have dropped roughly 10 percent year over year, down to 25.4 miles per hour the week of Aug. 12. In the same time, terminal dwell time at CSX facilities has increased from 25 to 30 hours. Meanwhile, CSX regularly operates trains at 90 percent of the speed NS trains run. Average intermodal train speeds on NS lines have remained nearly the same since this time last year, down just 2 percent year over year the week of Aug. 12 to 27.9 miles per hour. Average terminal dwell times at NS terminals have changed even less at roughly 24 hours.

RoadOne IntermodaLogistics, a nationwide drayage provider, has seen a ripple effect from the changes at CSX, which it serves across the Southeast. “It affects us when drivers are delayed at certain ramps and freight is not arriving on time,” Ken Kellaway, CEO of the Massachusetts-based company, told JOC.com. “We try to keep drivers busy, and it’s hard to move drivers to new locations if freight isn’t coming in at their ramps.”

RoadOne is doing its best to assist the railroad and its customers, Kellaway said. “We understand what they’re trying to accomplish,” he said. When freight is delayed, RoadOne feels pressure from shippers to “make up time,” but he said pressure has slackened recently. “I’m not hearing the complaints I heard a couple of weeks ago. It seems to be settling down.”

Tension between CSX and federal regulators has not settled down, though. On July 27, the Surface Transportation Board (STB), the top rail regulatory agency in the United States, wrote a letter to Harrison requesting the railroad and regulators hold a weekly service call with the regulator to address “continued concerns over the widespread degradation of rail service.”

Harrison issued an apology in a July 31 email to customers, in which he recognized service disruptions were hurting customers, pinning much of the blame on CSX employees unhappy with his leadership. “While most people at the company have embraced the new plan, unfortunately, a few have pushed back and continue to do so,” Harrison said. The CEO promised to redress shipper grievances and, to that effect, reopened one of its closed facilities, the Avon Yard in Indianapolis.

But by Aug. 16, the STB was still not satisfied with Harrison’s response and sent a second letter to the railway, now demanding a detailed schedule of CSX’s planned changes for the remainder of the year.

In the meantime, the Rail Customer Coalition, a group representing 64 shipper groups, wrote a letter to Congress telling lawmakers that Harrison’s changes had “upended the CSX network” and that “chronic service failures occurring across the CSX network are impacting the entire North American rail network.” The group said the CSX service woes had escalated to an issue of national significance, and called for an official STB investigation.

In his Aug. 18 response to the coalition, Harrison called complaints against CSX “unfounded and grossly exaggerated” and went on to allege that some members of the coalition were aware that the group had even sent a letter and did not agree with its contents.

“In the midst of our efforts, there have been some unfortunate disruptions to our service, which we are addressing aggressively,” Harrison wrote. He said he does not intend to continue any sort of dialogue with the coalition, “since coalitions do not have service issues.” Instead, Harrison said he welcomes conversations with customers on an individual basis.

Shippers have been reluctant to discuss changes to their business publicly.

“UPS considers CSX a valued partner, and we have worked with them for decades,” Dan McMackin, a UPS spokesperson, told JOC.com “We expect to continue to work collaboratively with them as we develop transportation solutions for our networks and requirements in the future.”

NS, on the other hand, has been less guarded, and Alan Shaw, its chief marketing officer, has said in no uncertain terms, "We have seen some business move over to us.”

Not every shipper is a UPS or McDonald’s with access to NS terminals or lines or the time and money to shift cargo between modes from rail to truck carriers. Nor does every shipper conduct business with an IMC like IMCG, which has business relationships with both rail carriers on the East Coast.

“The ability to swing freight may be constrained by the availability of empty rail boxes in the right place at the right time. Big private fleets typically are bound to one carrier and can’t easily switch,” Larry Gross, a senior transportation analyst at FTR Associates, told JOC.com. “For instance, Schneider National has a long-term contract with CSX.”

Since 2008, CSX has been Schneider’s primary eastern rail provider. The two renewed that contract earlier this year in March.

“We have a terrific relationship with the CSX Railroad. We believe long term the precision railroading approach is going to deliver great service on that product,” Chris Lofgren, Schneider’s president and CEO, said on a Aug. 1 earnings call.

Still, Mark Rourke, the company’s chief operating officer, did say, “We've experienced some growing pains as CSX transforms its network.” Rourke said he is confident those growing pains will subside as precision railroading is fully implemented.

But for folks like Schneider — IMCs and shippers alike — their contract does not give them much more choice other than remaining at CSX and remaining confident Harrison’s plans will bear fruit.

“It’s not a system you can arbitrarily change,” Kellaway said.