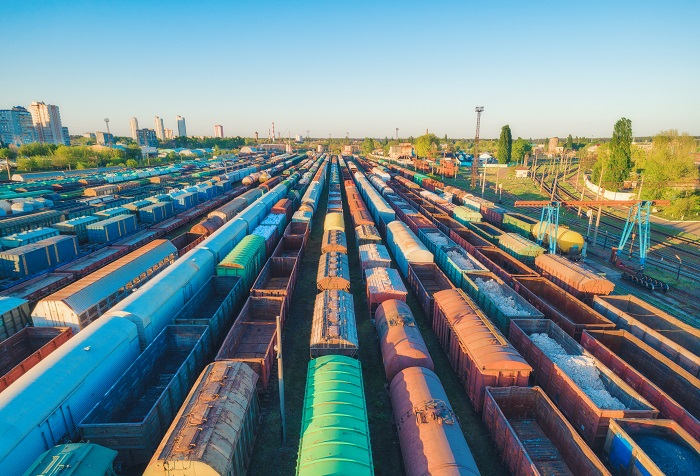 In an era in which considerable, new intermodal business is there, US railroads argue they need to balance the interests of investors and shippers. Shippers argue there hasn’t been a balance. Photo credit: Shutterstock.com.

The demand is there for Class I railroads as US shippers are desperate to locate capacity to move their freight, but many logistics providers, analysts, and cargo owners wonder why railroads are pushing away intermodal business rather than embracing it. From the railroads’ perspective, they are taking all the business they can while also cautiously balancing the need to keep investors sweet with lower operating ratios.

A series of actions over the last 12 months have left shippers to question why some railroads, to varying degrees, are providing less service and slower service when business is strong. Many shippers don’t believe railroads opened their arms even though the opportunity was there. Class I railroads have begun to lease locomotives and hired and trained conductors. But as one intermodal executive told JOC.com in April, the railroads were reactive rather than proactive to the market.

There is a sizable opportunity to be had because trucks are historically scarce. FTR Transportation Intelligence reported truck utilization is 98 percent versus 85 percent during the freight recession in 2016. FTR vice president Don Ake said he’s never seen this level of utilization before. However, trains are about two miles per hour slower than a year ago and below the five-year average, according to rail performance measures. On a 1,500 trip, a train averaging 31 miles per hour would take 48.4 hours to arrive, while a 29 mile per hour train would take 51.7 hours. For shippers and truckers, every minute counts and delays cost money.

But railroads are stuck in the middle, in many ways, between shareholders who insist on low operating ratios, higher margins, and increased profits. One bad quarter and total value of a company can drop quickly. Meanwhile, shippers insist on reliable service but also a price within their transportation budgets.

“I don't differentiate in the implementation of scheduled railroading that you ignore your customer and don't focus on growing the top line, as you implement your operational changes. You do it all at the same time,” he said. “We have been working to improve the quality of our service and work with our customers to grow our business throughout the last six months with I would say with pretty favorable results and responses from our customers. They went from  — when I showed up  — hating me to now on occasion even buying me a drink.”

Union Pacific Railroad CEO Lance Fritz highlighted the 225 graduates in July and 250 more going into the field in August and September, along with larger locomotives, to improve the experience of shippers.

“As service improves we will continue to optimize our network and adjust resources accordingly. Our goal is to generate solid productivity savings and operational efficiencies that provide an excellent service experience for our customers, while driving margin improvement,” he said on a July 19 earnings call.

Canadian National Railway hired more than 800 conductors through June and another 1,000 will be added before the end of the year. It has placed 130 leased locomotives into service and another 60 will be added this year, as well as an extensive rebuilding program. This is all evidence that they care about their shippers and customer service, CN has said.

The relationship between rail shippers and railroads has always been tenuous. The latest wave of discontent began when the late E. Hunter Harrison became CSX CEO in April 2017. He immediately flipped the network on its head by installing his precision scheduled railroading, but disruptions sent shippers to the Surface Transportation Board. Harrison apologized in an October 2017 hearing.

Winter service was substandard to Chicago, Dallas, Atlanta, and Memphis, Tennessee. Shippers complained about the fragility of the rail network. In May, CSX announced it would shutter domestic intermodal service to Detroit. This week CSX told customers it would cease interline service with UP on 197 origin and destination lanes beginning Sept. 17. This is the first step for Foote to complete the work Harrison left behind.

“Our intermodal network needs a ton of work in order to become the efficient part of our system,” Foote said on a July 17 earnings call. “We will do this very methodically, and logically, and appropriately, and do it being fully aware of the fact that we are looking at a peak season this year, which everybody is indicating to us is going to be very strong. So we're not going to do anything that's going to screw up the railroads.”

Yet Sept. 17 is in the middle of the peak season and intermodal marketing companies would have preferred this change in January. Even last year, however, CSX cut off domestic intermodal service on 327 origin and destination pairs in October.

“You see in the letters from UP and CSX ‘oh we’re going to give you such great service by doing all of this.' They forget to mention it’s point A to point B, but now we’re stuck getting the cargo to point C,” said an executive with a Mid-South logistics firm, who spoke on the condition of anonymity. “We had committed rates for a year and at the worst time, they rip it up and change everything. You think shippers appreciate the timing? No way.”

An intermodal director at a Southeast US logistics company said the service has become infinitely harder to sell as a capacity alternative.

“This decreases the incentive for us to sell the service. You’re making intermodal more complicated for us and more expensive. You’re showing us, as a customer, that you can’t make up your mind on what you want to do,” the individual said.

Few intermodal marketing companies wanted to officially discuss the topic because they fear retribution from the railroads — “blackballed” — if their company names were disclosed.

Whether the relationship turns around very much depends on results. Will new conductors, locomotives, and track work yield reliability and consistency? Will train speeds remain below 30 miles per hour? Will CSX eliminating lanes and consolidating terminals on a complex network provide unmatched service to shippers, as promised? Key questions, no answers.