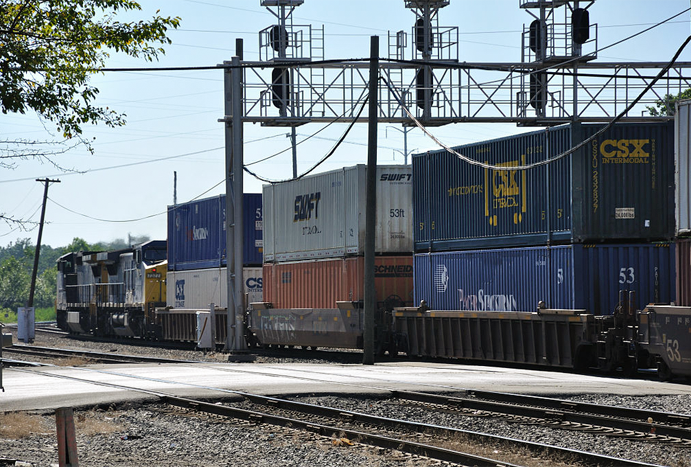 CSX Transportation and Union Pacific Railroad struggled with steep declines in intermodal volume in the third quarter, but each company is confident that improving margins show their rail networks are becoming more efficient and poised to capitalize whenever the market flips.

The results emphasize how operating ratio — the percentage of revenue consumed by operating expenses — is the metric CSX and UP are highlighting to investors. The companies won’t cave on intermodal rates and sacrifice margins to grow volume and revenue.

UP reported third quarter intermodal volume declined 11 percent to 1 million units, while revenue dropped 9 percent to $1.56 billion year over year. The results for CSX were flipped but otherwise similar. CSX’s volume was down 9 percent to 673,000 units and revenue fell 11 percent to $447 million. Both companies have seen volume and revenue fall versus 2018 levels for the entire year.

Nevertheless, CSX led its earnings call with an announcement that its 56.8 percent operating ratio was a new company record. UP opened its review of the quarter by highlighting its all-time quarterly low ratio of 59.5 percent. Both CEOs used words such as “solid” and “proud” to describe their view of the quarter, despite the intermodal declines.

The companies said the operating ratios show they are positioned to thrive when the market rebounds, and blamed current conditions on the economy and the sluggish trucking market.

Companies will remain rational on price

Maintaining price discipline, which has been popular on earnings calls in recent quarters, remains the operative phrase in the current market.

“Going forward, we will continue to price our service to the value that it represents in the marketplace, while ensuring that it generates an appropriate return,” UP CFO Rob Knight said in an earnings call Thursday.

“I think the important thing for you to hear is that we're going to maintain pricing discipline, especially as our service product is improving. And as that service product improves, we also expect that to help us grow,” said Kenny Rocker, UP’s executive vice president of marketing and sales.

The message from both companies was clear: No matter how low truck prices go or how long the trucking market continues to be lower on a year-over-year basis, CSX and UP will hold firm to rates that produce lower operating ratios even if it costs them shipments.

“We're not trying to chase market share. We're not trying to chase a market down against a loose truck [market],” UP CEO Lance Fritz said. “We'll just compete based on the service that we provide, and we will price for that. As the economy strengthens, which it will at some point, and as truck capacity tightens up, which it will at some point, we are in a great place to take advantage of that.”

Intermodal marketing companies (IMCs), though, have told JOC.com they lost business in January and February when railroads held firm on upper-single-digit rate increases. Railroads caved a bit in the spring, according to IMCs, but shippers already signed contracts for 2019 and the freight was gone.

Unlike J.B. Hunt Transport Services, which had much reason for optimism on its Oct. 15 earnings call, CSX and UP have a more cautious view of the peak season and 2020.

“Our expectations for peak are somewhat muted this year. I think we'll see a little bit of a bump, but not the traditional solid peak,” said Mark Wallace, CSX’s executive vice president of sales and marketing.

Wallace said intermodal volumes in the fourth quarter and into 2020 will be dependent on the industrial economy and whether two closely watched manufacturing benchmarks — the Purchasing Managers Index and the Industrial Production Index — show growth or contraction.

“As we enter next year, we've got momentum. If we can get, you know, a little cooperation from the economy, that would be very helpful,” Fritz said.

UBS industry analyst Tom Wadewitz probed UP on why its third quarter volume fell 11 percent while BNSF’s is projected to be down about 1.5 percent, and why the rolling four-week average for UP is down 13 percent versus about 2 percent for BNSF.

Cowen and Co.’s rail shipper surveys show BNSF with higher grades than UP on service, with BNSF scoring higher than UP among rail shippers each of the previous four quarters. BNSF’s third quarter grade was higher than the rolling five-year average while UP’s grade was lower.

Rocker didn’t provide a direct answer to Wadewitz’s queries. “The fact that the service product on the intermodal side is actually strengthening is something that we appreciate,” he said. “We've seen a lot of competition out there from both the trucking side and we compete with Western rail carriers and the North American rail carriers. So that's going to be around for us, and we'll continue to compete there.”