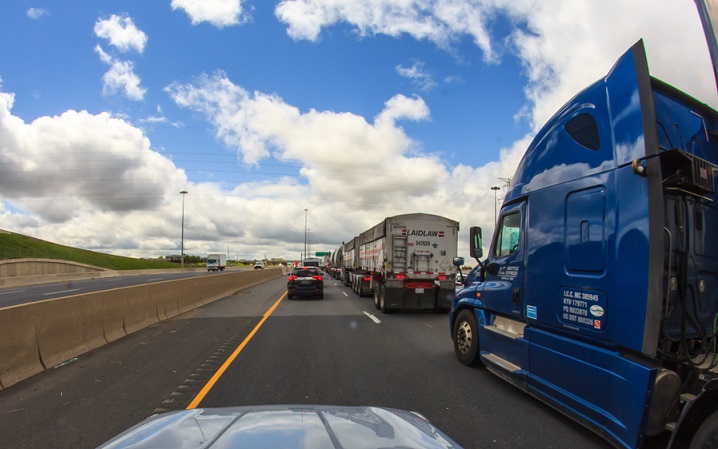 With Canada’s own ELD mandate set to take effect as soon as later this year, Canadian Pacific, the second-largest Canadian railroad, expects trucking pressure to build through 2019 and into 2020. (Above: Trucks travel on a highway near Toronto, Canada.) Photo credit: Shutterstock.com.

With Canada’s own ELD mandate set to take effect as soon as later this year, the second-largest Canadian railroad expects trucking pressure to build through 2019 and into 2020. Although the rule was published in the Canada Gazette, it’s unclear whether the law will be implemented later this year or next.

The second half of 2019, in particular, will provide “road to rail opportunities,” said John Brooks, chief marketing officer, likening it to the impact on the US market, which experienced a double-digit price increase in spot and contract truckload markets. During CP’s third quarter earnings call on Thursday, Brooks said the railroad was seeing an increase in domestic intermodal traffic, with total intermodal volume — including ocean containers — up 14 percent year over year in the third quarter, to 262,300 units.

The volume jump drove intermodal revenue up 19 percent to C$406 million (US$311 million) in the same period. The company’s net profit in the third quarter surged 22 percent to C$622 million, as revenue rose 19 percent to nearly C$1.9 billion.

The ELD rule imposed in the US in November has already affected Canadian trucking, both cross-border and domestic services. Shippers dependent on cross-border trade with the United States experienced significant disruption starting Dec. 18, when the rule requiring truckers to use ELDs rather than paper logbooks took effect. The ELD mandate is a US regulation, but its reach extends across the US border.

Cross-border freight is such a large part of Canada’s core transportation business that many trucking companies already are ELD-compliant. Their drivers must have ELDs as soon as they cross the Ambassador Bridge or any of the 78 other Canada-US truck crossing points.

The question now is how much domestic and drayage capacity, considering regional hauls will be impacted if they are 160 kilometers (99 miles) away from the port, will be taken out of the market, which is already challenged with finding skilled drivers.

How to Improve OTIF: 15 Tips for On Time and In Full Delivery
END_OF_DOCUMENT_TOKEN_TO_BE_REPLACED