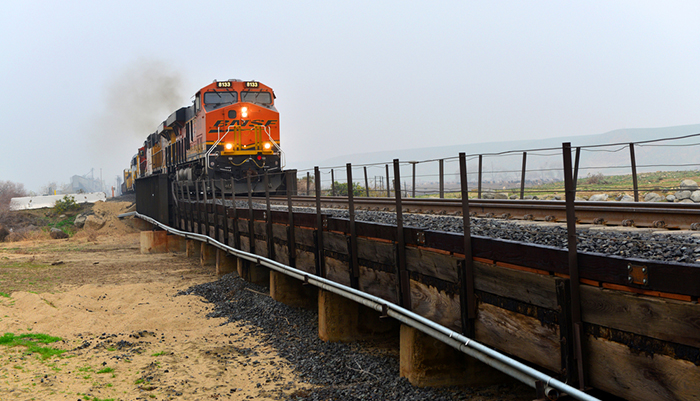 Unlike truck shipments, intermodal rail shipments moving via the new service will not have to stop at the border for customs clearance.

BNSF and KCS announced on Wednesday they plan to launch the five-days-a-week service next month connecting the Chicago and Dallas/Fort Worth markets on the BNSF network with consumer and industrial regions on the Kansas City Southern de México network south of the border. The new service, starting Dec. 1, is primed for shippers moving appliances, foods and beverages, as well as other cross-border shipments across the border.

The service offering will no doubt compete with similar offerings from UP, which, only last year, KCS acknowledged had won over market share in the competition for cross-border business. UP has also been investing hundreds of millions of dollars in its cross-border connections and adjacent facilities. UP is the only railroad serving all six major Mexico gateways: Calexico, California; Nogales, Arizona; and El Paso, Eagle Pass, and Brownsville, Texas. KCS last year noted that the railway had lost some short-haul business to that Eagle Pass operation.

Northbound, the new BNSF-KCS service will operate from Toluca, San Luis Potosí, or Monterrey, Mexico, to Dallas/Fort Worth or Chicago. Southbound, the service will originate from Chicago or Dallas/Fort Worth to Laredo, Texas, or to Monterrey, San Luis Potosí, or Toluca, Mexico. Customers using this service can also connect to the West Coast to and from Los Angeles, San Bernardino, and Stockton, California, and Seattle and Portland, Oregon, in the Pacific Northwest.

In addition, customers will have the ability to connect to other regions along BNSF’s network from Dallas/Fort Worth or Chicago as well as other railroads to reach northeastern and Canadian markets.

“These new services leverage our strong intermodal product and KCS’ expertise south of the border to enhance customers’ supply chain efficiency into and out of Mexico,” Katie Farmer, BNSF’s group vice president of consumer products, said in a statement.

Although the railroads promise competitive “truck-like” intermodal transit times, unlike truck shipments, intermodal rail shipments moving via the new service will not have to stop at the border for customs clearance. Instead, shipments travel in-bond, clearing customs at Mexico origins and destinations.

But, the new service announcement comes at a time when it is decidedly unclear what the incoming Trump administration will mean for US-Mexico trade. The president-elect made it clear on the campaign trail that he would begin a wholesale reevaluation and renegotiation of NAFTA during his first 200 days in office.

It should be noted that NAFTA not only did away with tariffs between the countries on the continent, but cleared the way for streamlined customs clearances on both America’s northern and southern border — an efficiency that crossborder surface transportation services have come to rely on to attract business.
Article 2205 of NAFTA specifically lays out that one of the three countries party to NAFTA “may withdraw from (the) agreement six months after it provides written notice of withdrawal to the other parties.”
Still, dismantling the entire 22-year-old trade pact between the United States, Canada, and Mexico would be a herculean feat. “It’s like a marriage that’s lasted 22 years, and the kids are grown,” said Laura Hernandez, UP’s senior business manager for intermodal, who spoke at the 2016 JOC Inland Distribution Conference in Memphis just last week.

Similar to marriage, divorcing the United States from NAFTA would be messy. Renegotiation and reconciliation already seems a more likely option and US, Canadian, and Mexican leaders have expressed more interest in hashing things out rather than scrapping their decades-long partnership. The president-elect will assume office Jan. 20.