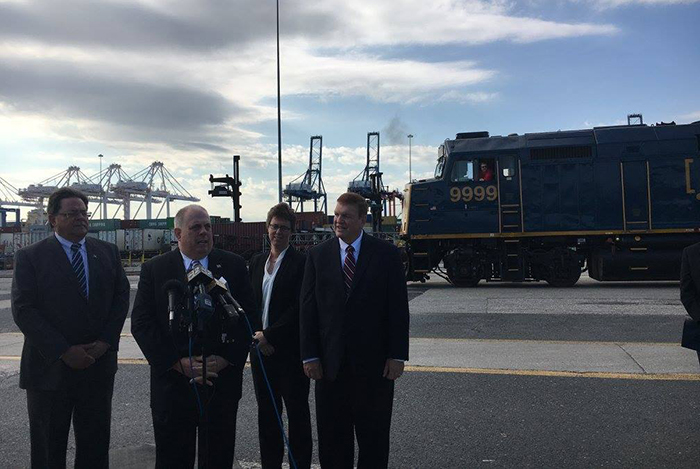 With the head of CSX Transportation at his side, Maryland Governor Larry Hogan pledged Monday to reapply for federal funding to retool a tunnel so that the railroad can double-stack containers on lines connecting to the Port of Baltimore.

Hogan, at an event to promote the project with CSX Transportation Chairman and CEO Michael Ward, said it’s vital to raise the ceiling of the 121-year-old Howard Street Tunnel in Baltimore, after the US Department of Transportation passed on awarding the projects a sought after $155 million.

Supporters say the tunnel upgrade would be the final enhancement to a port that is otherwise primed to compete — it already has on-dock rail capability and can accept New Panamax ships, with a 50-foot deep channel and 50-foot berth. The ability to take double-stacked trains would give shippers better access to the Midwest and make it more competitive with the port of New York and New Jersey and Virginia, supporters say.

The $425 million project was rejected in July, however, in a fiercely competitive process in which the federal government received 212 applications requesting a total of $9.8 billion. In the end, 18 grants totaling $600 million were picked. Federal funding would have plugged the missing third of funding needed to raise the ceiling on the 1.7-mile, as  the state has pledged $145 million and CSX Transportation said it will contribute $125 million.