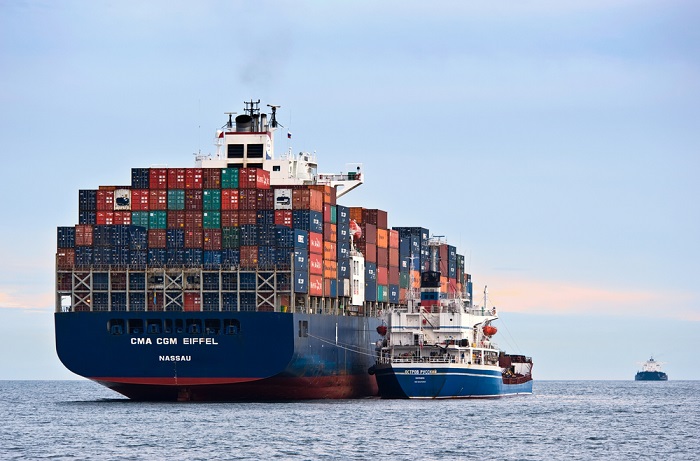 IMO 2020 has the potential to change costs for freight that never comes close to the open sea. Photo credit: Shutterstock.com.

The performance of the North American intermodal sector often is dramatically affected by exterior market forces. That was certainly the case in late 2017 when the electronic logging device (ELD) enforcement threw the trucking industry into a shortage that had big intermodal implications lasting to today. Another such instance may be looming on the horizon — that of the International Maritime Organization’s (IMO’s) low-sulfur cap on international shipping, due to take effect in January 2020. The implications for North American intermodal are varied and run the gamut from beneficial to troubling. In the former category is the potential for a halt or even a reversal of the West Coast-to-East Coast import routing migration that has been under way for a number of years. Potentially rising diesel prices might also provide an intermodal tailwind. But intermodal may find the volatility that will possibly occur during the transition to be hard to handle.

The regulation, due to take effect Jan. 1, 2020, will slice the allowable sulfur fuel content cap from the current 3.5 percent to just 0.5 percent. Essentially three options are available to ocean carriers to meet the requirement: first, install scrubbers on their ships; second, utilize alternative fuels such as liquid natural gas (LNG); or third, switch to very-low-sulfur fuel oil (VLSFO) in place of the current high-sulfur fuel oil (HSFO). Given that implementation lies just months from now, and the technologies for either of the first two options are in their infancy and largely unproven, the ability of the industry to implement either of the first two options on a wide scale is very limited at best. It seems that the third option is the most likely, and that option is the one with the biggest intermodal implications.

There is little question that VLSFO will cost more per ton than current HSFO does, although the size of the potential increase is the subject of lively debate. Current average bunker prices are running slightly below $400 per ton average. Some projections call for VLSFO price premiums of $300 per ton or more. What would that mean?

Maersk Line has published a table providing sample bunker adjustment factors (BAFs) for various major trades. For Asia to the US West Coast, the BAF varies from $390 per FEU, if bunker is priced at $400 per ton, to as much as $683 per FEU, if bunker hits $700 per ton. Hong Kong to New York via the Panama Canal is 76 percent further than Hong Kong to Los Angeles. Assuming that Maersk applies the same methodology, the BAF into the US East Coast would range from $687 to $1,203 per 40-foot container. The differential between East Coast and West Coast routing goes from $297 at current bunker prices to as much as $520 with bunker at $700 per ton. That means, all else being equal, that rates into the East Coast would rise by over $220 more than rates into the West Coast.

It is also highly likely that in the face of dramatically higher fuel costs, the ocean carriers will turn in time-honored fashion to super-slow steaming as a fuel conservation measure. A 12 percent reduction in sailing speed from 17 knots to 15 knots will add 2.1 transit days to the West Coast and 3.7 days to the East Coast. The transit penalty into the East Coast via all-water would increase by 1.6 days.

All this has major intermodal implications because it potentially will affect the tradeoff between intermodal and all-water routing to eastern North America. The 12-month moving average of the West Coast’s share of North American inbound TEU has been dropping for years, although it has stabilized and even edged up of late. If the existing rate differential between East Coast and West Coast routings increases by $220 per box while the transit time penalty increases by 1.6 days, this trend could be upended. These two elements could combine to change the calculus of port routings. Swing freight destined for interior North American points will trend back to West Coast routings. This will benefit intermodal because the length of haul off the West Coast is long and intermodal’s share is much higher than off the East Coast.

This change is certainly not inevitable. Bunker costs may not rise as much as forecast. Ocean carriers may choose to influence routing by manipulating rates to keep the differential about where it is now, or they might not be successful in passing all the surcharges along. Eastern railroads may change their rates to help maintain competitiveness. All this will influence shipper behavior.

Additionally, the VLSFO middle distillate fuel occupies the same refining space as over-the-road low-sulfur diesel fuel. While the two products are not identical, they will compete for refinery feedstocks, capacity, and existing low-sulfur fuel inventories. The likely result will be an increase in the price of diesel coupled with dramatic declines in the price of HSFO, which will suddenly be in oversupply. Thus, IMO 2020 has the potential to change costs for freight that never comes close to the open sea and indirectly benefit the more fuel-efficient intermodal movement of freight.

Offsetting these intermodal benefits will be the potential for a chaotic transition and substantial market volatility during a changeover period that might run months or even years. The industry is already seeing negative outcomes from existing ocean carrier schedule variability in places such as Los Angeles/Long Beach. If that is the current “normal,” what the transition to IMO 2020 compliance will look like is anybody’s guess at this point.

In sum, IMO 2020 may work to intermodal’s benefit, but the transition could be a painful one in the near term.