Challenges mount for US intermodal rail

Challenges mount for US intermodal rail 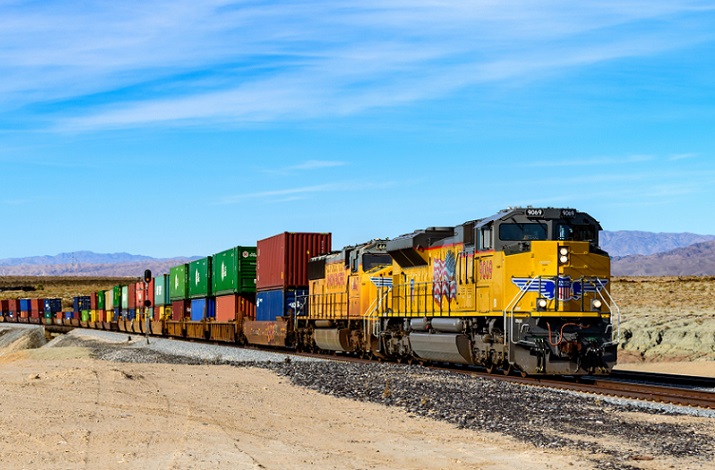 For intermodal, 2018 was a good year, the best in some time. But it also was a year of missed opportunities. Photo credit: Shutterstock.com.

As a new year for US transportation begins, the question of what’s to come inevitably comes to the fore. For intermodal, 2018 was a good year, the best in some time. But it also was a year of missed opportunities. Rather than a springboard for future gains, the industry’s performance may have created new challenges that will need to be overcome in the coming months. Meanwhile, big changes are under way in the underlying intermodal network and service offerings, with uncertain implications for the industry’s growth prospects.

The United States is emerging from a period of exceptionally tight truck capacity, the tightest since hours-of-service (HOS) regulations were changed in 2004. The electronic logging device (ELD) mandate that took effect in December 2017 leveled the playing field among truckers and provided powerful enforcement of the HOS rules.

Truckers reacted rationally by scheduling more conservatively, no longer willing to take the risk of tight shipper schedules and running out of hours. This lowered productivity and created an immediate need to add more drivers — a need the industry was unable to meet in the near term. The result was a period of tight capacity while the trucking industry worked to gain enough drivers to right-size the fleet to meet the demand.

For intermodal, success in such a market simply meant having available capacity. Shippers weren’t particularly sensitive to speed, reliability, or price as long as they could get their load moved in a reasonable manner. But intermodal’s limitations, in the form of rail service deterioration, shortages of dray capacity, and an inadequate supply of domestic containers, limited the sector’s gains and may have left a sour taste in some shippers’ mouths.

As often happens in such situations, the solution to the trucking shortage lay in the responses to the crisis. Adjustments in driver pay and conditions have enabled truckers to add drivers, and shipper responses such as decreased use of live loading and other driver-friendly changes have improved productivity. Even throughout the busy 2018 holiday season, evidence mounted that trucking was beginning to return to a more normal state, and this should continue into 2019.

A major wild card is overall US economic growth. Although the tax cut and increased government spending have provided a near-term boost to GDP, economists’ general expectation is that economic growth will slow to the previous trend-level next year. As GDP goes, so goes demand for freight transportation. The rate of growth in demand also will slow under those conditions.

For intermodal, this means the focus will shift from a capacity story to a much more normal competitive posture versus truck. Gains will have to be won the old-fashioned way: by earning them.

Roughly 65 to 70 percent of all intermodal activity is tied to import-export flows, a measure that includes transloads but excludes cross-border North American Free Trade Agreement movements. It stands to reason, then, that a big chunk of the 2019 intermodal outlook rests on international trade trends.

The prospect of a deepening trade war, of course, has injected an unusual amount of uncertainty in the question. Trade growth was relatively strong in 2018, but the push and pull of tariff developments have affected the timing of cargo movements and likely shaved some volume off last autumn’s peak.

Now the prospect is for a strong finish as imports sprint to get across the finish line prior to the threatened next round of tariff increases. This may have boosted fourth-quarter 2018 volume — the December US-China truce that yielded an agreement to delay the latest round of tariffs for 90 days came after many importers had already shipped goods to beat the original Jan. 1 imposition date — but it was at the direct expense to this year’s first quarter.

Meanwhile, there is the important question of port routings. Import migration from the US West Coast to the East and Gulf coasts has been evident. While US West Coast inbound TEU volume was up 3.6 percent in the first 10 months of 2018, the combined East and Gulf coasts were up 6.8 percent over the same time frame. This can generally be considered an intermodal-unfriendly trend in that lengths of haul off the Eastern Seaboard are generally shorter than off the West Coast, so intermodal has to work harder to compete for its share.

Another source of uncertainty lies in the ongoing restructuring of the US intermodal network, particularly in the east and across the intermodal gateways. The tide of intermodal network expansion occurring in recent years appears to have peaked and has started to ebb. Secondary lanes are being pruned and at least some terminal closures may occur. Steel-wheel interchange has been curtailed for many lanes in another back-to-the-future move. But a potential offset is the extension of BNSF Railway’s network deep into the eastern region to CSX Transportation’s Northwest Ohio ramp.

The general theory is that by simplifying the network, the streamlined intermodal product will be faster and more reliable, engendering traffic gains in core lanes that exceed the secondary lane volumes that have been sloughed off. Time will tell if the strategy will be successful.

The overall situation warrants cautious optimism. The economy is starting 2019 with a head of steam and is unlikely to slow abruptly. This should provide a solid basis for intermodal growth. The fundamentals, however, point toward more challenging competitive conditions, making it likely that growth rates will moderate versus 2018.