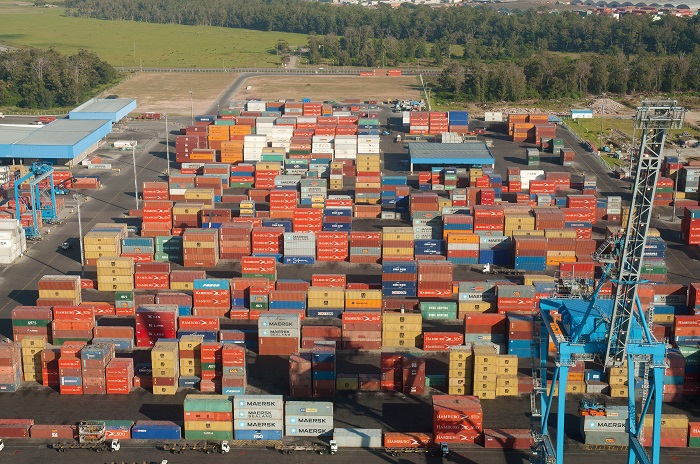 Brazil has turned a corner, trade is picking up, and the economy is doing quite well despite Brasilia’s political problems, and most shippers and service providers are optimistic for the year. That was the predominant message from Brazil’s Intermodal South America Conference in São Paulo, Brazil — a generally upbeat conference, with sentiment boosted, like much of international trade, by improving GDP growth in the Americas, Asia, and Europe.

This year’s conference — the largest of its kind on the continent that brings shippers, carriers, and service providers under the same roof — also was significant because Argentinians and Uruguayan professionals returned in greater numbers. The port of Buenos Aires sponsored a stand for the second straight year and box facility Terminal Zarate hosted one for the first time in more than 15 years. Furthermore, the return of the Mercosur to the contingent bodes well for already buoyant trade lanes to/from the east coast of South America (ECSA).

Marcelo Procopio, container terminal project manager for Porto Acu, the new port complex to the north of Rio de Janeiro, said he is optimistic regarding 2018, as were many other intermodal trade professionals.

“The economy grew just 1 percent last year, but because it had contracted by up to 3 percent in previous years it felt like quite a lift,” said Procopio, who is also involved in a small import/export business and is a veteran of nearly every intermodal South America trade show. “And this year there are estimates for growth of between 2.5 percent and 3 percent, which should bolster the economy and create more trading opportunities.”

Many conference participants said they expected trade growth — a view in stark contrast with the air of despondency at the two previous intermodal shows, especially last year.

“Last year everyone was particularly depressed because more and more of our horribly corrupt politicians were being exposed,” said one chicken exporter who spoke on condition that he not be identified. “But then, you know what, it seemed like the commercial community just decided, ‘Okay so we have a corrupt generation of politicians, but hey, so what, let’s just get on and do our business and ignore that rubbish, and make the country better in our own way.’ And that is what has been happening. Despite Lava Jato [the criminal investigation undertaken by the Federal Police of Brazil] and the fact we have no viable candidates for the presidential elections in October, we are all just getting on with it. IM is especially vibrant this year.”

In his opening speech, Mauricio Quintella, Brazil minister for transport, ports, and civil aviation, promised to kick-start port privatizations and expansion again and push ahead with a new dredging format for the Port of Santos. He moved that process during the conferece and declared that the new tendering process was nearly ready.

Ocean Network Express (ONE) CEO Jeremy Nixon’s presenatation described how the merged Japanese carriers’ new network — which goes live in April — will operate in South America, using São Paulo as one of five regional headquarters worldwide. Nixon was also very upbeat about the region, as was Peter Duifhuizen, ONE regional head for Latin America.

“Latin American economies are growing very strongly right now and they have certainly bounced back since 2015,” Nixon said, in a side interview with JOC.com. “We are seeing positive GDP numbers, the Asian economies are strong, and global trade is quite optimistic for the year, so it is all quite encouraging. For the region we are expecting more trading in consumer goods, the auto parts market and especially in the reefer trades. We can see more beef exports to North America and China this year and Argentina’s exports are also improving.”

Duifhuizen, a former Maersk Line executive with extensive South America experience, said the start of the year was “more than encouraging.”

“Export markets from the ECSA have seen strong growth, rising 15 percent last year, and for the first month of this year we saw 18 percent growth,” Duifhuizen told JOC.com. “Imports are also up, so trade is farily balanced now.”

Another conference theme was technology and e-commerce. MIT professor Yossi Sheffi, on behalf of Abralog (the Brazilian Association of Logistics), highlighted the impacts of Revolution 4.0, including automous trucks that operate with minimal human interaction in Denver and Massachusetts.

“They can travel 2,700 kilometers [1,678 miles] without stopping. The market needs to be aware of and overcome these cultural barriers,” Sheffi said. “In the long term, we will have a decrease in distribution centers and the end of the carriers as we know them today.” As of March, no autonomous trucks were operating in Brazil.

Meanwhile, freight forwarders expressed their concern about mergers and takeovers in the container shipping sector, which may end up squeezing their slice of the market if they do not innovate.

With the above in mind, Panalpina announced it has launched in Brazil a health care (part refrigerated) warehouse, in Cajamar, São Paulo state, dedicated to medicine cargoes, and is looking at other ways to differentiate its business.

“Mergers such as Maersk Line and Hamburg Süd are impacting the market and that means there are fewer carriers to negotiate with,” said Marcelo Caio Bartolini D’Arco, managing director for Panalpina Brazil. “We used to negotiate here with 20 different carriers, but now it is just five. This reduces your power not only on the negotiating side but also on the solutions side and can mean some will be hostage to things out of their control.

“We want to stay among Top Five Freight forwarders in the world so will have to keep improving and innovating, with ideas like  health care, to stay there,” D’Arco said.

There was also great optimism in the port sector that, finally, new privatizations can go ahead and existing organized port concession holders (as opposed to private terminals) can be granted the 25- and/or 35-year extensions they have been lobbying for during the past two years.