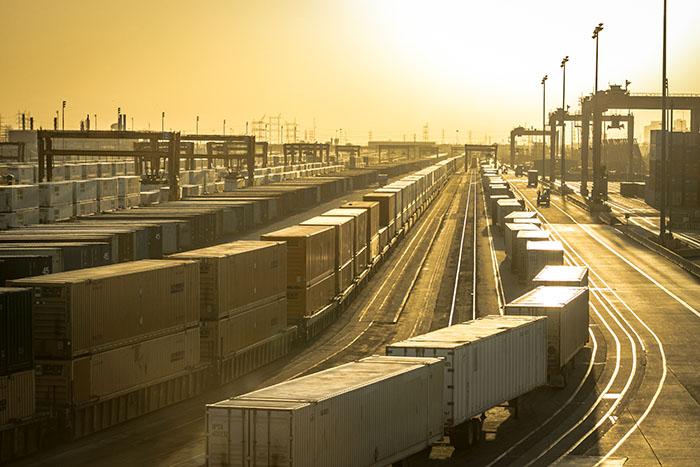 Through the first 10 months of 2019, movements of international intermodal containers in the US were up 0.1 percent year over year, while domestic moves were down 6.4 percent, according to the Intermodal Association of North America (IANA). Photo credit: Benjamin Clapp/Shutterstock.com.

When all is said and done, 2019 will almost certainly go down in intermodal history as an “annus horribilis” — Latin for “horrible year.” And what a year it has been.

At the end of October, year-over-year growth in movements of international containers via rail, which came in at 5.4 percent in 2018, stalled, registering a barely measurable year-to-date gain of just 0.1 percent, according to figures from the Intermodal Association of North America’s (IANA) Equipment Type, Size and Ownership (ETSO) database.

And that, compared with performance in the domestic intermodal sector, is the good news! Domestic container volume through the end of September was down 6.4 percent year over year. That’s quite a cold shower for the industry after enjoying a 7.6 percent year-over-year gain in 2018, due in no small part to a trucking capacity crunch caused by the federal electronic logging device (ELD) mandate.

It’s fair to point out that comparing this year with last year’s inflated results may not be painting a true picture. Indeed, comparing year-to-date international moves through September with the same period from 2017 shows a gain of 6.8 percent. But even against the easier 2017 comparison, domestic volume is still up only 0.6 percent. That’s essentially no growth in domestic intermodal for two years, even while the economy was expanding at a fairly brisk pace.

It’s also fair to characterize this year’s drop as unprecedented. Domestic container loadings declined 5.6 percent in the first 10 months of 2019. Assuming the year remains in the red, it will be the first year-over-year decline in domestic container activity. Even during the Great Recession, domestic container loads declined slightly only for a couple of quarters, and still managed to register a gain for the year. Further, from the peak in the second quarter of 2018, the share of long-haul truck shipments handled via domestic intermodal declined for four straight quarters before stabilizing in the third quarter of 2019 — another unprecedented event since 2000.

In discussing the cause for the decline, railroad quarterly financial presentations point the finger at excess truck capacity. This is certainly true, but it’s not the whole story.

A big piece of the puzzle is the transition of most of the railroad industry to Precision Scheduled Railroading (PSR). This, along with the attendant relentless focus by the railroads on lowering their operating ratio, has contributed to intermodal volume losses, even as railroad operating and service metrics have improved and profitability largely has been maintained.

The structure of international intermodal meshes quite well with the dictates of PSR, which calls for the operation of very large point-to-point trains with minimal intermediate work events. Mega-ships deliver mega-discharges of traffic to the railroads, so big trains are a natural inland extension. Service frequency isn’t much of an issue when the door-to-door transit time for overseas origin to domestic destination is measured in weeks.

But none of this applies to domestic intermodal. Domestic truckload flows are complex, dispersed, and service sensitive.

After expanding the intermodal network throughout the first half of the decade, the railroads under PSR largely have reversed course and embarked on a great simplification effort. Steel-wheel interchanges have been eliminated, and service to secondary locations has been axed. Pressure, in the form of widening rate differentials and trailer-on-flatcar (TOFC) service cutbacks, is being brought to bear on the remaining TOFC traffic to convert it to container. Demurrage rules have been tightened. Most importantly, the railroads have attempted to hold the line on rates or even attempted increases, even as the trucking market softened.

Domestic intermodal volumes have inevitably been affected. According to PSR advocates, this reflects “the pain before the gain,” the necessary process of streamlining and optimizing the intermodal product offering in a way that will eventually yield volume growth plus improved profitability.

Those advocates point to intermodal growth in Canada as evidence supporting this theory. But movements of domestic intermodal equipment within Canada were down 11.6 percent in the first 10 months of 2019, even worse than the decline in the United States. Close examination reveals that the Canadian growth story is actually one of gains in cross-border movements of international containers. In other words, it represents share shift rather than an increase in the size of the intermodal market.

All this portends a difficult 2020 for intermodal. Economic growth is slowing, burdened by the US-China trade dispute and uncertainty wherever one turns. Much depends on the future course of US trade relations, which are impossible to predict from one tweet to the next, but freight demand also will be under pressure, and 2019 intermodal headwinds — including the flow of import cargo toward East Coast routings — are likely to persist. The most likely scenario is minimal growth of 1 to 2 percent.

The domestic outlook depends heavily on the course of the economy, but it also depends greatly on whether the railroads maintain their current approach. It takes more than just running the trains on time to convert traffic from the highway. Once lost, shipping customers demand great incentives to convert back to the rail. There is little reason to expect intermodal to regain lost share if the current approach is maintained “as-is.”

With growth in truck freight projected to slow to a crawl, it’s unlikely that a tightening truck market will come to intermodal’s rescue. A hopeful outlook is that domestic intermodal stabilizes at current levels, but substantial volume gains may remain out of reach.