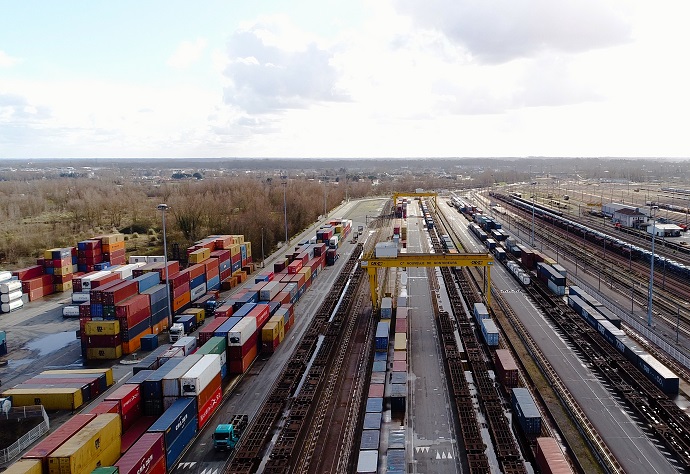 There is a lot of potential volume out there for intermodal to tap if it only could solve the interchange dilemma. Instead, the sector seems to be moving in the opposite direction. Photo credit: Shutterstock.com.

The recent announcement of the imminent cancellation of interline service on almost 200 joint Union Pacific Railroad-CSX Transportation lanes transiting Chicago promises to scramble peak season plans for many intermodal shippers. But setting the near-term disruption aside, what does it say about the ability for intermodal to growth longer term? It will likely result in further concentration of intermodal share in a relatively smaller sliver of the total market.

Gross Transportation Consulting has teamed up with Noel Perry of Transport Futures to produce what JOC believes is the first-ever measurement of intermodal market share by mileage range.

Figure 1 sets out the distribution of US dry van and reefer freight by mileage range. Only freight that originates and terminates within the United States is included. The green columns show the percentages for all such truck moves, while the gray columns exclude local and short-haul truck moves of fewer than 250 miles from consideration. Of the roughly 111 million dry van and reefer heavy-duty truck moves that occurred in the United States in second-quarter 2018, more than 54 percent were short-haul moves of 250 miles or fewer. About 50 million truckloads moved 250 miles or more and therefore might be considered “intermodal eligible.” Looking at the gray bars, the mileage distribution for truck follows a very familiar and straightforward pattern. The longer the haul, the fewer trucks are moving. Indeed, only 3.6 percent of all intermodal-eligible truck moves took place in the intermodal “sweet spot” of between 2,000 and 2,500 miles.

The teal columns present similar data for intermodal. (These percentages are approximations that were produced by reviewing the Intermodal Association of North America ETSO US region-to-region intermodal data and assigning a mileage range to each region-pair. A further caveat is that the percentages are likely distorted by rubber-tire transfers across interchange points, which would tend to boost volume in the 750- to 1,000-mile and 2,000- to 2,500-mile segments at the expense of very long-haul “transcontinental” type moves.) The distribution of intermodal activity looks nothing like truck. It is what a statistician would call a “bimodal distribution” with peaks in the 750- to 1,000-mile and 2,000- to 2,500-mile ranges.

Figure 2 combines these statistics to produce a rough idea of intermodal market share by length of haul. The results are striking. Overall intermodal share was about 10.1 percent of all dry van and reefer truck moves of more than 500 miles in second quarter 2018 and 6.8 percent of such moves over 250 miles. (These figures are lower than previously published numbers mainly due to the inclusion of reefer truck volume in the totals.) Intermodal share in the 2,000- to 2,500-mile range towers over all other ranges at over 42 percent. In distant second place is the share of 750- to 1,000-mile hauls at more than 12 percent.

A simplistic look at intermodal economics versus truck would lead one to expect that intermodal share would rise as length of haul increases. The further one goes on low-cost rail, the better the economics versus truck. But obviously things don’t work that way in the real world. Intermodal share in the 1,000- to 2,000-mile range is lower than 750- to 1,000-mile range, even though the length of haul is longer. Intermodal’s share of ultra-long-haul moves is also much lower than that of 2,000- to 2,500-mile.

Interchange appears to be the issue. Take, for example, a move from California to upstate New York. Rubber-tire interchange across Chicago versus steel-wheel interchange adds two lifts (off at the western railroad’s Chicago terminal and back on at the eastern road’s Chicago facility across town) at about $50 each, plus the cost of the cross-town dray (which can run as low as $100 to as high as $300 depending on which terminals are involved). The total is somewhere in the range of $200 to $400, offset to a limited extent by the elimination of the switching move across town for the steel-wheel move. For a long-haul move of perhaps 3,000 miles, that works out to a perhaps-tolerable 6 cents to 12 cents per mile. But for a haul of 1,000 miles that happens to traverse Chicago, it means a likely prohibitive 20 to 40 cents additional per mile. For a load coming from California, once that container or trailer is grounded in Chicago, it may stay on the highway for the rest of the way. Shorter-haul moves via Chicago, such as, for example, Minneapolis-Atlanta, may truck the entire way rather than deal with the complexity of the Chicago crosstown.

When intermodal appears to work best

Intermodal appears to work best when only one railroad is involved and there is no interchange. Single-line hauls from the west coast to Chicago of more than 2,000 miles work great. Single-line hauls within the eastern territory also seem to work well although the competitive economics are more difficult. But the industry just doesn’t seem to cope very well with interline and the task of dividing both the required work and revenue to everyone’s satisfaction. The difficulties of blocking trains for multiple destinations in a complex intermodal network seem to defy the industry’s ability to consistently handle the issue. It’s easier to simply build a single conveyor belt that terminates in Chicago and allow the streets of the city to function as the sorting hub.

How big is the foregone volume opportunity? For a quick “back-of-the-envelope” analysis, assume that instead of the current market share picture, intermodal share ramps up steadily from the existing 12.4 percent at 751-mile to 1,000-mile range to the existing 42.1 percent at 2,000-mile to 2,500-mile ranges. That would imply a share of 22 percent in the 1,000-mile to 1,500-mile range and 32 percent between 1,500 and 2,000 miles. It would mean more than 1.5 million intermodal revenue moves per quarter, an increase in overall volume of 43 percent.

Obviously this is an extremely simplistic analysis that ignores a host of other considerations. But even setting that aside, the message is that there is a lot of potential volume out there for intermodal to tap if it only could solve the interchange dilemma. Instead the sector seems to be moving in the opposite direction.

A coast-to-coast railroad merger wouldn't be prudent for a host of reasons. However, if there is an argument in favor of such a combination, this is it. A combined east-west entity would burst through the interchange barriers. Chicago and the other Mississippi River interchange points would become just stops on the national intermodal network rather than the impediments that they are today. In recent years when such a merger was being contemplated, the rail industry’s general posture was that a merger was not required because the railroads already knew how to work efficiently together. Based on recent actions can the industry really say that? A great deal of potential volume awaits the answer.