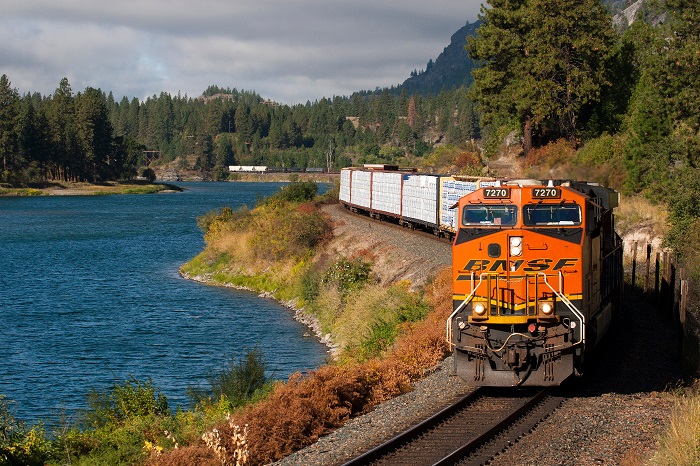 In the past, resourceful supply chain managers always had alternatives in their hip pocket to meet the unexpected, for a price. Not this year. In 2018 shippers should not expect surge freight capacity. Photo credit: Shutterstock.com.

Cargo owners accustomed to the availability of surge freight capacity — at a price — may find 2018 to be the year when it all changed.

In the past, resourceful supply chain managers always had alternatives in their hip pocket to meet the unexpected. Tight truck capacity? Use more intermodal. Intermodal service hiccups? Just dip a bit deeper into the qualified trucker carrier list to get the loads moved. But what happens when those trusty alternatives don’t work? And what are the chances of a real crunch?

While anecdotes can be very useful, there’s no substitute for data. Looking at a number of data points to see how bad things could get shows the news is not very good.

Data point #1 is truckload spot market rates, which are a useful, if volatile, measure of pressure in the marketplace. The Trans4Cast data from Truckstop.com and FTR show the extent of the problem The Trans4Cast Market Demand Index (MDI) is a simple ratio of loads posted versus trucks posted. Based on the past five years, a typical MDI level for right now should be below 20. Going into June, the MDI was running in the low 40s. In June it leapt up into the 60s and most recently was 98 percent higher than the prior year over the last four weeks. Dry van spot rates were up over 24 percent versus the prior year over the same time frame. Conclusion: things are already stretched exceptionally tight and barring a slowdown, there’s no reason to expect anything different in the coming months.

Data point #2 is the demand for dray capacity. The situation in the dray markets has implications for both short-haul trucking and intermodal. The new Drayage Demand Index (DDI), a product of a partnership between Gross Transportation Consulting and Drayage.com, is signaling unprecedented tight conditions and extreme volatility. Most recently the index stood at about 200 — twice the normal level of 100. That sounds (and is) very tight, but it is a big improvement from a couple of weeks earlier when the DDI stood at an astronomical level of almost 300. From a seasonal intermodal perspective, June is normally a good but not exceptional month, running about 1.4 percent stronger than average. What’s going to happen in October, which during a normal peak season turns in volumes that are 8.8 percent higher than the average month?

Data point #3 is domestic container productivity. The industry was caught by surprise by the upswing in volume as the electronic logging device (ELD) implementation approached and so entered the period with too small a fleet. But the situation was greatly exacerbated by disruptions in the flow of the rail-owned domestic container fleet, which impeded interchange of these boxes between railroads and reduced the fleet’s productivity. The situation has improved this year but not returned to normal. Comparing May with last September, the last normal month before the rail-owned container problem commenced, revenue moves occurring in private domestic containers were up 9.7 percent while those occurring in rail-owned domestic containers were up only 2.4 percent over the same time frame. With demand outstripping supply, this indicates either that more new boxes flowed into the private fleet versus the rail, or that rail box productivity has come down, or (most likely) a combination of the two.

Data point #4 is intermodal service. Average train speeds continue to deteriorate. Since the beginning of the year, system average intermodal train speeds have dropped 1.4 miles per hour from 30 miles per hour to 28.6 miles per hour. That is a reduction of almost 5 percent. If the average domestic container spends one-third of its time on the rail, slower train speeds alone will result in a reduction in fleet capacity reduction of 1.6 percent. Put another way, the industry needed 4,500 more boxes to handle the same amount of freight in May than it would have needed if trains were running as fast as they were in January.

That probably understates the problem. When train speeds decline precipitously as they have this year, that doesn’t just mean slow trains, it means late trains.Lack of schedule reliability wreaks havoc with productivity across the board. Trains begin bunching up, which generates peaking problems in terminals. Unexpected slack periods between trains waste capacity because resources are lined up for work that is stuck out on the rail. Delivery appointments are missed, resulting in customer dissatisfaction but also tying up containers and chassis that now must await the next available appointment slot, which might be days later.

Fleet owners are responding to the situation by adding boxes. Based on what is known, the best guess is that the industry will see net additions of around 7 percent this year. Additionally, planned retirements of old units that are due this year may well get pushed back into 2019 to help the industry through the autumn peak. Nevertheless, as the industry was already running full tilt during the fourth quarter of 2017, it’s hard to see how gains could exceed 7 to 8 percent by the time peak season rolls around.

But it doesn’t matter how many boxes are in the fleet if they can’t get delivered, and that’s where drayage comes in. The long-haul dray sector is in trouble. Now that ELDs are the law of the land, carriers are simply unwilling to take on long-haul drays that push the envelope of what can be achieved within the limitations of the hours-of-service regulations. At the same time, the eastern railroads are trimming lanes connecting secondary terminals, mandating increased use of long-haul dray in order to access the intermodal network. When shippers can’t find drayage when they need it, the delays tie up containers and chassis and suck capacity out of the system.

What can shippers do?

What can shippers do about all this? First and foremost is to give themselves the slack that the carriers can’t currently provide, by moving the goods earlier. There is a sign that this has occurred. Using preliminary June import data from PIERS, imports for the second quarter of 2018 were up only 1.2 percent over 2017. That pales in comparison with the first quarter gain of 7.5. So did shippers see volume upstreamed/frontloaded to the earlier quarter? Perhaps, but what does that mean going forward with regard to peak season volume?

A second action, to invoke a somewhat over-used but still meaningful phrase, is to do everything possible to be a “shipper of choice.” Carriers will make sure to earmark their scarce capacity to those true partners that place an appropriate value by making sure to keep the drivers and equipment moving.

The days when shippers could count on carriers to pull the fat out of the fire when things get tight appear to be over. Surge capacity will be very costly, if it is available at all. This will make it even more difficult to meet the ever-increasing service demands of today’s e-commerce influenced buyers.