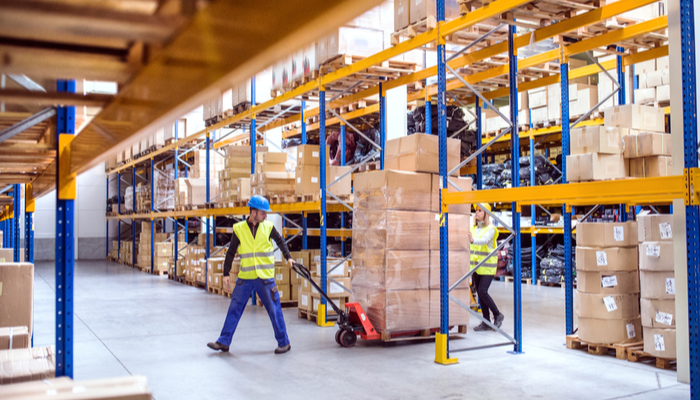 Warehouse space was tight even before the pandemic, with a national 6 percent vacancy rate at US warehouses and distribution hubs according to industrial real estate firm JLL. Photo credit: Shutterstock.com.

A scarcity of workers at warehouses and transloading operations, coupled with a surge in imports — much of it tied to e-commerce — is causing containers to pile up near some US ports and putting pressure on marine terminals due to unreturned chassis.

The worker scarcity, created by elevated unemployment benefits reducing the incentive to work and workers’ fears of contracting the coronavirus disease 2019 (COVID-19), is most sharply felt by facilities that deconsolidate ocean containers before smaller shipments are trucked out, logistics executives tell JOC.com. Such operations are more labor-intensive and are experiencing sharper volume surges than traditional warehouses due to serving the e-commerce sector.

“Warehouses are getting quite full,” said Scott Weiss, vice president of development at the Port Logistics Group (PLG), which operates 17 warehouses across the country, including Southern California, New Jersey, and the Southeast. “The supply chain is really challenged from the beginning [ports] to the end [warehouses], including the last mile.”

Weiss said PLG has been receiving requests from importers and other warehouse operators looking for additional storage space. Warehouse space was tight even before the pandemic, with a national 6 percent vacancy rate at US warehouses and distribution hubs according to industrial real estate firm JLL.

Seasonal labor availability is about 30 percent to 40 percent less than it was a year ago, and that reduction approximately equates to the same loss of storage capacity, according to one senior warehouse and distribution executive who asked not to be identified. Normally, there’s a backlog of cargo in October and November, but it’s building now, he added.

“What we’re competing against this year is the supplemental unemployment benefits and the wage competitiveness to get people to come to work on a regular basis, which we have never seen before,” the executive said. The average warehouse pay rate is $15 to $18 per hour, but with the additional $600 in unemployment insurance provided by the federal Coronavirus Aid, Relief, and Economic Security (CARES) Act, recipients are receiving what equates to between $22 and $25 per hour, based on a 40-hour work week. “We’re going to see the pressure from labor shortfalls at deconsolidation facilities first, because those volumes peak earlier, before it goes to a customer’s warehouse to go to stores or e-commerce,” the source said.

Longer chassis dwell times at warehouses and delays at marine terminals in Southern California are slowing the return of equipment. For example, 80 percent of truck turns completed by Golden State Logistics are performed with its own chassis, so any delays at terminals eat into its drayage capacity, said Fred Johring, president of the drayage operator. Similar to other truckers in Southern California, Golden State is also struggling to secure appointment slots to return empty containers to marine terminals.

“Dual transactions are virtually impossible. It’s getting worse,” Johring said. Securing more chassis is also difficult. He said an intermodal equipment provider told him the IEP is willing to move chassis to Southern California from Houston, but he would have to pay the IEP to reposition the chassis from Houston.

Out-of-service chassis are running about twice the level they should be, said Weston LaBar, CEO of the Harbor Trucking Association. It is becoming increasingly difficult in Southern California to secure domestic containers and trailers, he said. That’s reducing the equipment necessary to handle outbound domestic and intermodal moves from the transloading warehouses in the region, LaBar added.

“Ocean freight is showing up faster than the warehouses can handle. It’s a huge constraint,” LaBar said. He said similar issues are migrating up the West Coast, but not nearly to the extent he is seeing in Southern California.

“In three weeks' time, the trade has eaten through 3,600 chassis. That’s almost unheard of,” Noel said. “Everybody can get a chassis, but it takes a little bit longer than we would like. New York and New Jersey remain fluid, everything is going, but there may be a little delay.”

Global Shipping Outlook: A Sneak Peek at 2021
Port Performance North America: Managing Cargo Flow During a Pandemic — and Beyond
END_OF_DOCUMENT_TOKEN_TO_BE_REPLACED