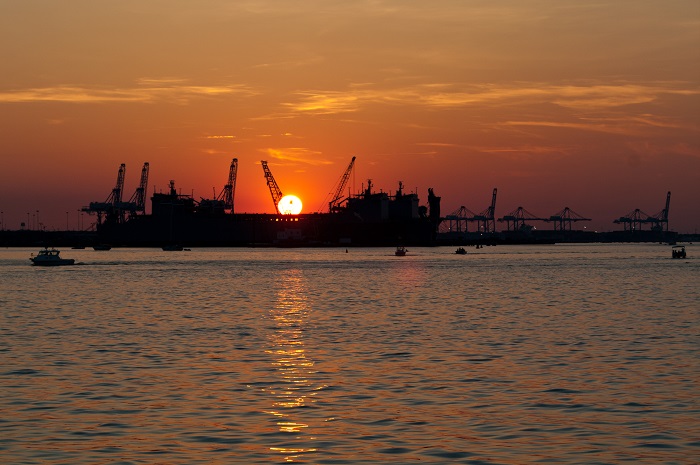 The Port of Virginia has scored a major victory to deepen its harbor to 55 feet and make the location one of the most attractive on the US East Coast for beneficial cargo owners. (Above: The Port of Virginia at sunset.) Photo credit: Shutterstock.com.

The Virginia Port Authority has received the green light on $350 million for a dredging project to deepen its harbor from 50 feet to 55 feet by 2024, with the aim of being able to handle up to 19,000-TEU ships transiting through the Suez Canal.

The state budget was hammered out by lawmakers in a special session and sent to Gov. Ralph Northam on May 30. The final document includes $20 million in design funds and authorization to issue $330 million in state-back bonds to pay for deepening the Norfolk Harbor from 50 to 55 feet at low tides and widen the ship channel from 1,000 to 1,300 feet east of the Chesapeake Bay Bridge-Tunnel.

“As part of our preliminary engineering work, we will be modeling and simulating 16,000-, 18,000-, and even 19,000-TEU vessels to ensure the project is completed not just for the vessels calling today, but for the vessels calling well into the future,” said Cathie Vick, chief public affairs officer at the Virginia Port Authority, who added the design work is due to begin July 1.

Although several steps remain, the Port of Virginia is set to become the deepest harbor on the US East Coast as more ocean carriers reassign their 10,000-TEU to 15,000-TEU vessels to US routes, when they receive new 22,000-TEU vessels for Asia-to-Europe service. In theory, beneficial cargo owners (BCOs) can receive cheaper rates via post-Panamax ships because the greater economies of scale can be passed on to customers by carriers. But if marine terminals and inland networks can’t handle the import surges mega-ships produce, shipments can be delayed.

The ports of New York and New Jersey and Halifax can handle vessels up to 18,000 TEU.

Mega-ships should produce economies of scale

“Having economies of scale with these larger vessels, BCOs will expect some of those cost savings will trickle down to them. We expect this will mean Virginia will have additional first ins [port of arrival] or last outs [port of departure] with the steamship lines able to sail in and out without any restrictions,” said David White, vice president of the Virginia Maritime Association — a consortium of draymen, shippers, and freight forwarders.

The Port of Virginia is one of several locations on the eastern seaboard digging to prepare for the future, although these 15,000-TEU to 20,000-TEU vessels would not fit through the Panama Canal. The Port of Charleston is in the middle of a project to deepen its inner harbor to 52 feet and outer harbor to 54 feet by the end of 2020. The ports of Miami, New York, New Jersey, and Baltimore are 50-feet deep at low tide. A deepening project at the port of Savannah is slated to be completed in January 2020, bringing the depth of the inner harbor to 47 feet and the outer harbor to 49 feet during low tides. The US Army Corps of Engineers has also approved money to dredge to 47 feet in Jacksonville, aiming to complete the work by 2021, and for the Port Everglades, Florida, to deepen its draft to 48 feet.

Virginia is targeting 2024 as a rough estimate on completion.

Just as important is the construction to widen the navigational channel east of the Chesapeake Bay Bridge-Tunnel from 1,000 to 1,300 feet. The US Coast Guard currently stops marine traffic when a larger ship enters or exits the port. The widening would allow unabated two-way traffic to resume and lift one of the restrictions that can throw a vessel off schedule.

“As the regular calls from these 14,000-TEU vessels grow from three to four times a week to seven to 10 times per week, then our window for two-way traffic tightens. So we want to accommodate two-way traffic well into the future,” Vick said.

All eyes now on US Congress, Army Corps of Engineers

Total laden traffic at the Port of Virginia rose 4.8 percent year over year in 2017 to 2.2 million TEU, faster than the national increase at 4.2 percent, according to PIERS, a sister product of JOC.com. Laden import volume rose 6.8 percent to 1.2 million TEU, slightly ahead of the 6 percent expansion of US import volume, while exports rose 2.3 percent to 955,813 TEU, ahead of the 1.2 percent increase in US exports as a whole.

Now attention turns to the US Congress and the US Army Corps of Engineers. Lawmakers have marked up the Water Resources Development Act, which would authorize work to deepen the Thimble Shoal channel to 56 feet, the Atlantic Ocean channel to 59 feet, and the widening project. The main project to dredge to 55 feet has already been approved. The next step would be the corps’ annual report of the chief of engineers to reaffirm that 55 feet is the appropriate standard and outline the cost sharing breakdown. Finally, the port would then lobby for federal funds in either the Congressional budget or the corps’ work plan.

The Virginia state budget allows the port authority to front load the money to begin design and construction without federal dollars right away. Eventually, however, the port will need federal funds to complete work by 2024. Design work should be complete in 2020 and then construction would begin.

How to Improve OTIF: 15 Tips for On Time and In Full Delivery
END_OF_DOCUMENT_TOKEN_TO_BE_REPLACED