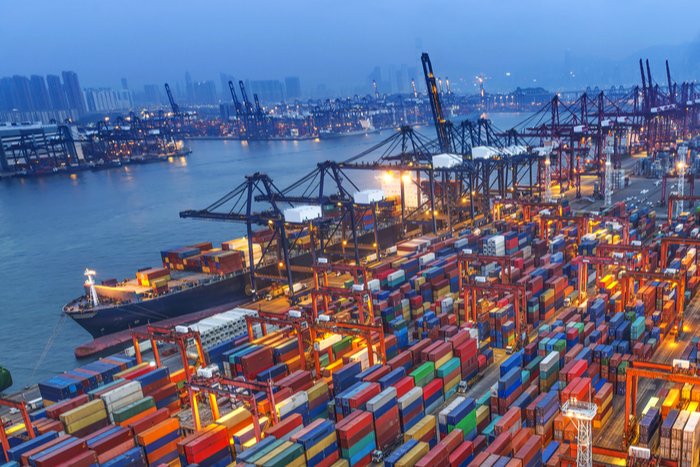 Carriers this week have begun to announce blank sailings through August in the eastbound trans-Pacific. Photo credit: Shutterstock.com.

The coronavirus disease 2019 (COVID-19) and the United States-China trade war are taking a toll on US containerized imports and exports, with most ports registering year-to-date declines in both categories in early 2020 and expecting a cautious rebound from importers in the second half.

US import and export volumes in the first three months of 2020 show a continued trend toward growth of East and Gulf Coast ports at the expense of West Coast ports. East Coast ports increased their market share of total US container volumes by 2.3 percentage points compared with January-March 2017 to 49.5 percent, according to data from PIERS, a JOC.com sister company within IHS Markit.

The Gulf ports increased their market share 1.9 percentage points to 10.8 percent of US containerized imports and exports. West Coast ports lost 4.1 percentage points of the total US market since 2017, bringing their combined share to 39.1 percent during the first quarter of 2020.

Port directors tell JOC.com cargo volumes may start to pick up in the second half of the year as retailers ship holiday-season merchandise. However, two of the three major carrier alliances this week announced they would continue blanking sailings in the third quarter. Carriers base their decisions on blanking future sailings on the information they receive from retailers about purchase orders in Asia, so this week’s announcements from THE Alliance and the 2M Alliance about 42 additional blank sailings from June 1 to Aug. 9 indicate retailers expect a weaker peak season than in past years.

After more than two consecutive years of growth in the US container trade, the total laden imports and exports declined 4.6 percent in the first quarter of 2020 from the same three-month period last year. Highlighting the devastating impacts of the US-China trade war and COVID-19 pandemic, the 10 largest ports in the US all registered declines in laden container volumes, according to PIERS.

The Port of Los Angeles and the Northwest Seaport Alliance (NWSA) of Seattle and Tacoma each recorded declines of more than 15 percent in total container volume, with those ports’ heavy reliance on imports from and exports to China contributing to the drop in volume. The other top 10 gateways, especially East and Gulf Coast ports which are more diversified in their trade with Europe and Latin America, registered declines in the low- to mid-single-digit range.

Due to a shift of manufacturing from China to countries further to the south, the Port of Los Angeles must “reinvent itself” by seeking to attract more exports to the growing economies of Southeast Asia, the port’s executive director Gene Seroka told the virtual Agriculture Transportation Coalition (AgTC) conference last month. By attracting more export commodities from the US interior, Los Angeles aims to provide carriers with added round-trip revenues, making services to the Pacific Southwest more cost competitive with East Coast services via the Suez Canal, Seroka said.

From January through April, total containerized US imports declined 5.5 percent from the same months last year. Imports fell 10.1 percent in Los Angeles and 17.3 percent at the NWSA. Most of the other top-10 ports registered declines in the low- to mid-single digits.

Containerized exports to the world, data for which is available through March, declined 2.4 percent in the first three months of the year. Los Angeles experienced a 17.7 percent decline in exports during the first quarter, while exports in neighboring Long Beach increased 3.4 percent. The Southern California port complex has a dozen container terminals, and the three container carrier vessel-sharing alliances shift calls among the terminals throughout the year, which may explain the variation in the volumes between the two ports.

Houston, which has benefited the past year from a surge in resins exports, outperformed other top 10 ports with a 14.1 percent increase in outbound container volume. Resins manufacturers the past few years have invested billions of dollars to expand production of resins and other plastics in the US Gulf Coast region.

“Natural gas is still plentiful and cheap, and there’s been billions of dollars of investment in these facilities to produce plastic, so they are going to keep producing,” Roger Guenther, executive director of the Port of Houston. US resin exports through the busiest Gulf Coast gateway jumped 30 percent year over year in the first quarter, according to PIERS.

Exports of refrigerated (reefer) products to Asia were the one bright spot in the containerized trades in January-March. US reefer exports increased 20 percent from the same period last year. US exporters of protein products have diversified their markets in recent years. Also, despite the trade war, China continues to import frozen pork from the US because a swine flu has reduced  domestic production of pork. US imports of reefer products, meanwhile, declined 4.4 percent year over year in January-April.

Container volumes moving through West Coast ports continue to slip due to a heavy concentration of shipments to and from China and North Asia. As manufacturing expands in Southeast Asia, East and Gulf Coast ports are better positioned than West Coast ports because the all-water routing from Asia through the Suez Canal becomes more cost competitive.

Sam Ruda, executive director of the Port of New York and New Jersey, told the AgTC virtual conference the shift of US sourcing to Southeast Asia is contributing to the port’s increased market share as carriers expand their Suez Canal routings.

“New York has slightly more Suez services than Panama services, and this will grow because of Southeast Asia,” he said.

Trans-Pacific carriers deploy or reduce capacity based upon US import volumes, which command freight rates up to four times higher than backhaul export rates. As such, port directors look to carrier announcements on blank sailings as an indicator of retailers’ purchase order fulfillments in Asia three to five weeks out.

Port directors recently told JOC.com that blank sailings peaked in May, and based on carrier announcements at the time, canceled sailings would decrease in the third quarter. However, after the port directors spoke with JOC.com, carriers on Wednesday suddenly announced a flurry of blank sailings that will take place from June through August as retailers begin to pull back on purchase orders in Asia.

According to data provided to JOC.com Wednesday by Sea-Intelligence Maritime Consulting, carriers will blank 42 sailings from Asia to North America from June 1 to Aug. 9. That compares to a total of 117 canceled sailings from early February through the end of May.

Recovery from the economic impact of the COVID-19 crisis may be uneven throughout the US as each region has set its own timetable for reopening the economy, and that could have an impact on coastal port volumes in the coming months.

“You see the economies in the Southeast are opening back up. I would hardly call it a return to normalcy because it’s certainly not when you look at air travel, but our forecast for the next year is kind of a steady incline over four quarters,” said James Newsome, CEO of the South Carolina Ports Authority.

The Port of Norfolk had 59 blank sailings scheduled from April through July, said John Reinhart, CEO and executive director. He said the coming couple of months will be rough, although the port anticipates “some stabilization” after that.

“We are committed to come back in September with an updated forecast based on what we see over the summer because it’s still really fluid,” Reinhart told JOC.com.