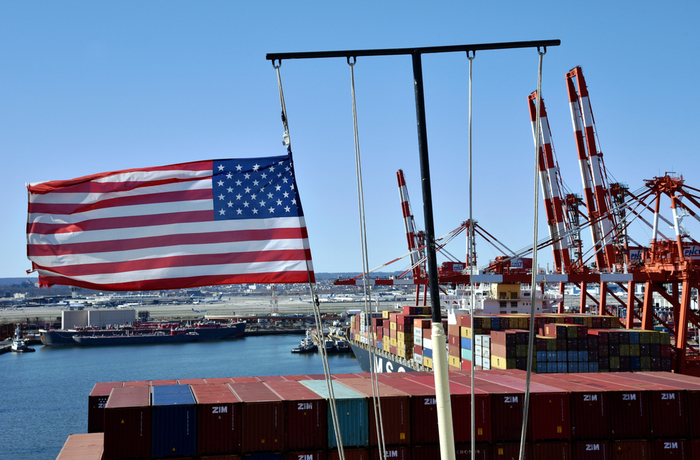 Keeping the containerized supply chain flowing amid this environment of hyperchange, reflected by stop-and-go and then stop again US import flows, will take industry cooperation. Photo credit: Shutterstock.com.

With container lines, ports, and forwarders warning of US port congestion from imports piling up at marine terminals in the coming weeks, the industry is facing the near-term threat of a bottleneck unlike any it’s ever seen.

If more US retailers and manufacturers fail to pick up containers — either because warehouses are full or closed due to not being deemed essential service providers responding to coronavirus disease 2019 (COVID-19), or because retailers have requested delayed deliveries at distribution centers — ports may start running out of places to store incoming shipments.

Keeping the containerized supply chain flowing amid this environment of hyperchange, reflected by stop-and-go and then stop again US import flows, will take industry cooperation. That cooperation will be guided both by the high-minded charge to help the greater supply chain and the simple fact that neither carriers nor shippers can afford to burn the other too badly, lest those disagreements cloud trans-Pacific service contract negotiations and the broader relationship.

The threat that this kind of disruption poses “is the biggest we have ever seen,” said Jon Gold, vice president of supply chain at the National Retail Federation. “All the ports need to get stakeholders together to prepare. No one knows when this is going to end. But if we’re not talking as an industry about a way forward, we’re going to fail.”

It’s a scenario like no other. The 9/11 attacks raised the alarm on dirty bombs in the supply chain and the 2014-15 West Coast port crisis paralyzed Asian imports, but never before has there been the potential for so many cargo owners to simply not receive cargo, endangering the entire supply chain as a result.

“The conveyance of cargo has been pretty fluid, and I can’t say a backup has started. Having said that, we are anticipating it,” said George Goldman, the US president of Zim Integrated Shipping Services. As of the last week in March, utilization on Asia-US services has been high, and Goldman said he is expecting four to six weeks of heavily loaded calls at US ports before the import volume falls off.

The pace at which North American importers have cancelled, minimized, or delayed ocean shipments has been abrupt, upping the urgency for the industry to respond and collaborate to keep containerized supply chains flowing. In early March, many US importers were scrambling to get goods out of China after coronavirus-related restrictions delayed restarting of factories after the Lunar New Year by several weeks, and carriers responded with expedited services. Approximately three weeks later, forwarders began seeing a building wave of ocean shipment reduction and postponements from shipper customers.

Complications have ensued. Simon Kaye, president of Jaguar Freight Services, said a supplier of goods to a big-box retailer on March 31 told him the retailer was refusing to receive the shipment and needed help from the forwarder to destuff containers. On Monday, the big-box retailer said it would accept the shipments now that they’ve arrived at port, but then five minutes later it canceled the receipt of five containers from its supplier that are already on the water and set to arrive within two weeks.

“We really haven’t seen how deep this is going to go yet. The airlines have been decimated and have cancelled an unprecedented amount of flights,” Kaye said. “We haven’t seen a direct impact on a major shipping line or a major drayage company. God forbid we see a Hanjin situation,” referring to the 2016 collapse of the South Korea-based container line.

To its credit, the industry is marshalling a response. Container lines are urging cargo owners to pick up their containers in a timely manner and return empty containers. The Ocean Carrier Equipment Management Association (OCEMA) said it was concerned with the availability of chassis, particularly in relation to inland movements.

Container lines are also offering shippers options to mitigate demurrage fees by allowing them to store containers at their properties. US port authorities, including the Georgia Ports, New York-New Jersey, and the Pacific Northwest Seaport Alliance are working to add more storage space.

Acknowledging the threat of congestion, the Federal Maritime Commission via a fact-finding effort launched March 31 and led by FMC commissioner Rebecca Dye is bringing key maritime executives to work together to ensure cargo flows smoothly through the nation’s ports in the coming weeks.

While the scale of the potential congestion is uncertain, it’s fair to assume there will be an increase in detention and demurrage disputes between cargo owners and forwarders, and marine terminals and carriers. By the end of April, the FMC is expected to finalize and vote on a new interpretive rulemaking that may give some clarity to how the industry should work through detention and demurrage disputes. Essentially, the rule would provide the agency a lens through which to determine whether demurrage and detention fees are “reasonable” by considering whether the fees truly incentivize the timely retrieval of cargo and return of containers.

Cargo owners have urged the FMC to adopt the rulemaking, saying they are too often penalized for factors outside their control preventing the pick-up and return of containers such as port congestion and severe weather. With thousands of workers furloughed and many retailers worrying they won’t be able to open again, Gold said the last thing such importers need is to get hit with charges for actions that are out of their control.

But the proposed rulemaking, which carriers warned was too broad and goes beyond the agency’s regulatory power after reviewing the original draft, won’t change the fact that violating the rule carries no civil penalty. The agency offers mediative services, but both parties have to agree to come to the table. At best, the rulemaking will foster better dispute discussion and warn off bad actors.

Ultimately, the industry will have to wrestle through the potential spike in detention and demurrage disputes via commercial negotiations. This will test relationships, but there is also an opportunity for carriers and cargo owners to come out of this with stronger relationships as parties share the pain together.

Goldman, for example, said Zim is willing to help cargo owners with storage issues over the coming weeks, but there needs to be a “a quid pro quo when we go into contracting.” And if goodwill doesn’t force parties to work through this together, the reality that they will need to work together in the foreseeable future will have to suffice.