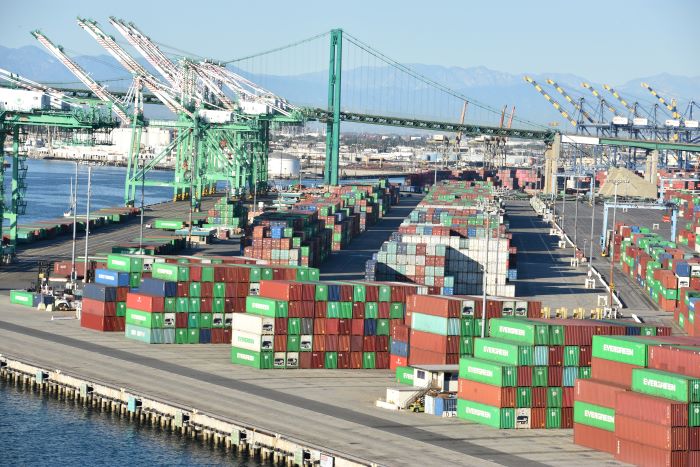 There’s no end in sight to the Asian import surge, even if there are expectations that consumer goods spending will shift toward dining and travel as vaccinations increase. Photo credit: Shutterstock.com.

The US container shipping system has maxed out its capacity, and on the back of what’s shaping up to be the sharpest US economic recovery since 1984, there are growing signs that it will only get messier in the foreseeable future for shippers and their transportation partners.

Some cargo owners are already raising product prices because of port disruptions and higher shipping costs, while wholesalers have less flexibility in adjusting more fixed prices with customers. The drumbeat of companies complaining of higher logistics costs isn’t letting up; retailer Dollar Tree told investors on Mar. 3 that import and domestic freight rate increases will add $80 million to $100 million in additional costs in fiscal 2021.

The elevated volumes have been unrelenting. On a year-over-year basis, US imports from Asia have risen by double-digit percentages in every month since August 2020, according to data from JOC.com's parent company, IHS Markit. During the 13-month period from Aug. 1, 2020, through Aug. 31, 2021, imports are projected to be at or above 2 million TEU in 11 of the 13 months, according to Global Port Tracker, which is published monthly by the National Retail Federation and Hackett Associates. Before last year, monthly US imports from Asia had only hit the 2 million TEU mark once, in October 2018.

This week, new economic forecasts suggest the US economy is heating up faster, with IHS Markit predicting a 6.2 percent expansion this year. That’s a 0.5 percentage point upgrade from the company’s expectations for the US economy just a month ago.

“The 6 percent GDP growth some US economists are forecasting for this year could be conservative. Based on what our customers are telling us, I don’t think 10 percent growth is out of the question,” XPO Logistics chairman Brad Jacobs wrote in a note to shareholders on Tuesday.

Steady and elevated retail demand and a manufacturing rebound will weigh further on a port and inland network system that’s looking even more stressed than it was four months ago. Congestion has spread from Southern California up the coast and onto the East Coast and to inland hubs such as Chicago and Memphis.

Bringing congestion to heel remains elusive for Los Angeles-Long Beach marine terminals despite labor, chassis, and warehouse availability improving, according to marine terminal operators. Even though railcar availability is gradually returning to levels seen before winter storms disrupted rail networks in February, terminal operators say they need far more train arrivals to dig out of the congestion, which began building in the summer.

“On the West Coast, nothing has changed … it’s just spread around the country like a virus,” said Brian Kempisty, founder of Port X Logistics, a US port trucking provider. “LA was the epicenter, and then New York got hit, and then Norfolk and Savannah started getting hit, and now you have the rail ramps in Chicago and Memphis. It’s just an overwhelming amount of imports that seemingly has hit every single market.”

The limits to digging out when the inbound pressure won’t let up doesn’t appear unique to Southern California, either. A recent JOC analysis of laden imports at US ports and the ports of Vancouver and Prince Rupert, Canada, over the last three years suggests the current surge isn’t as strong as year-over-year comparisons show, and thus volumes have hit a level at which it is harder for ports to catch up.

As last month’s Suez Canal blockage underscored, there’s always the chance of more disruption, even with supply chains stressed the most they’ve been in years. For example, escalating tit-for-tat actions between Montreal port employers and longshore workers are pushing Canada’s second-largest port toward another bout of disruption.

There’s no end in sight to the Asian import surge, even if there are expectations that consumer goods spending will shift toward dining and travel as vaccinations increase. US retailers say they’re pulling volumes at record or near-record levels through August, and they can’t keep up with demand, as reflected by the inventory-to-retail sales ratio hitting a near 30-year low in January.

“The market right now is really being limited more by capacity than demand, and so that creates some momentum of its own, natural momentum as containers — or loads — that can't be moved now will have to move later,” Brian Sondey, chairman and CEO at Triton International, the world’s largest container lessor, told investors in late February.

With no evidence that US import demand will wane in the coming months, the retail demand cycles for back-to-school shopping, Halloween, and the winter holidays will ramp up the pressure through the traditional August to September peak season and through the fourth quarter, said James Caradonna, general manager pricing/Americas at M&R Forwarding and Multi Container Line.

“Our concern is as we hit May, how realistic is it that the carriers can provide allocations against new contract MQCs (minimum quantity commitments), given what is likely going to be a dramatically reduced capacity situation, in good part because of the Suez Canal incident?” he said.

Over the last seven months, US importers of Asian-made goods needing guaranteed loadings and to be first in line for equipment could shell out so-called premiums of $2,500 to $3,000, rather than wait for weeks for a booking to be assigned a vessel. That’s becoming less of an option as the demand for premium service outpaces what carriers can promise, Caradonna said.

Eastbound container spot rates from Asia to the US West Coast have been above $3,000 per FEU since September and remain 80 percent higher than a year ago, according to Xeneta, a rate benchmarking platform.

“At a certain point of time, the rate level is almost irrelevant to a carrier when they are faced with this much operational disruption and such a backlog,” Caradonna said.