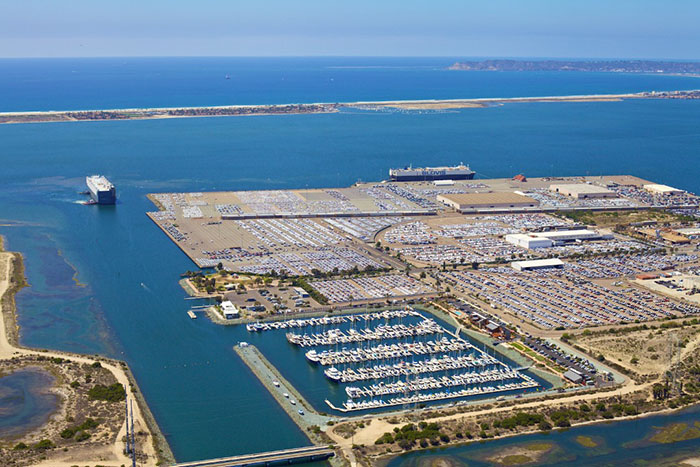 The port of San Diego

Southern California ports are expanding where they can and squeezing existing capacity to handle vehicle shipments that have risen steadily since the Great Recession.

The ports of San Diego, Port Hueneme, Los Angeles, and Long Beach handled a total of nearly 1.2 million vehicle imports and exports last year. That total included about one-fourth of all vehicles shipped into the US market, where sales have nearly doubled since 2009.

The increased volume has strained capacity at the region’s ports, which have limited acreage for expansion. Ports and terminal operators are reconfiguring terminals, promoting increased rail shipments, and encouraging the speedier flow of automobiles off the docks.

San Diego, which handled 460,000 units during its most recent fiscal year, is working on several short-term and long-term projects as part of a broad effort to increase capacity at its National City terminal operated by Pasha Automotive Services.

The National City terminal was designed in the 1970s as a container terminal but was converted to autos as Southern California’s container traffic became concentrated at the ports of Los Angeles and Long Beach.

At first, the terminal served the big Southern California automobile market. In the 1990s, the port, Pasha, and BNSF Railway collaborated to extend the San Diego gateway’s reach to Texas and other inland points.

A key step was construction of a “balloon” or loop track that enables direct transfer of vehicles to unit trains without having to move the railcars back and forth during loading. About half of the cars leaving the port move via train for inland distribution in other states.

As San Diego’s auto volume has increased, the port has run into periodic capacity constraints. The port has been implementing a multi-step plan to increase the terminal’s capacity.

“The good news is, our numbers are robust. The bad news is, we’re at capacity,” said Joel Valenzuela, the port’s maritime director. “We’re working on short- and long-term projects to accommodate growth.”

Meanwhile, the port is moving ahead this year with shorter-term projects to reconfigure roadways and remove unused utility fuel tanks in order to provide more contiguous space for autos. Those projects could be finished within the next few months, Valenzuela said.

Together, the rail connector, roadway reconfiguration, and removal of the tank farm is expected to increase the terminal’s annual capacity to 600,000 to 800,000 units, he said.

Like other US West Coast ports that handle autos, San Diego’s vehicles come mostly across the Pacific from Asia. However, as auto production continues to expand in Mexico, San Diego sees growth opportunities there.

The port has handled trial shipments of autos built in Mexican plants that have good access to their country’s Pacific ports, and importers are weighing the relative costs and transit times of rail and water shipment from Mexico, Valenzuela said.

Port Hueneme, about 60 miles north of downtown Los Angeles, also is working on a variety of improvements aimed at increasing its capacity. During its last fiscal year, the port handled about 300,000 units of import vehicles and 38,000 units of exports. The combined volume was more than double the 155,800 units of imports and exports in 2009, at the nadir of the recession.

Port officials say congestion has not been a problem at Hueneme, but that they are working to stretch capacity by promoting increased use of rail and encouraging reduced dwell time at the terminal. The port is studying possible construction of a multilevel building that would provide denser storage of autos.

The port has approximately 34 acres of on-dock and near-dock land available for auto storage. Nearby processing and distribution centers of WWL Logistics, BMW of North America, and Glovis have more than 165 additional acres.

The port's four stevedores meet each Monday to agree on how to share space at the terminal. “They all understand that it’s a multi-use terminal, and that they have to work together,” said port spokesperson Dona Toteva Lacayo.

The ports rely heavily on off-dock storage and processing facilities such as the one that Mercedes-Benz operates near the Long Beach airport, about 10 miles from the ports. But there are near-port sites with the large acreage that port auto facilities require but tend to be scarce and expensive.

At the ports, the space squeeze is intensified by auto companies’ tendency to store cars longer at terminals. When sales slow, dealers seek to minimize inventories by delaying deliveries. With container volumes continuing to grow, ports lack the wide-open spaces that autos require.

Marcel van Dijk, business manager at the Port of Los Angeles, which handled 200,000 units of auto imports and exports last year, said the port has reached its maximum capacity for the next few years.

“We are not looking at a new terminal for cars, which need a lot of acreage or a parking structure, which is very expensive and adds to the possibility of damage,” he said. “We plan to maintain what we have and work with the terminals to find an extra four or five acres here, or 10 acres there.”

How to Improve OTIF: 15 Tips for On Time and In Full Delivery
END_OF_DOCUMENT_TOKEN_TO_BE_REPLACED